The May stage race reverses direction and switches summit finishes. What else is in store for 2013?

Yesterday, the organizers of the Amgen Tour of California released the names of the race's host cities for 2013. And, it's a little different this time. The route is inverted, running from south to north in contrast to all the years before where it has flown south towards the sunny border with Mexico. And the route will stick more closely to the coast than before, though with occasional forays inwards.

What difference does running north make? Well, for one, the prevailing winds in California - particularly along the coastal regions - are from the Northwest, which may make most stages a slog into a headwind. Breakaways be warned, it will be hard out there.

But headwinds aren't the only thing we are likely to encounter in May. Let us take a look at the rest of the route, shall we? And then, maybe, compare it to the prior year. If I'm ambitious by the time we get there. We only know the start and finish cities, not the routes, but we can guess from the topography and Jen's excellent local knowledge (really, read it!) what the stages will look like. But first a map. 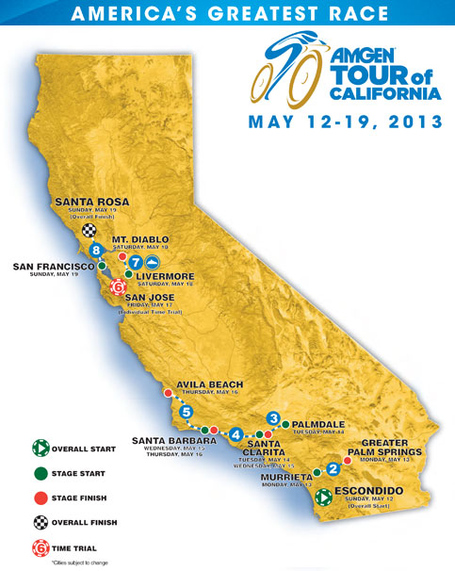 Mount Palomar is the defining topographical feature near Escondido and the AToC looooves Palomar. But Palomar, it is a ways away from the city. And it is the first stage, so if we follow tradition, sprinters should have the best chance at winning. I bet we have finishing circuits. Circuits are fun.

There are mountains between these cities, though the most logical route includes nothing nasty. Instead, the best bet is what is becoming a typical AToC stage - lots of climbing, nothing decisive for the GC, and a whole lotta favoring Peter Sagan. Also? We have desert, which could make it quite roasty in the final hour.

40 miles. That is all that separates Palmdale and Santa Clarita. And there are mountains nearby - the same range that includes Mt. Baldy, the summit finish from last year. We are likely to get a mountainy loop, but nothing decisive. More climbs, more Peter Sagan? Or maybe a breakaway for once.

Westwards, to the Pacific! More climbs, nothing too hard, then a coastal jaunt towards a terrific surfing spot - or so I've heard. Jen says to expect a big group at the finish. Who am I to disagree? This is her home turf. Maybe a "real" sprinter can win this, not a Peter Sagan?

There is a lot of coastal road to traverse here. While there must be climbing to leave Santa Barbara, the rest should be flat and, most likely, windy. Sand dunes don't do a lot to stop the breeze, you know? Coming before the time trial and subsequent mountaintop finish, I think this stage definitely has "sprinty" written all over it.

Time trial day! And, given precedent, it is likely to be flat and fast. David Zabriskie will be pleased. I wonder what his new Captain America skinsuit will look like next year? But, I should stop being distracted. There is also a women's time trial run on the same course earlier in the day. Thanks, I guess, AToC? Personally, I think a road stage and/or circuit race would be better. Maybe on another day where it can finish on a finishing circuit the men ride later. Sigh.

Attention! This is an important stage! Last year we had Mt. Baldy, this year it is Diablo - Spanish for "devil," which seems quite apt for a summit finish like this. The stats on the climb are not particularly impressive. 11 miles (18km) is long, but 5.4% is not so steep. But aggregate numbers are tricky and often hide steep ramps on climbs. The gradient is mostly even from kilometer 8 to the summit (there are some dips in the first 8km), but the final kilometer... it is rough. There will be a significant section that averages over 15%. Do you remember the Tour stage to La Planche des Belles Filles this year? Chris Froome won, but what was memorable was how everyone in the lead group more or less imploded in the final steep 200m to the line. Expect the same, except with maybe more implosion if we are lucky.

The organizers (and all the photographers!) are hoping that next year's traverse of the Golden Gate Bridge - a big deal for a bike race, you know - is much more scenic than the foggy and rain-shrouded crossing two years ago. From here we go north towards Santa Rosa, another familiar AToC stop. Because it is the last stage - and because there is much coastal road between them - it is likely to be flat. I love me a good sprint. And pictures of the ocean. Every bike race has mountains, but not many have oceans.

Break From The Past?

Aside from the change in direction, are there any significant changes to this year's AToC? Though it is hard to say without the exact route details, signs point to "yes." Each year it seems the AToC gets a little bit harder, throwing in more climbs but not increasing the number of summit finishes. This kills off the purer sprinters like Mark Cavendish (though last year he was at the Giro d'Italia) and was a large part of why Peter Sagan won such an astonishing five of eight stages (with a second place on another stage behind a breakaway) last year. Sagan could out-climb the sprinters and out-sprint everyone else. Hardly fair, was it?

This year's route looks a little more balanced. Yes, there are a lot of climbs, but not the long, climby days with a sprint finish. Gone is the stage to Big Bear Ski Resort with its 30 odd kilometer gradual climb to the finish. We still retain a time trial and summit finish, but the remainder of the stages are saner, with the possible exception of Stage 3 which will most likely be one for the breakaways with the substantial climbing it is likely to have before a descent to the finish.

The overall classification should play out in a similar fashion - you have to go fast in the time trial and climb quickly up double digit gradients. Though I'd like to see the time trial and summit finish separated by a few days, maybe with a tricky stage with a climb near the finish in between, this will suffice to generate some good action. Maybe there will be a climb earlier in the race that offers the possibility to launch an early assault on the overall classification, most likely by a long shot podium contender? I hope so. Until route details are released sometime this February, we will just have to speculate. But when speculation includes the finish atop Mount Diablo, that's enough to keep me happy for a while.