CX Sunday: Ghosts of the Cobbles in Roubaix World Cup

Share All sharing options for: CX Sunday: Ghosts of the Cobbles in Roubaix World Cup

This weekend may not be the most season-defining of the cyclocross calendar, but it will definitely be... colorful. It kicks off with the Tom Boonen invitational, and if you're saying to yourself "but he's a roadie," you're halfway to figuring out that event. Boonen and Friends is, as tgsgirl says, a time for a few laughs, this time at the expense of roadies like Peter Sagan, Thomas Dekker, Niki Terpstra, Johan Van Summeren, Gianni Meersman, and of course Tommeke himself. Former CX World Champion-turned-roadie Lars Boom usually wins, and probably will again, but that won't be the headline.

Sunday is another colorful day, for an entirely more serious reason. It's UCI World Cup time, just over the border into France, as the city of Roubaix hosts its annual CX event around the famous Paris-Roubaix-ending velodrome. That alone feels like a story, invoking some of the most famous terrain in road cycling history, and that which is universally associated with a long, painful day in the saddle. In reality, it's an urban course by any standard and doesn't come within several city blocks of a cobblestone, but it has enough tricks up its sleeve to make for a good event.

The Roubaix world cup race returns to us after a brief abscence of a few years, with the last edition being held in 2010. It replaces Igorre, which will make Albertina cry but which the rest of us won't mind so much because Igorre wasn't very interesting. Roubaix is fun because A: it loop-de-loops around the - new! - velodrome and even finishes on it, which reminds me of PR, which always good, and B: it has some very cool descents. Especially if it's muddy, which is when things get really fun. So I think we're best of hoping it rains. 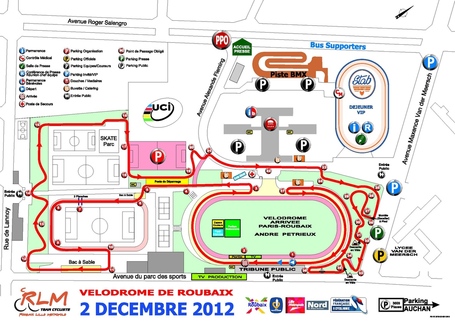 The fun stuff is on the right side of the map. The velodrome is dug down a bit and surrounded by a few meters of hill, which isn't easily climbed straight on. The video below (from an especially muddy affair -- yay!) plays this out.

Not sure where that staircase is, but I am confident it's still part of the course.

Cyclingnews has a startlist up. On the men's side, the most interesting development is the arrival of Jeremy Powers for a turn with the big boys. With the US hosting the worlds and this being a roughly analogous course (compared to, say, Koksijde), this will be a very intriguing test for Powers. If he can keep up with Sven, Niels, Klaas and Kevin in France, there's a decent chance he can do at least that back home. It's also one of the less selective events, until it turns into a swamp anyway, so that could give Lars van der Haar and some of the other speed merchants a window of opportunity. It being the UCI circuit, there's a fully international crew on hand, guys like Franzoi, Mouray, Page, Walsleben, a few wandering Scandinavians, and Ian Field, of course.

On the women's side, it's simply all hands on deck: Compton, Wyman, Harris, Dombroski, Cant, Van Paassen, Kupfernagel, and so on. Oh, and the husband-wife duo of Steve Chainel and Lucie Chainel-Lefevre, which is another slice of awesome. Please say they plan to have kids...