Each year, Tom Boonen rounds up a few dozen friends and colleagues and tells them to ride laps around the sandy shores of the Silver lake in Mol, the village right next to Balen, his hometown. All in the name of charity. Only, this time Tom Boonen was too ill to attend, which was really very sad. But I wasn't ill!

So off I went direction north and little west, to the heart of the sandy land of the Kempen region. Did I tell you how last year I had all kinds of logistical difficulties in getting to Boonencross? I believe I did. Well, this time around my car was seven years older than last time, and halfway to Mol the radio threw a serious hissyfit by stubbornly keeping up the pretence that there were no longer any radio stations broadcasting in Belgium.

That's ok. Silence is good. Makes me appreciate exactly how many different parts of my car make highly suspicious noises when riding over 90 kph. But I endured, all in the name of charity. Boonen and friends is a cyclocross race for roadies, meant to benefit Move to improve, a fund for kids with motorskill problems. Some of the riders participating are his teammates (Iljo Keisse, Matteo Trentin, Zdenek Stybar), others are training buddies (Johan Vansummeren), others are just cool enough to show up for a charity race (Peter Sagan).

Excuse the wonky colours on some of my pictures, my camera did all kinds of weird stuff. Or, I did. One of us is to blame, I choose to blame technology.

This year, the 'peloton' seemed smaller, or at least less diversified than last time. Not as many different nationalities, not as many different jersey colours either. Crowds didn't care though, and 6.500 people showed up to watch anyways. First, it was time for the 'celebrity' race, which consisted mostly of retired cyclists, with two actors and one motor-crosser added for good measure. At the start, Le Mans-style, the race commentator counted down from ten. 10, 9, 8... and off they all went, eager like 7 year old boys. So much for rules in this race.

The best racers were the former cyclocrossers, of course. The thing was won by Erwin Ververcken (in white), former world champion and retired for three years now. Second was Arne Daelmans (in black). Vervecken had to get off the bike every time at the big sandpit where I was positioned, which kinda surprised me. But he still has stilts for legs, and he still runs through sand like you and I walk on pavement. 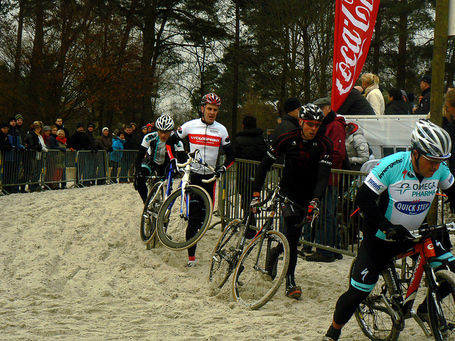 The podium was rounded of by Marc Janssens, who you might recognise as co-commentator for all the Vier cyclocross races. 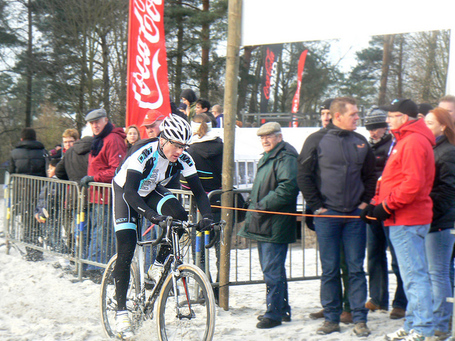 Johan Museeuw was also there, and Tom Steels, who cheated by using an electric bike. In the final lap he paced Vervecken and Daelmans away from Janssens, derny style, much to the amusement of the crowd. But with that done, it was time for the real thing.

No electric help for the roadies, but a similar start. 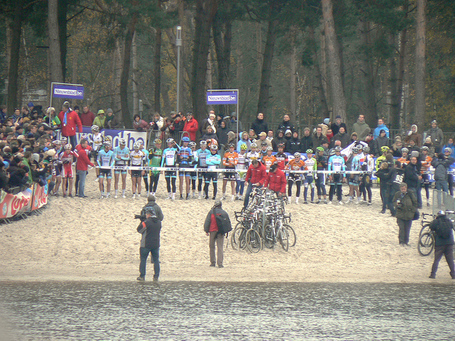 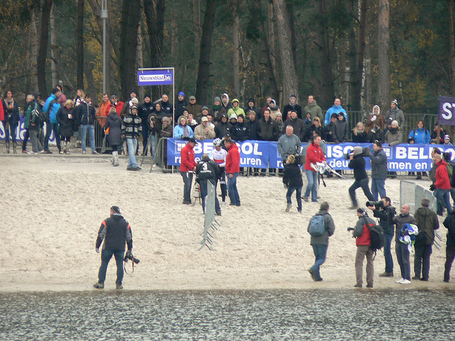 The late guy in this picture is double cx world champ Zdenek Stybar who, like Lars Boom last year, got a one minute penalty for being too school for cool. His main competition would come for the former winners of this race, and former cyclocrossers, Maarten Wynants (Rabo) and Pieter Vanspeybroeck (TSV). 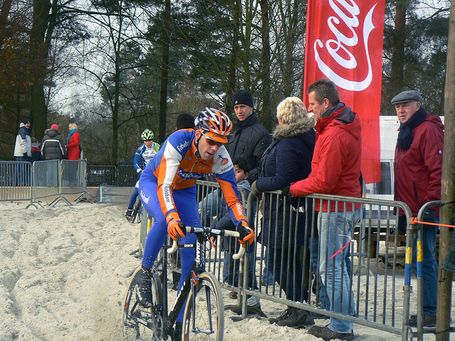 Other guys who did quite well were Frederique Robert (Lotto), Peter Sagan (Liqui) and Matteo Trentin (OPQS). 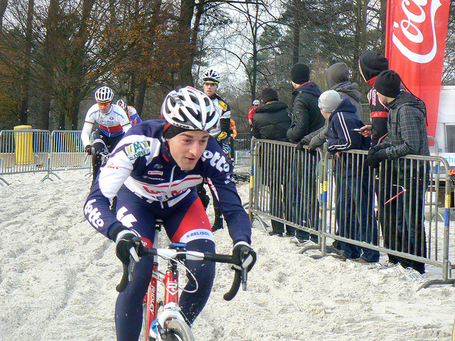 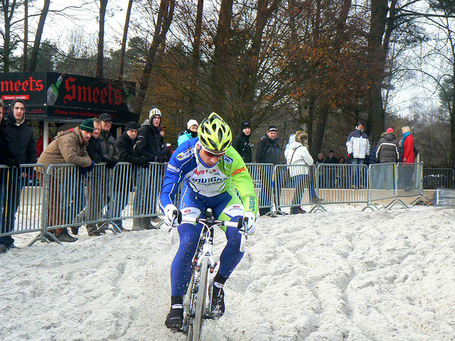 Speaking of Superior Sagan, I never really warmed to the kid (despite recognising he is crazy talented), but the fact that he showed up for this thing is a huge plus in my book. Do you know what isn't a plus in my book? Tom Boonen being so ill that he couldn't show up for his own charity race. He had a bowel infection, lost 4kg in three days and even spent three days in hospital. Thankfully, OPQS sent his stunt double, Guillaume Van Keirsbulck. 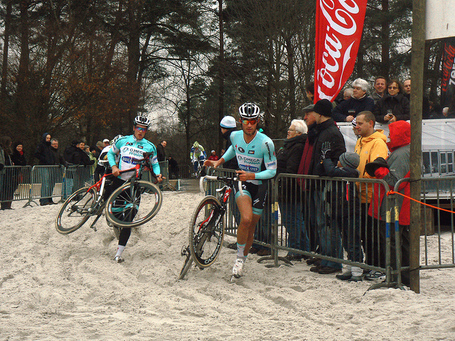 When you watch him run, it's almost freaky how similar they are. They just move in exactly the same way. Like a big cat. A lion, or a puma.

Anyway. I suppose it's less daunting to show up for an event like this when you know you're not altogether bad at this, so let's give some props to the guys who participated even though they really sucked at sand cyclocross.

There's Niki Terpstra, who I think was lapped after two laps, which is quite the feat. He was really good at the shenanigans of it all though, deliberately dropping his bike in front of others, falling down just so he messed up the chosen course of his 'competition'. 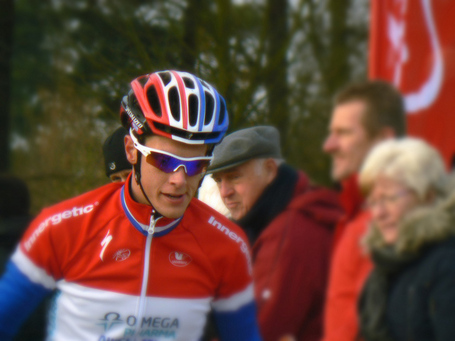 Then there's Summie, who during recon complained to the crowd "Stybar is riding this, no one told me that! That is just not fair, damn it!" He also managed to rip the inside of his bib shorts within the first or second lap. 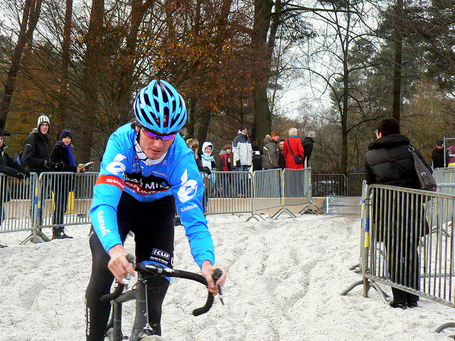 Visconti, who did so very badly last year, sent his stunt double Francisco Ventoso this time around. The champions jersey is hideous, but he did do a lot better than his Italian counterpart. Then again, couldn't have been worse. 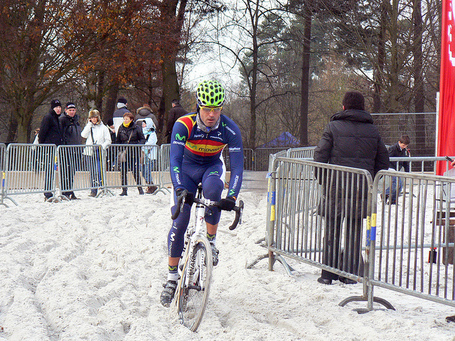 Carlos Verona was also in Mol. Carlos who? Yeah, I know. Carlos Verona is a 20 year old kid who rides for team Burgos - Castilla y Leon. For now, at least, because starting next year he'll be one of Tombo's teammates at OPQS. In the sandpit, he kept carrying his cx bike with his right hand as if he were lifting weights (instead of carrying it on his shoulder), and with his left he'd high five the fans. I like this kid already. I don't know if he can ride a bike, but he was so fun. 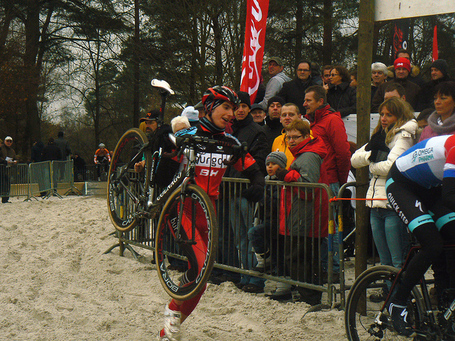 And then, the worst of the worst: Iljo Keisse. In his defence, track is a lot smoother than cx. Which is why I dislike it so much. Iljo probably agrees with me, cause in the very final lap he jokingly yelled "these laps are taking for goddamn ever!" at us. 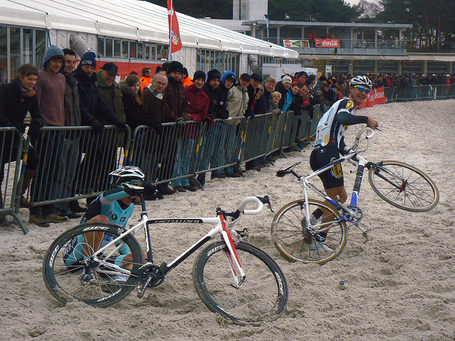 Like Terpstra, he was also very good at the shenanigans. At one point Kurt Hovelynck crashed his bike straight into one of the crowd crossings, and as he was getting up, Keisse ran by and just shoved him back into the sand.

All this happened during recon. Really, this race is fun.

None of these guys were a match for Styby though. He was clearly better than anyone else, and the way he tackled the sandpit was a pure cyclocross masterclass. He started with a one minute penalty - after one lap that was 43s, after two laps 30s, after three laps 13s and midway into the race he was in the lead. No worries. 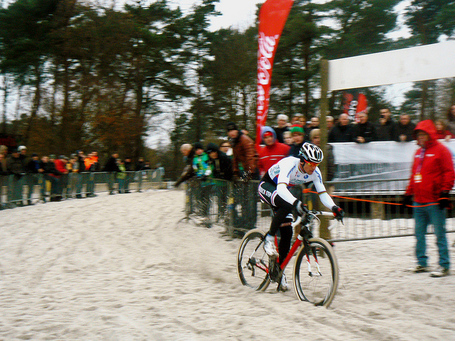 Easy as that. Stybs victorious, and Tombo from a distance too, as his charity brought in 84.550 euro for kids who don't have it easy in life. Mission accomplished!