The Srampagmano Tales, by Scarlett Parker

One of the nice things about doing these Bookshelf pieces is that people tell you about things which you might not otherwise have noticed. A couple of months back I told you about Candlestick Press's Ten Poems About Bicycles and in that wondered what other cycling poetry was out there. One answer came from Scarlett Parker, who mailed to tell me about his The Srampagmano Tales, which takes as its basis Geoffrey Chaucer's The Canterbury Tales.

Share All sharing options for: The Srampagmano Tales, by Scarlett Parker 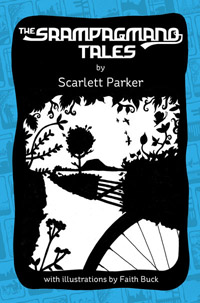 Geoffrey Chaucer, I have to confess, is one of the great gaping holes in my reading. Maybe, if you're British, you get a fed a diet of him at an early age. Being Irish, we got Peig Sayers. I do know about Chaucer and the importance of The Canterbury Tales but even the thought of the saucy bits - and they are, I've been told time and time again, particularly saucy - have never really tempted me to dip my toes into Chauver's peculiar flavour of ye olde English. One day, maybe.

Chaucer has already provided influence to one cycling book, David Walsh's Inside The Tour de France, which the Irish sports journalist modelled around the structure of The Canterbury Tales. That books is, of course, famous today for its Neophyte's Tale, in which Walsh and Lance Armstrong had that first, fateful meeting during the 1993 Tour (if you haven't already read it, look for it second-hand or in libraries - you'll be surprised how relevant it is today, not just for what it said about Armstrong). Parker's The Srampagmano Tales is a world away from Walsh, a blessed relief from all the heavy-duty finger-pointing of professional men's road racing at the moment.

The tales Parker tells here are of the roadie ("cycling's shining knight / A lycra suit of armour, sleet and tight"), the courier ("her bag is like a superhero's cape / With radio holder made of gaffa tape"), the sportiviste ("spending's not a burden for this MAMIL / Financial backbone stronger than a camel"), the trackie ("Acceleration deadly like a cheetah's / Endurance falters at a thousand metres"), the rouleur ("The great rouleur is oozing big ring attitude / From those who wheel-suck she expects no gratitude"), the fakenger ("He claims his fixie's been a lifelong passion / but rides it like it's going out of fashion"), the randonneur ("A bicycle of consummate utility / Not weighted down with gram-saving futility"), the tester ("For some his dimpled skinsuit reeks of frippery / How could this character get any more slippery") and the grimpeur ("In gravity he has a confidante / She tells him that he's wrong to think he can't").

On one level you can compare The Srampagmano Tales to Mike Maguson's recent Bike Tribes or some of the tales told in Bella Bathurst's The Bicycle Book, looking as they all do at some of the various tribes that make up the cycling family. With all of these you end up spotting people you know in the various descriptions, while also spotting parts of yourself. With all of them, you half hope you're not actually a member of any one of the tribes described, but a composite of many of them.

The conceit Parker uses to bring all these tribes together is a group ride from London to Brighton. Like the ride itself - a hundred kilometres or so - The Srampagmano Tales is just the right length to leave you wanting more when you get to the end. Given that talking about poetry is, after a while, a bit like dissecting frogs, rather than me telling you about The Srampagmano Tales, it's show time. Let's start with an excerpt from the prologue, as the Brighton-bound riders gather in London's Mecca for the moneyed cycling classes, Look Mum, No Hands:

"We'd all made plans to cycle to the coast
Which prompted a suggestion from our host:
'Amongst a group as disparate as yours
Combining your accumulated tours
Would surely conjure stories to be told
Which like the roads in front of you unfold
For roads and stories each have their beginning
The middle's navigated via spinning
And once you've finally made it to the end
What better than to share it with a friend?'
Our embryonic peloton concurred
We'd supplement our journey with the word
The union of inches, gear and column
To save our voyage from becoming solemn
A paragraph accompanying each mile
The rhythm unrelenting, pulsatile
And best of all, annoying clicks and creaks
Would not be noticed while each rider speaks."

As the road takes this little group out of the City and down through Croydon, the individual riders take up their tales. The roadie opens by talking of his career-defining race ("An hour of speed and general delirium / The kind you'll only find in a criterium"):

"Establishing an incremental gap
With each prolonged excruciating lap
Ignoring data I don't need to know
I'll pay attention when it's five to go
Along the way I pick up every prime
Accruing cash and boosting self-esteem
I start to wonder if I'll lap the field
But this is where my hubris is revealed
No sooner have I had my grand illusion
Than suddenly I sense a rude intrusion
Cacophony of spokes and heavy breathing
The realization briefly has me seething
How could I let this interloper bridge?
Now stuck to my back wheel like mucilage
The minute five laps go up on the board
This vulture's staked his claim on my reward."

Once the roadie gets to the end of his tale - did he win? I'm not telling - the courier tells hers as the group rolls on through Purley, followed by the sportiviste as they tear on past Whyteleafe:

The tales Parker tells are, you can see, somewhat wry in the way they look at some of the riders. The Srampagmano Tales is a cycling book that puts a smile on your face. Not all are gently mocking: the fakenger's tale moves into outright derision of a breed of cyclist no one self-identifies with ("What pressure should I run to make me faster? / For white tyres: ivory, cream or alabaster? / How can I Pantone match this shade of blue? / I've bought a fixie, who knows what to do?").

Side by side with these sit gentler tales. The rouleur's, told as they roll on south from Bletchingly, is a love story with a nice twist in the tail. The randonneur's tale tells of night riding, in a voice that will be recognised by anyone who's gone from dusk to dawn. The tester's tale gets told with a metronomic beat and a repeated refrain about passing a marshal in the rain, style and substance merging into one.

Appropriately, the grimpeur gets to summit this wee pile of stories, with an existential tale as the group crest Ditchling Beacon and finally see the sea before them. The end of the road, and - save for a brief victory lap/epilogue - the end of the poem.