Eric Chouinard reviews Merckx 525, the third Merckx book to appear this year and by far the most visually stunning. 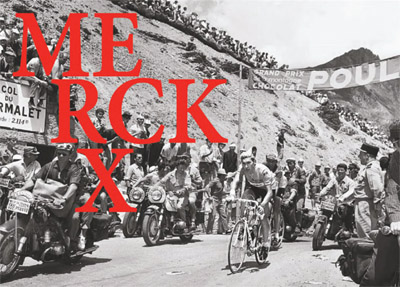 After the recent scandal involving Lance Armstrong that has dominated the cycling-related news as of late, I was relieved to pick up this picture-heavy 224 page coffee table book on the great Eddy Merckx - nicknamed "the cannibal" - and his astounding 525 career wins.

The book, cryptically titled Merckx 525, catalogues Merckx's career from his first race in 1961 to his last race in 1978 and provides a nice little summary for each year of his career. Interspersed throughout with text that provides an overview of the highlights of Merckx's career, the book features big splash pages of images that mark the career of one of the most revered figures in cycling. 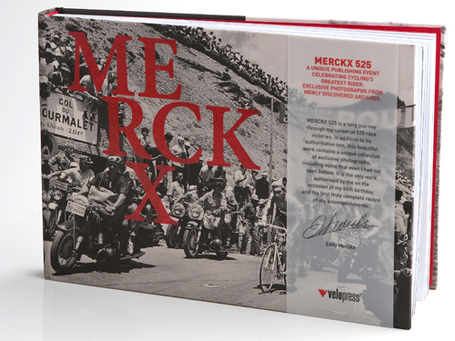 When you first set eyes on this monstrous tome the first thing you notice is the striking sepia-toned image of Merckx pedaling on the Tourmalet during the Tour de France in 1969 (featured again in black and white later in the book) next to big bright red letters spelling out his name in an artsy arrangement that is eye-catching. A removable partial white dust jack, that covers 1/4 of the cover, features a small message from Merckx talking about how this book is "the only work authorized by me on the occasion of my 65th birthday" and echoes a rather sentimental thank you note from Merckx to his fans that is in a foreword that opens the book.

It is clear from the beginning that this book is aimed squarely at cycling fans and it delivers some incredible images from various periods of Merckx's career. Each image is simply dripping in nostalgia with full-page photos (sometimes even two page spreads) interspersed with one to two pages of text that add some brief biographical context to the photos and help to situate the images. 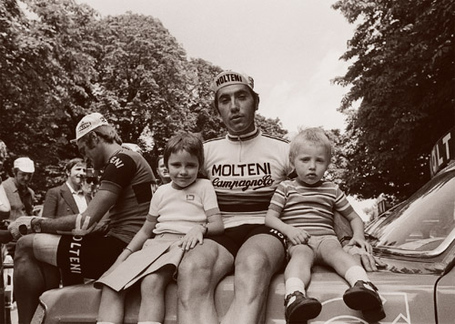 The only negative that I have is that the book starts off rather slowly showcasing Merckx in the early days and then jumps, rather strangely, into several images of Merckx and his wife. Some photographs are romantic and others are posed. One in particular features the Merckxs in their bathrobes in a hotel room enjoying some sort of marital bliss morning? Is this book trying to tell us that one of Merckx's greatest unlisted victories was marrying his wife? But I digress...

I found that the overall design aesthetic of the book was similar to Rouleur magazine layouts (this is not a bad thing) and one can spend a tremendous amount of time simply gazing through the moments captured in these pages or relish the amazing scenery that is eloquently captured in the cycling photography. Some other familiar faces are captured throughout the book such as Anquetil, Simpson, Maertens, Ocaña and many others. 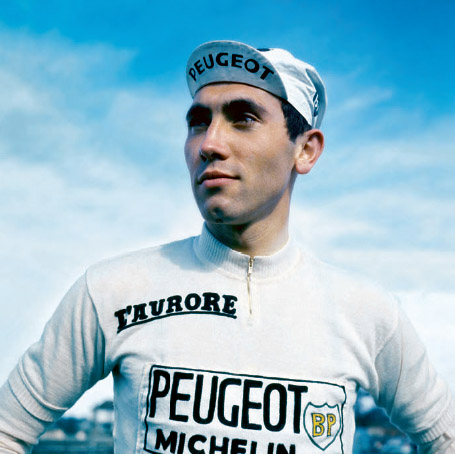 While the text explores Merckx's career in general, focusing on the most exciting moments, it doesn't hide the dark sides either and we follow his career through the highs and lows. One incident that sticks out is when his motorcycle pacesetter during a derny-paced exhibition race crashes, resulting in Merckx receiving a concussion and serious head wound, as well as the death of his motorcycle pacesetter. The book shows Merckx's career with the warts-and-all and two pages of images show Merckx unconscious by the side of the track and in an emergency vehicle. Besides showcasing Merckx's prowess during races it tries to hit all the major milestones, which includes the successful hour record attempt in 1972.

There are blemishes on Merckx's story though, such as the instances where Merckx was disqualified for having banned substances in his blood stream. Most of these incidents are described but easily explained away as strange flukes. For instance, when Merckx was found to have tested positive for Reactivin during the 1969 Giro d'Italia. The incident is pawned off as a mysterious act of sabotage:

"There are indeed many questions asked about the mysterious doping affair, and not just in Merckx's entourage. Even among the Italian press, there are some who suspect sabotage. No one makes the assumption that Merckx has doped himself. He has been tricked. And that is what he himself believes. ‘I know nothing. I am convinced that they tried to break me. Don't tell me anything about the Italians. They can't be trusted. I should never have come here. I've won too many times here. I was afraid something would go wrong sometime.' But what has gone wrong? Merckx denies that he would unwittingly have accepted a bidon - a water bottle - from an Italian fan. A priest from Parma declared on the radio how he saw Merckx's bottle for the 16th stage being removed from its holder and later put back."

I couldn't help but be a little skeptical of this incident because it reminded me of the same defense that Ben Johnson used in the Seoul Olympics in 1988, claiming that his positive test for anabolic steroids was due to sabotage. Johnson had surmised that someone, possibly the North Koreans, had sabotaged his water bottle. 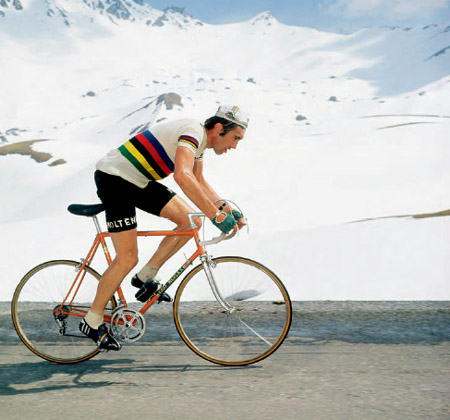 Again, another doping incident in 1973, at the Tour of Lombardy, forces Merckx to withdraw when traces of norephedrine are found in his system. For this incident, his doctor takes full responsibility since he had stupidly prescribed cough medicine to Merckx which contained the banned substance. While taken in today's context (as mentioned at the beginning of this review), these incidents started to sound a little familiar but I'm willing to give Merckx the benefit of the doubt.

This book provides a nice overview or intro into Merckx's career and I discovered a tremendous amount of information about the Cannibal that I didn't know beforehand and I'm still awed by his talent. He is a person who had an incredible talent and drive to succeed. Like all great racers though, his career began to unwind as he got older but this seems common to aging professional athletes at one point or another in the twilight of their careers. 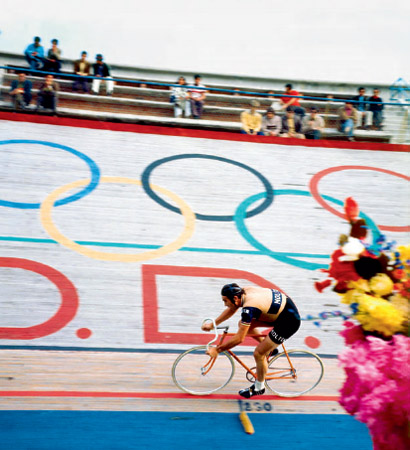 There's a moment in the book where one realizes how strong Merckx's talent was during his prime. Take this small remark by the author when Merckx wins the world championship for the second time:

"On the podium, [Cyrille] Guimard, and [Felice] Gimondi flank Merckx. Gimondi bows his head and shakes hands with the champion. What if Merckx had not been there? How much richer would the career of the stylish Italian have been?"

This quote reflects something very interesting about cycling and sports in general. Some sports figures are so skilled that they seem to completely dwarf other above-average athletes of their era. It is interesting to contemplate what could have been for many exceptional athletes that constantly came in second place to a consistently successful athlete. In the context of this book, some may perceive the quote as a kind of exaltation of Merckx - but hey, it's his book, celebrating his insanely successful career.

Overall, I really liked the book but a part of me would have enjoyed even more images (my common complaint with regard to these types of photograph-rich tomes). I'm slightly conflicted about the use of black and white images over colour (perhaps this is the original format? I don't know for sure) and would estimate that two thirds of this book features black and white photography. A part of me would have preferred to have more colour images but this is not necessarily a negative, just something that I kept wondering as I looked at each image absorbing as much detail as possible. 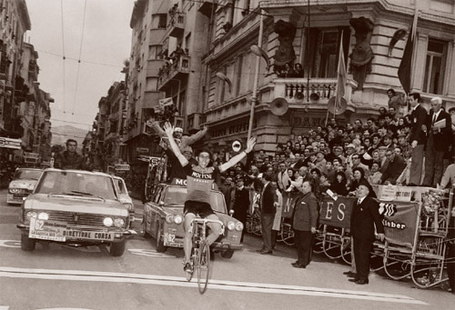 At this point, I have yet to read an in-depth biography on the Merckx (two were released this year) but I think that this book, coupled with recent viewings of A Sunday in Hell, The Greatest Show on Earth and Stars and Watercarriers and anecdotes in articles in cycling magazines, has provided me with a fairly keen understanding of who Eddy Merckx was as a cyclist.

As the holidays are approaching, this book would be a welcome addition to any cyclist's coffee table or weight-bearing bookshelf.