Laatste Ronde! A retrospective of the cross season that was

Share All sharing options for: Laatste Ronde! A retrospective of the cross season that was 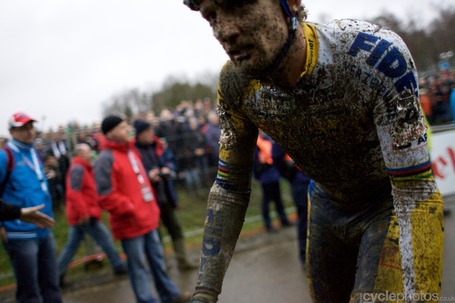 The location was Oostmalle, a small town of less than 7,000 residents in north eastern Belgium. The crowds gathered around the circuitous course had bittersweet expressions on their faces, excitement for the spectacle to come intertwined with sadness. Even the weather seemed sad, weeping rain as the day came to an end. Miraculously, the riders legs - which were visibly heavy with fatigue a mere 24 hours ago - thrashed at the pedals of their muddied steeds as they sought to empty every last drop of energy from their bodies.

The bell clanged loudly as the announcers clamored "Laatste ronde!" We craned our necks to see Albert's white kit, encircled with a mud-encrusted rainbow, round the last bend. His traverse down the finishing straight seemed to last forever, and as quickly as the world champion crossed the finish line, the race - the very last of the season - was over.

Yes, the cross season is over. We could lament that - or we could celebrate what it was. Come and remember the season with me - both its high points and the riders we won't see again.

Where do we start when we think back to the 2011-2012 cross season? As with any conversation, it's polite to say hello to the newcomers first. First, let us say hello to Kevin Pauwels. No stranger to the upper tier of the sport, Pauwels nonetheless surprised many when he hit the beginning of the season like a maelstrom and rarely slowed down. Performing especially well on the fast courses that characterize the first part of the cross season, Kevin finished his season by winning not only his first major classification but two! 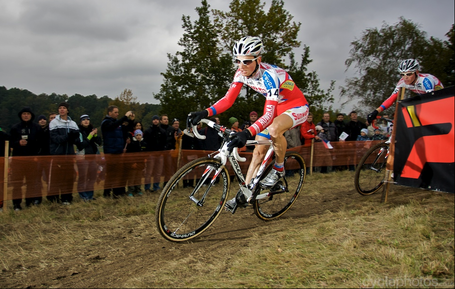 While Jeremy Powers was no stranger to the top level of cross racing in the United States, he finally rid himself of the Curse of the National Championships this year. He emerged as arguably the preeminent American cross rider this year, especially since he not only donned the Stars and Bars but also garnered the highest international placing of a domestic cross racer with his 10th place at Plzen in the Czech Republic. Plus, who can forget all those wonderful episodes of Behind the Barriers?

Also, Ryan Trebon re-emerged from several years in the wilderness to lay claim to the title of one of the best cross racers this side of the Atlantic. No, Ryan didn't win the national championships... But he did win two rounds of the USGP and missed out at three potential USGP victories only because of a knee injury. When he returned to racing, he won both days of the UCI New Years Resolution races in Chicago before finishing second at the national championships and being the top American finisher at Worlds. Ryan, we are so glad you're back.

No discussion of a cyclocross season in recent would be complete without the discussion of two individuals: Sven Nys and Marianne Vos. Sven seemed to be waning with respect to his usual domination this year. When you consider the fact that most people would agree with this even though Nys won one of the three major series - the Superprestige series - you realize just how much of an idol Sven has become. Though he failed in his bid to win another world championship and muttered after the race it might be his last attempt at single-day glory, Sven will always hold a place in our hearts. Plus, word on the street is he wants at least one more Superprestige title to put on his overstuffed mantled to make Mrs. Nys proud... 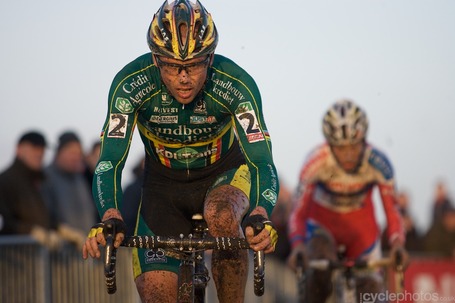 Displaying an even more ferocious form of domination was Marianne Vos, who lost few races indeed once she started racing. Really, this girl is like a terminator in a skinsuit! As you must know by know, she took home the World Championship for the fourth time in a row and fifth time total. Damn, girl. She also won over 15 races in a row, so fans saw a lot of this... 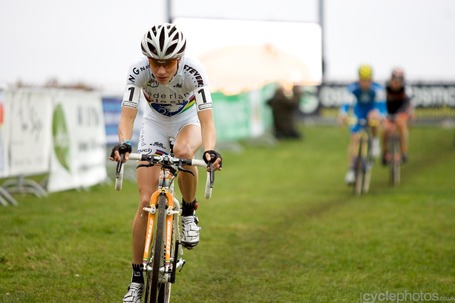 But! Let us not forget the travails of sir Niels Albert, who overcame some broken bones in his hand to win the world championships in Koksijde. The boy has a sand dune named after him now, which is quite literally a big deal. And who could forget the way in which Belgium dominated the Men's race, putting every single one of their team members in front of the rest of the World?? We used to think of US Postal when we heard the phrase "the blue train", but now many of us will think of cyclocross instead...

The season ended, however, on a bittersweet note, as most do. Every season, we must learn to say goodbye to several of those racers who have animated the races for years. This year, we had to bid afscheid to Daphny Van Den Brand. A world champion in 2003, Daphny and her pigtails were the winningest rider on the circuit behind Marianne Vos. Let us not forget, too, that Daphny was the only rider to best Vos - twice! - at the Koksijde World Cup and Oostmalle. So long Daphny we shall miss you greatly. 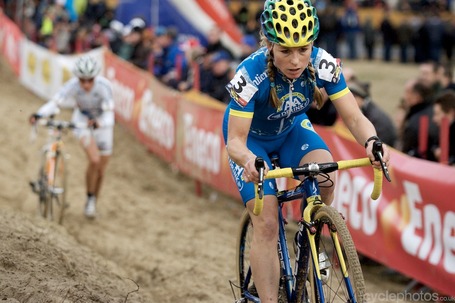 We also said a bittersweet goodbye of sorts to Zdeneck Stybar, who will be focusing mostly on his road season next year and only using a few cross races as training. Really, we already lost Lars Boom to the road scene - do we have to lose Styby too? The defending world champion had a rougher season than we are used to, seemingly struggling to find his form after a year full of road commitments with the Pro Team QuickStep. Fortunately, Stybar found some form at the end of the season, winning the Lievin round of the World Cup and the final Superprestige race at Middelkerke. 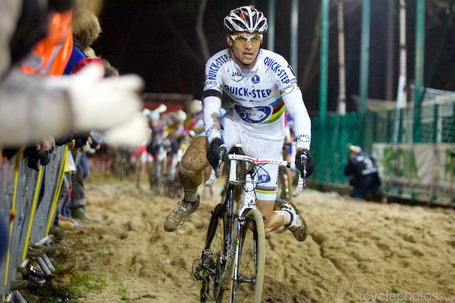 Don't expect Stybar to disappear completely though - he did finish 3rd overall at the Four Days of Dunkerque this summer... Methinks that talent will appear again.

And let us not forget the scare we had when we thought Bart Wellens might leave us too early. Fortunately, he recovered and was providing lively commentary (I couldn't quite understand the Flemish... but it sounded good!) during the last race of the Superprestige series in Hoogstraten.

So, let us take a moment to savor the cross season that was. The cobbles will arrive on Saturday, your VDS teams will take finalizing between now and the end of the week. But join me in looking wistfully back at the past five months and forward to next September.

All photos not attributed above provided by Balint Hamvas at cyclephotos.uk . Check out the site, seriously. Plus? GS is working with Balint on a BOOK! All mis-translated phrases are my responsibility alone.