Share All sharing options for: The Six Day Bicycle Races, by Peter Nye 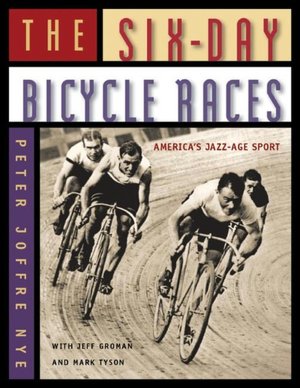 Title: The Six Day Bike Races - America's Jazz-Age Sport
Author: Peter Nye, with Jeff Groman & Mark Tyson
Publisher: Van der Plas Publications / Cycle Publishing
Year: 2006
Pages: 224
Order: Cycle Publishing
What it is: A brief history of the world of American Six Day races
Strengths: A good solid overview of the American history of Sixes, establishing the stars of the day and showing just how popular cycling was in America at the time. Richly illustrated it shows as much as it tells just how spectacular Six Day cycling was in the US back then.
Weaknesses: It is what it is: an introduction to the world of America's Six Day racing scene. This really is an aspect of cycling history crying out for a more in-depth telling.

Six Day racing started in the 1870s, with the Islington Hall in London usually getting the credit as its ground zero (though some claim Sixes actually started in Birmingham). In 1879 a vaudeville promoter, Jack Haverly, brought the likes of Charles Terront, Billie Cann and Harry Etherington across the Atlantic to show off their skills on high wheelers in roller-skating rinks in Chicago and Boston. Eight years later Tom Eck imported the concept of all day and all night racing, Monday through Saturday and from there the Sixes took off (that's what the history books say anyway: results from at least four Sixes - three in Minneapolis, one in St Paul - can be found from the year before).

It was with the establishment of the Madison Square Garden International Six Day races that the sport really came alive in the US. It was Eck again who promoted the first Garden Six, in 1891. Bill 'Plugger' Martin stayed on his high wheeler for 2,315 kilometres. Eight thousand people at a time could come and see Plugger and the others rolling around the Garden's wooden oval, ten laps to the mile, hour after hour, six days straight, midnight on the Sunday through to ten pm on the following Saturday. For his efforts Martin took home a prize of $2,000: a sizeable sum in an age when the average worker could expect to earn about $500 in a year.

In 1899 New York's legislators passed a new health ordinance, banning riders from being on the boards for more than twelve hours in a day. The sport needed taming: riders were collapsing with exhaustion and hallucinating. That they were staying awake on all sorts of stimulants doesn't seem to have been the problem for the legislators, nothing was done to diminish their use. Some promoters responded to the changing times by organising Sixes in which the riders rode two five hour sessions a day, one in the afternoon, one in the evening, similar to the way Sixes are run nowadays. But Bill Brady - a Broadway promoter who also managed a couple of champion boxers - came up with the idea of putting the riders on the boards in teams of two. Thus was born the Madison.

Why were Six Day races as popular as they were? This little bit from the New York Daily News's Paul Gallico might help explain the attraction:

"And this marrrrrrvelous contest of skill, endurance, strength, ignorance, speed and stamina is yours to view for a trifling sum laid down at the box office, a few coins of the realm, ladeeeeeez and gen'lemen. See the athletes eat fourteen meals a day. See the man fall off his wheel and tear his pants."

Another reason for Six Day cycling's popularity was the simple fact that cycling itself was massively popular. By the end of the nineteenth century America boasted five different cycling weeklies; more than 300 American companies were manufacturing bikes; most every major city had at least one track. The League of American Wheelmen - the sport's governing body in the US at the time - could boast membership of 100,000, across every strata of society, all the way up to the likes of Lillian Russell, Frederic Remington and John D Rockerfeller.

Cycling in those early days of its history was a global sport. Riders like Alf Goullet and Reggie MacNamara made their way from Australia and carved out careers in the US and Europe. Australia itself had a cycling circuit - the story of which really needs to be told - and American riders in particular accepted invitations to race there. The to-and-fro with Europe was also strong. An ocean liner could cross the Atlantic in about six or seven days and American and European rders criss-crossed the Atlantic. Americans came to Europe to accept lucrative offers to appear on tracks, especially in France and Germany. European riders went to the US.

Jimmy Michael, the Welsh star, made a small fortune there. As did Albert Champion, the French star who won Paris-Roubaix in 1899 (back when Paris-Roubaix was just a warm-up for Bordeaux-Paris, and both races were motor-paced). Stars of the Tour de France and the Giro d'Italia also went to the States to ride Sixes, Lucien Petit-Breton to Alfredo Binda.

The international aspect of the sport was also part of the appeal of the Sixes. After the two-man format was introduced, at the turn of the century, riders competed in teams usually given national or regional identities. At the 1902 Madison Square Garden International Six Day race the teams were All American, Alsace, Belgium, Boston, California, Chicago, France-Germany, Germany, Ireland, Jersey, Massachusetts, New England, Quaker and Western. Even the punters who weren't die-hard cycling fans - and so knew who was who on the boards - had skin in the game and could cheer for their hometown hero.

In the twenties, baseball took a wobble on the back of the Black Sox scandal and the Sixes reaped the reward. Their popularity surged. A whole circuit of Sixes existed. Having traversed the country in the Sping and Summer, riders took to the Six Day circuit for November and December, travelling from race to race: Atlanta, Boston, Buffalo, Chicago, Des Moines, Indianapolis, Los Angeles, Minneapolis, San Francisco, St Louis, Toronto, these were just some of the cities that boasted with pride of their Winter Sixes. By 1919 Sixes were so popular that Madison Square Garden was organising two a year, one in March, one in December, top and tailing the American cycling season in the same way Milan-Sanremo and the Giro di Lombardia top and tail the European cycling season.

Six Day cycling was a business and quite a profitable one at that. It was as much vaudeville theatre as sport. In 1935 Fortune magazine reckoned that the Sixes were the Garden's chief profit-maker, grossing around $250,000 over the course of a week. Fortune even livened up their usually gray prose and waxed lyrical on the sport:

"The smoky heat of the arena, the figurations of untidy hot-dog stands, flag-decked, the now drowsing, now screaming spectators, the throbbing incandescence of jazz bands and gongs blended with the drone of humming tyres, combine to create the strange, dreamlike, and individual overtone that is the soul of the Six-Days."

James Thurber wrote about Sixes in the New Yorker. Damon Runyon covered the Sixes for The New York American. During the December 1921 Six, when Alf Goullet was having a hard time of it but still rising to the occasion, Runyon had this to report:

"Tier on tier the yell-tossed crates of humanity hung over the rim of the pine saucer in Madison Square Garden, their shrieks seeming to blow the riders onward like a gale, voices and emotions pitched to the cry, 'Long live the King!' Then out of the tobacco fog came ol' Al Goullet, the King that was to die. Out of the mist of defeat he came, nine feet high to the strained imagination of the other riders, and growing taller every minute. On he came, the Man o' War of the wooden loop."

The Roaring Twenties ended on October 29, 1929, with the collapse of Wall Street. Cut backs were necessary but even so, the Sixes were still popular and the Garden was still able to pull in 100,000 paying punters over the duration of a race. Then, in 1933, came the 21st Amendment: prohibition was repealed. In the years that followed, cycling slowly lost its popularity and quetly slipped out of the public consciousness until its revival in the eighties.

Much of The Six Day Bicycle Races is based on the work Peter Nye did for his earlier Hearts of Lions, which did so much to rescue to the history of American cycling for a generation just discovering its European history through the exploits of Jock Boyer, Connie Carpenter, Greg LeMond, Marianne Martin and the 7-Eleven team. As with many of the books detailing the history of the Tour de France, some of Nye's facts can be called into question, but that shouldn't detract from the book: this is an overview, big picture approach to the story, establishing the stars and the era. As new books emerge looking in detail at the story of individual stars - Andrew Ritche's Major Taylor, Andrew Homan's Life in the Slipstream and even, to an extent, Sue Macy's The Wheels of Change - those kinks are getting ironed out.

As well as over-viewing the Six Day scene, Nye offers brief pen picture of some of the men of that era who were stars in American: Bobby Walthour, Alf Goullet, Floyd MacFarland, Reggie McNamara, Bobby Walthour Jnr, Jimmy Walthour Jnr, Herry Mendel, Gustave Kilian, Henze Vopel and a few more. And it is through these stories in particular that the American, European and Australian histories of cycling unite, The Six-Day Bicycle Races following some of the stars to Europe and Australia and telling of their exploits there.

On one level, you could just look at The Six-Day Bicycle Races and say it's an American book for an American audience, of no real interest to anyone else. This would miss the point. The Sixes were fundamental to the birth of the Tour de France: the first Tour was proposed as a Six Day race put on the roads of France. Time and again Henri Desgrange took ideas that worked in the Sixes and used them to enliven the Tour. As well as the national and regional teams format the Tour took mid-stage sprint prizes from the Sixes, where they were used to make the riders mix it up when all they wanted to do was roll round and round and round the track.

The two sides of cycling - road and track - cross-fertilised one and other. The roots of cycling's doping problem are strongest in the old Sixes. As with Choppy Warburton before him Jack Neville made a show of passing up little black bottles to his riders: whatever was in the bottles is lost in time but, often, their effect of the opposition was to make them think they were already beaten. Cycling is a psychological game. But doping was prevalent in the Sixes. That doesn't mean that all riders doped all the time. Some riders carved out long careers, which suggests they were more than likely clean. Others flashed across the sport like meteorites, quickly burning themselves out.

Track cycling, while somewhat side-lined these days, is still immensely popular, particularly today with Team GB the power-house they are and rival nations like Australia rising to the challenge and threatening to spoil their party. Books like Nye's The Six Day Bicycle Races help establish the early history of this side of our sport. But - and, for me, more importantly - they also help shine a fresh light on the early years of road racing, by rounding out the pcture of the world road racing grew up in. For that reason, books like this really hsould be read by all curious about the history of our sport.