If you didn't already know about the race coming on Saturday, I cast thee out! I am here to help. You see, we here at the Podium Cafe are, how should I put it... fond of the cobbled classics. It's not a rule, and a few of you heretics have freely dissented, but in case you care to take part in the celebration of the classics kickoff, join us on the flip for some basic facts and a few offhand morsels of analysis.

The course isn't meaningfully changed from last year. The Valkenberg has been added, bumping the number of climbs to double digits, but nothing of consequence has been dropped. As far as I can tell, they managed to shorten the race by 3km and add in an extra climb by cutting out a bit of the preamble. Anyway, all of this will transpire before the cameras come on. Deets here (click on image to embiggen): 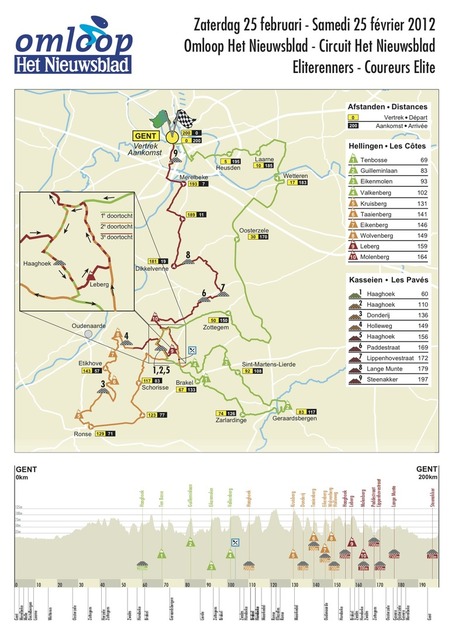 Here's what I see as unique in this race:

Fitness is an issue for almost everyone now. Nobody who plans to peak for the bigger prizes can say he's on top form in late February. But someone has to win, and winners come in two shapes: guys who prioritize a shot at an early win, and guys who can win on their February half-form.

In the latter case, well, someone has to win, and if nobody steps up, the guy who can nail the bunch sprint gets the honors. Like Thor Hushovd in 2009. Over the years plenty of stars have managed to pour a short draught of awesome and take home the prize. For nearly a decade leading up to the 2004 snow-out the winners were hall of fame timbre: Ballerini, Steels, Van Petegem, VDB, Bartoli and Museeuw.

More recently we've seen efforts of strong form, guys who maybe had something to prove. Pozzato in 2007, his first year beyond his Quick Step apprenticeship; Flecha and Langeveld the last two years, then-unproven Gilbert in 2006 and Nuyens the year before.

The climbs will may get the headlines here but I don't see why they will do more to determine the outcome of the race than the flat cobble sectors. The Taaienberg, Molenberg, Eikenberg etc. are all respectable climbs, but they are few and short enough not to hurt these guys excessively, and all far from the finish. At most, the last trip up the Leberg and/or Molenberg, if done at top speed, will shake things up. But look at the numbers for the flat cobbled stretches:

I know those stretches of road don't hurt the stars anywhere near as much as they hurt guys like me, but surely they will take a toll.

Startlist here. Langeveld gets the #1 dossard for his GreenEdge team's cobbles debut. Radioshack-Nissan-Trek (and Cancellara), Saxo Bank and Liquigas are among the prominent no-shows. Some teams really do regard late February as too early. Weather reports are partly cloudy and cool, with no moisture around. The cobbles will still be slippery in places when those skinny wheels start kicking up mud, but for the most part it won't be a messy day.