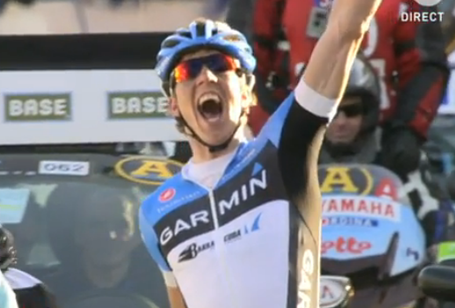 Sep Vanmarcke from Garmin-Barracuda opened his account for the season -- and maybe for the start of a dramatic career turn -- with a clinical victory at the Omloop Het Nieuwsblad in Gent, Belgium today. The 23-year-old from East Flanders used brilliant reactions and even better legs in making all the race's best moves, even beating Flemish legend Tom Boonen of Omega Pharma Quick Step and Omloop stud Juan Antonio Flecha of Sky in a three-man finale.

The action started on the Taaienberg -- Boonen's Berg -- with Boonen himself initiating the action, almost out of habit. But on his right hip Lars Boom of Rabobank went off the road and flipped, disrupting the lead group to the point where only a few riders could catch up. They were Vanmarcke, Thor Hushovd, Juan Antonio Flecha, Matti Breschel, Dries Devenyns and Matt Hayman. This elite group diminished the appetite of the chasing peloton, and they quickly built a minute lead as they closed in on two early breakaway riders. The Paddestraat cobblestones then extracted a toll, as Breschel and Hushovd couldn't stay with the leaders, putting BMC in charge of the peloton chase, but it was too late.

On the Lange Munte, Vanmarcke made a brilliant attack. In a five-man group with two star riders and their domestiques, Vanmarcke unleashed a furious acceleration which shed the two helpers Hayman and Devenyns, putting the young Garmin ace on level terms (and eliminating Sky's sprinter).

Flecha's expected attack took place on the Steenakker cobbles, 3km from the finish, but went nowhere. Vanmarcke himself tried an attack inside 2km, halfheartedly, but then settled in on Boonen's wheel. Boonen opened up the sprint, coming around a thoroughly beaten Flecha, and Boonen settled into his winning pathway, but Vanmarcke was just too strong and smart. He came around Boonen with maybe 50 meters to go and outdistanced him by more than a bike length for a brilliant win which will send a message across the cycling landscape. A new Belgian classics prodigy has arrived.