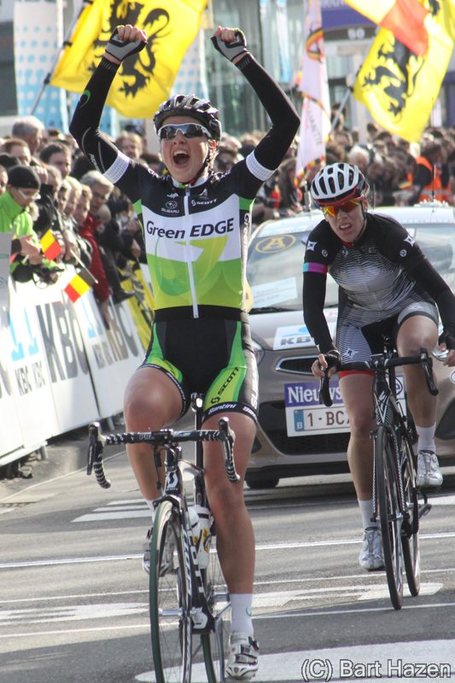 So far, Greenedge-AIS have been dominating the beginning of the road season, with a series of magnificent (if maybe not unsurprising) wins in the Australian races, and Judith Arndt's win at the Tour of Qatar, but today they proved that they can win on three continents, when the women's Omloop came down to two Dutch riders - the superb sprinting skills of Ellen van Dijk against Loes Gunnewijk's Classics tactical genius.

OK, OK, the headline and the photo give away the result, but follow me below the jump for more on how the race panned out - and check the comments in case we find a link to video, and more!

EDIT! Sporza have a minute of video of the sprint, a tiny post-race interview with Gunnewijk, and the sprint for third - click over & show them we appreciate that! Thanks gs for finding it!

Photo copyright and used with the very kind permission of Bart Hazen of the Daily Peloton - thankyou very much, Bart!

The women's parcours was 119.5km, with seven climbs, including the Kluisberg, Côte de Trieu, Paterberg, Edelareberg, Wolvenberg and Molenberg. It was always going to be a hard race, with the fresh legs of the peloton relishing the cobbles, climbs and atmosphere of the European season opener - and with the big changes in the women's peloton that traditionally accompany an Olympic year, lots to prove.

When the race hit the Paterberg, Elisa Longo Borghini of Hitec-Mistral was the first to top the climb, leading a group of ten or so riders, with a strong group of 12, including Loes Gunnewijk, chasing at 90 seconds behind them. From here onwards, the front of the race was full of attacks, escapes and regroupings. Noemi Cantele, racing for her brand-new team, Be:Pink, was especially aggressive, but couldn't make it away from the front group of 12 which had formed at the half-way point of the Côte de Trieu - Cantele; Gunnewijk, Tiffany Cromwell & Amanda Spratt of GreenEdge-AIS; Longo Borghini & Lise Nøstvold of Hitec-Mistral; Van Dijk & Trixi Worrack of Specialized-lululemon; Martine Bras (Dolmans-Boels); Pauline Ferrand-Prévot (Rabobank); and Lizzie Armitstead (AA Drink-Leontien.nl). Behind them on the road, the race was all small groups, and the group had its share of drama, with Armitstead crashing, and having to chase back with Van Dijk, as well as the usual women's-style attacking at every possible opportunity.

The attacks continued, but none could stick, until at about 20-30km to go, Gunnewijk attacked on the long cobbled stretch of the Paddestraat. Once the cobbles were over, Van Dijk was able the only one able to bridge across to her, and the two Dutchwomen worked together, to make this attack permanent, with their team-mates behind them to disrupt the chase. At 12km to go, the pair had 1:36 on the group, and the race was set up for an exciting duel - Van Dijk the better sprinter, but Gunnewijk a rouleur with some of the best tactical skills out there, looking for her opportunity to escape.

In the end, it was Gunnewijk's attack that won the day, and Van Dijk's team-mate Trixi Worrack completing the podium, winning the sprint for third from the chase group home (and another teammate, Chloe Hosking, sprinting to lead the next group home). It was a tough race, with only 36 out of the 97 riders who finished making it in within the 5% timecut - and, just like the men's race, a great opener to the Classics season.

Probably my favourite thing about the results is seeing the resurgence of some of my favourite riders, and the way the new, reformed, and existing teams are shaping up. Cantele, Worrack and Cromwell are three of the riders who seem to be benefiting from their new teams - and much as I enjoyed Gunnewijk working for Marianne Vos at Nederland Bloeit, and Cantele working for everyone at Garmin-Cervélo, I'm excited to see them in teams where they get to ride for themselves 100%. Ferrand-Prévot will be leaving the road for Mountain Bike as we near the Olympics, but I'm really happy we get to see her on the cobbles for the start of the season - and it's good to see Martine Bras, who told us last year that this might be her last season racing, starting her 26th year racing in fine form!

To see more about the race, check out the photo galleries from Bart Hazen at the Daily Peloton, and soon from CJ Farquharson at WomensCycling.net - and as usual, I'm sure people will be adding any interesting articles, blogs and videos to the comments.... but I'll leave you with this great tweet from Chloe Hosking, about the Swedish perspective of the race....

@EmiliaFahlin "Why can't they just pave the roads? What's the problem?" #quoteoftheday

Poor Emilia, there'll be a lot more of that in the months to come!