Share All sharing options for: Cavendish Delivers in Kuurne

Mark Cavendish's first classic in the rainbow jersey ended in a clinical victory in Kuurne-Brussels-Kuurne today. Cavendish was led home by his new train, featuring guys like Matt Hayman, Juan Antonio Flecha, and Bernhard Eisel, and they got their man where he needed to be. The final sprint, held on a wide boulevard in Kuurne, was a messy bunch, and rivals like Andre Greipel of Lotto and Tyler Farrar of Garmin got completely swamped by bodies. Only Yahueni Hutarovich of FDJ could emerge from the chaos and challenge Cav, but it was never in doubt. 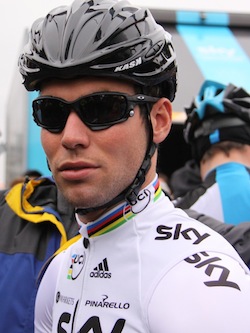 This race, held on a pleasant day in east Flanders, was always going to be a bunch sprint. Sky held court on the front of the peloton for virtually the entire (televised portion of the) race. A breakaway featuring French champion Sylvain Chavanel was given some leeway in the final segment of the day, and a few fliers were taken in the closing km, but Sky were not letting anything slip through their fingers, even employing aerodynamic helmets (in several cases) to make their intentions clear. Cavendish hugged his teammates one by one at the end, thanking them for their work, and the feelings were undoubtedly mutual. Results: