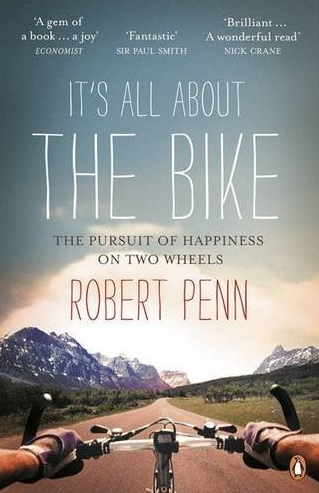 Robert Penn's It's All About The Bike is the story of one man's quest to build the ultimate bicycle, wrapped around a potted history of the bike. Penn popped into the Café recently for a quick chat.

Podium Café: I'm quite drawn to the myths of our sport. All the half-truths told to big-up the giants of the road and the like. A myth that I'm getting more and more drawn to is that of the humble bicycle. The more I read the more I form the view that the bike is like one of those people who claims to be modest, and then adds that they have much to be modest about. What's your take on that - is the bike a bit of a braggart?

Robert Penn: I think it depends on what style of bicycle we're talking about. The majority of the two billion or so bicycles on the planet are utilitarian roadsters: there's no braggadocio about them. The road bike, however, is a different matter. It has to race, and win, to justify its existence. There's little room for being humble in those circumstances.

PdC: One claim regularly made about the bicycle is that it is environmentally friendly. But the process of building bikes - mass production more so than the artisan frame builders you talk about in the book, but even with them there is an environmental cost often overlooked - can actually be quite damaging to the environment. Do you think that maybe it's time cyclists stopped being so smug and put their own house in order?

RP: I think that smugness is, thankfully, declining. A lot of the folk new to cycling aren't counting the environmental cost. They're riding for other reasons - it makes them feel good, it's healthy, it's more fun than golf. There is an environmental cost to everything: even organic Fairtrade coffee comes at a price. So cycling is environmentally friendly only relative to other modes of popular transport. Should we as consumers encourage the bicycle industry to be more aware of the environmental cost of manufacturing bikes, parts and accessories? Undoubtedly. For starters, I'd like to see consumers identifying bikes and components that are built to last.

PdC: The early history of the bicycle is a contentious area. The British and the French manage to wind one and other up with claim and counter claim over who got there first. The Germans get chippy about their role being overlooked. And the Italians just smile smugly, believing Leonardo got there first. Sometimes it's fun to just sit back and watch the argument rage. But if you had to pick one single development, one thing that makes the bicycle a bicycle, what would you pick?

RP: You can't really pick one thing, but if you pressed me on the what is the most important development in the history of the bicycle, I'd choose the diamond shaped frame, ‘invented' by John Kemp Starley in Coventry in 1885. Actually, he probably didn't invent it - ideas of this grandeur are generally in the ether in several places simultaneously - but he manufactured the first ‘safety' bicycle and changed the way we ride forever.

PdC: I'm Irish and I think our only real contribution to cycling is Flann O'Brian's mollycule theory. Given that you sat your arse on a bike for 40,000 kms in one three-year period as you cycled the globe, how much of a bicycle do you reckon you are at this stage?

RP: 12%, and increasing slowly each year.

PdC: Something I remember reading once - it was on the internet, so it must be true - was that that just about all the innovations in bicycle design introduced in the eighties had actually been patented in the Victorian era. Clipless pedals and disc wheels - been there, done that, here's the patent to prove it. Is that what makes the bike so much fun - that there's a limit to its variety, no matter how much the bicycle industry tries to convince us otherwise?

RP: The first great golden age of the bicycle was the 1890s: in that decade, one third of all patents regsitered in the USA were bicycle related. In fact, the bicycle had its own patent office in Washington DC. In France, Italy, Germany, Great Britain and yet more countries the situation was roughly the same. Sure, every innovation in bicycle design you hear about today was originally invented by the Victorians. I think the bicycle manufacturing industry does a remarkable job at convincing us otherwise.

PdC: You clearly appreciate racing, tales from it pepper the book. But at the same time, you say that the racing side of our sport is at the centre of a conspiracy to get us to buy bikes totally unsuited to our needs. Being a fan of racing, and having some understanding the role bike manufacturers have played in the sport, why we fall for this is something I don't quite understand. In races, bikes are always breaking down and being replaced. Yet it's the bikes of champion racers we seem to want to ride. What's wrong with us?

RP: That's a big question. I'm afraid you'll have to peer deep into the psyche of mankind to answer this. Why did the Greeks worship Achilles?

PdC: You're a fan of steel tubing. I think I still have the Reynolds 531 decals from the first Roberts I bought (it was too beautiful to clutter up with decals). Which, reading your book, I now learn means I was riding steel. You're not big into aluminium and titanium and carbon?

RP: I do have aluminium and carbon bikes in my shed. I sold my titanium bike a few years ago and I regret it. But give me a choice and I'll choose steel every time. It rides well. It's relatively inexpensive, light, strong and can be fixed by a man with blow torch and a welding rod anywhere in the world. Steel bikes stick around for a long time too.

PdC: If you talk long enough about bikes you inevitably end up talking Italian. It usually takes no longer than three minutes, in my experience. Names like Pinarello, Cinelli, Colnago, Bianchi, Campagnolo, they just trip off the tongue. You feel cool just saying them. As cool as Hetchin's lug-work is, the name just doesn't conjure up sexiness. It really needs that extra vowel at the end. When you got your mits on the box of Campy gear for your new bike, you described it as like "being given a box of jewellery for Christmas." I'm guessing only a little bit more expensive. What is it do you think that makes Italians so good at this?

RP: Much of life is beautiful in Italy, and the bicycle is the beautiful machine. As soon as the country turned its artful eye to the bicycle in the middle of the twentieth century, it was apparent that the Italians would bring an elegance and spirit to it that the British and Americans had failed to supply. God bless them for it.

PdC: The British and bicycles. An unusual relationship, to say the least. Racing only happens on tracks. Motorists and cyclists seem to be constantly waging a low intensity war with one and other. You note that, when you were a lawyer in London, you were considered an oddity in that you cycled to work. Today, you've got a cycling Prime Minister. London has a cycling Mayor and a popular velib' scheme. Cycling in the UK is now cool, almost as cool as BritArt was in the days of Cool Britannia. Do you reckon it'll be a lasting change this time?

RP: Bicycles are currently fashionable. That won't last but it's indicative of how health concerns, transport issues, the environment and the price of oil are driving the bicycle back to the centre of public consciousness again. We're probably at the dawn of a new golden age, certainly in terms of bikes for urban transportation. I feel certain that a lot of western cities will have re-integrated the bicycle into their transport infrastructure by 2050. It's rolling out in other ways too: people increasingly want to go on holiday by bicycle, which I why I've started a wee business organising trips - www.bikecation.co.uk. The popularity and success of the bicycle has ebbed and flowed over the last century and a quarter, and it will continue to do so, but yes - I think there'll be lasting change this time.

PdC: How did you convince your wife to let you get away this whole thing, all the money spent on the bike, and all the travelling to find little bits and bobs for it? A very big box of chocolates?

RP: No - and this is a tip which I don't give away lightly - I make a complete pain in the arse of myself when I'm at home. Then when I head off somewhere, my wife is delighted to see the back of me.

PdC: The documentary based on the book, Ride Of My Life: The Story Of The Bicycle. Did that happen after you'd written the book, meaning you had to retrace your steps, or were the two happening together?

RP: Fortunately, the two happenned together.

PdC: Most authors get to the end of a book and all they've got is, well, a book, and dreams of a never-ending stream of royalty cheques. You got to the end of It's All About The Bike with not just the book and the dreams, but also a bicycle. How's that little baby working out?

RP: Very well, thanks. It's as beautiful bike. I've clocked 5,000 or so miles on it now. I'm thinking about replacing the carbon fork with a Reynolds 953 steel fork, otherwise it's unchanged. Riding it gives me great pleasure.

You can find him online at robpenn.net and on Twitter @LateralTruth

You can find a review of It's All About The Bike on the Café Bookshelf.

Our thanks to Robert Penn for taking part in this interview.