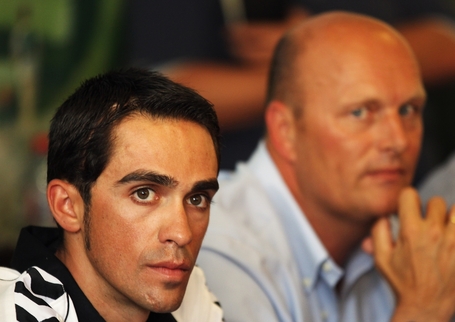 Today's decision by the Court for Arbitration in Sport to suspend Spanish grand tour ace Alberto Contador for two years (backdated to the 2010 Tour de France from which the violation arose) has officially thrown Team Saxo Sungard into licensing chaos. So far the information consists of a cryptic gnome-translated quote at Sporza by a UCI official who says that the Licensing Commission will look into the matter, and that if you subtract Contador's share (68%) of the team's points cited in support of its 2012 license, they don't meet the criteria for the World Tour.

This creates the bizarre spectacle of a team getting booted from the top level of competition while it is already underway for failing to predict the outcome of a proceeding that has taken two reversals of fate and more than 500 days to complete. Let's just lay out the pros and cons, and I'll leave it to you guys (and the UCI) (shudders) to determine what's right.

Pros: Contador's points for the last two years have been deducted from him, and the world Tour formula calculates the sporting eligibility criterion by adding the team's riders' individual points from the last two years to the team's collective points from the previous year to determine their score for this year's license. With Contador's points, Saxo-Sungard are a shoo-in; without them, they're apparently a shoo-out. Rules are rules, and making exceptions is inviting disaster.

[The big "if" here is, if the UCI has a clause that allows them to rescind licenses after making the offer. IOW, Saxo-Sungard qualified at the time they made the decision. Do they have to stay qualified until the day the license expires? Or is it like a nightclub, where once you get past the bouncers it doesn't matter how old you really are?]

As for the team, it brought in Contador about a month before the announcement that he had tested positive during the 2010 Tour de France. In that sense they can't be held responsible but they stuck with him throughout the proceedings rather than exercise any out clauses available. They happily gobbled up those UCI points despite the cloud hanging over Contador, and something like 99.9% of the reason for their loyalty had to do with the fact that it was Contador, the surest point-scoring bet on the planet.

The rules clearly punish teams for standing behind riders whose relationship to doping is uncertain. In other words, the rules really discourage having anything to do with doping. That's good, right?

Cons: The drama of seeing a rider of Contador's stature results in an extreme example, where a single deduction can flip the entire team's application. Compare to, say, Vacansoleil hiring Zeke Mosquera, who brought little to the team besides a second place in the Vuelta (nothing to sneeze at, of course), and whose exclusion didn't threaten the entire squad's existence. Surely Bjarne Riis, in assembling the squad, built enough around Contador to know where his points came from, and so he walked out on that ledge, hand in hand with his new captain.

But what else is one to do? Particularly once the Spanish Federation cleared Contador, he was free to ride. Even the Tour de France agreed with that assessment. Should Riis have looked for a contractual exit despite the apparent exoneration of the generation's greatest talent? Should he presume guilt even in the face of a finding of innocence?

Moreover, should Riis put his team's license in jeopardy, risking the loss of yet another major sponsor from the sport, at a time when cycling needs all it can get, because he took the word of every official organization in the sport last spring?

Next: we wait. Any change to Saxo-Sungard's license would result in a lot of plans changing. As the home of Nick Nuyens, their spring invites would go unchanged if they were bumped down to Pro-Continental (presumably they can't land any lower with their remaining 32% of past points). Their grand tour invites would be completely up for grabs, but they would remain eligible. I suppose each race which hasn't already issued its decision on invites would be free to put one more spot up for grabs, and ask Saxo to apply. For those like the Giro which has made its announcements already, I doubt there is a clear answer right now on how they proceed.