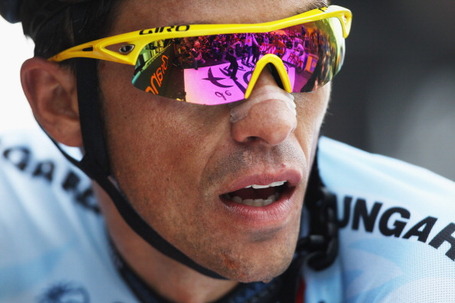 Alberto Contador and Saxo Bank team owner Bjarne Riis met the press today to discuss the arbitration court decision in Contador's 2010 Tour de France doping case. Contador's contract with the team ends with his suspension, but Riis signaled that he would like Contador to return to the team. Contador maintained his innocence, and criticized the system for the slow speed of the decision-making.

Contador claims he does not really understand the decision, and reiterated the now-familiar argument about the small amounts of Clenbuterol found in his sample. There is no way the substance could have enhanced his performance, he argues.

Contador said he feels some "satisfaction" that the arbitration reports seems to acknowledge he did not dope (thanks Ted!). Here he is referring to the following statement from the arbiters:

Contador's lawyers, meanwhile, are studying the possibility of further appeals. Contador could still appeal to the Swiss courts or to the European courts to overturn the arbitration court's decision.

Bjarne Riis confirmed that he would like Contador to return to racing with Saxo Bank once his suspension is up. For now, however, due to his suspension, Contador can not be under contract. You will recall the UCI protests when Valverde showed up to do photo shoots with Movistar before his suspension ended. Riis said he would like to sit down with Contador and discuss the future.

"We see no reason not to support Contador, but we need to sit down and talk about the future. If Contador wants to continue with Saxo Bank, that would be my intention also," said Riis. "I will have no problem working with him again. He is a fantastic person. I haven't seen a bike racer like him in many, many years, maybe since Hinault and Merckx."

Contador is eligible to ride in August in time to race the Vuelta a España. Plainly, Riis would like to see the Spanish grand tour specialist wearing the Saxo Bank kit on the starting line. In his press statements, Contador has thanked the team for their support. But he will no doubt have offers from other teams between now and the end of his suspension.

On Twitter yesterday, Jonathan Vaughters, the president of the teams association hinted that the AIGCP might intervene in support of the Saxo Bank cause. It may yet be two to three weeks before a decision is announced on the Saxo Bank status.

Really, this is so much fun, I just don't want it to end.