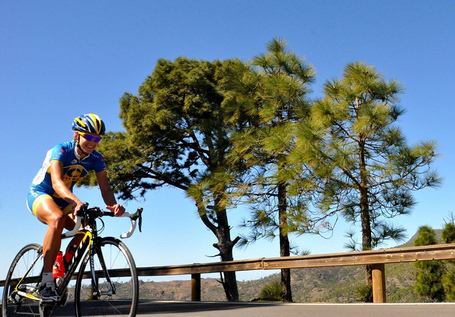 So you've logged into the FSA Directeur Sportif game and you're geeking out over points totals and whether Boonen winning in Qatar means Boonen winning in Flanders. Hint: It doesn't. Don't look like that! I'm just trying to help!

How is your women's team going? What?! You don't have a women's team? Plainly, we need to have a little talk. Below the fold, Gav's top ten reasons to play the women's FSA directeur sportif game.

Number 10: More is better. Girl racing is pretty much exactly like dude racing. Except, um, with girls instead of dudes. Right. Anyway, playing the women's game means more races to follow. And as we all know, more bike racing is better than less bike racing.

Number 8: New Races. This is not to say that the old races are bad or that we're tired of them. I could never become tired of dude racing. But, it's definitely fun to discover new ones. You've heard of Alfredo Binda, right? You haven't?! People! We have serious work to do here. Binda, he's Italian, he won some bike races, many bike races. Anyway, as it happens, there's a women's race in Varese named after him. Bet you didn't know that. I mean, if you didn't know who Binda is, you certainly don't know about his bike race. Well, here's your chance to learn.

Number 7: Marianne Vos. Vos is one of the most talented athletes in cycling. With every season she races, she is writing cycling history one pedal stroke at a time. It's rare that we have the chance to watch an athlete like her develop and grow into her talent. Last year, she conquered the high mountains to win her first Giro d'Italia. I was talking to Emma Pooley recently, and Pooley said, if Vos rides like she did this past year, she'll just keep winning. Laughing, Pooley said, "Why'd she have to get so bloody good!" And maybe someday Vos will have a race named after her just like Alfredo Binda.

Number 6: Bragging Rights. I mean, you might win or something. And all your friends? They will be so totally jealous.

Phew. How many more to go? Counting, almost as hard as days of the week. But we shall persevere! Onward!

Number 5: Drew is playing. I know! I'm totally reaching with this one. But it's true! Drew is playing, so you should, too. (No, Drew, you can not pick Katie Compton to staff your entire team.)

Number 4: The Olympics. It's an Olympic year. Which means, people are going to be talking about sports like cycling. Random people. People who work in your office or who go to your coffee shop. Here's your chance to impress them with your knowledge. Play the women's FSA directeur sportif game, and be able to tell people exactly who Evie Stevens is.

Number 3: You don't want to be like Pat McQuaid. Pat McQuaid thinks women's racing is lame and doesn't deserve attention. Don't be a Pat.

Number 1: And the most most important reason to play the women's FSA directeur sportif game? It's fun. Really, do I have to explain everything to you people?

Now go! Run along now! Go make your teams. And don't even talk to me until you're done.