Share All sharing options for: Strade Bianche - Building a classic 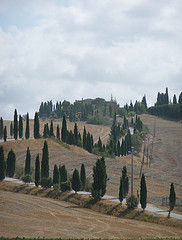 Cycling is a sport steeped in history. The calendar is built around races that have been around for a hundred years in some cases. Oldest of the big pro races still on the calendar, aptly nicknamed "La Doyenne" is Liege-Bastogne-Liege which has been around since 1892. Paris-Roubaix dates back to 1896 and the Tour of Flanders to 1913. Indeed the biggest of the one-day races are referred to as "classics", implying that they have a long rich history.*

So is it possible to start a modern bikerace and instantly elevate it to the level of a "classic" when you don't have that long history giving weight to the event? In Italy Giro organizers RCS Sport has gone about this methodically in order to establish a new classic, the Strade Bianche in the Tuscany region. Instead of relying on race history they instead built on the foundation of the enthusiast nostalgia-race L'Eroica where riders race on the gravel roads of Tuscany on classic steel bikes, recreating the conditions of the early days of bikeracing. This way they cleverly created a nostalgic connection without there, strictly speaking, being anything about their particular race to be nostalgic about. Sneaky, those Italians.

What is very real and very tangible though is the "strade bianche", the gravel roads in the area that create a unique challenge. The 2012 edition features about 60 kms of it, split into 8 sections very little of it on flat roads. In fact there aren't many meters of flat anywhere in the race thanks to the undulating Tuscan landscape and while it makes for beautiful images it also makes for hours of misery for the riders. The introduction of the these old gravel roads as a major element in Italian racing was really solidified in Stage 7 of the 2010 Giro d'Italia which turned into one of the most iconic days of racing in later years as Cadel Evans took a hard-fought and mudsoaked win. If cycling fans in general hadn't realized the greatness of the "white" roads before they certainly did after that day. The whole thing turned into one of the best PR moves ever in cycling, instantly bringing the potential for beauty and drama of the strade bianche to the attention of the mainstream cycling audience.

In it's five year history the race has proved to be a diverse and challenging race. After the first edition was held in the fall, in conjunction with the amateur race, already by the second year RCS moved it into the spring slot just before the Tirreno-Adriatico where it is now established. This had the immediate effect of attracting a whole different quality of field. Tirreno is traditionally the major warmup for the spring-monument hopefuls and now many of them line up for SB as well getting a good block of Italian races from Strade, via Tirreno culminating at Milano-Sanremo. This creates an odd mix of specialists that pretty well reflects the unique characteristics of the race. With it's combination of tough roads and challenging climbing/ hilliness it is a route that suits not only the cobbles hardmen but also the ardennes-specialists. Indeed, after the finishing approach up to the Piazza del Campo in Siena was altered in 2009 the climbers are probably more favored in spite of the fact that many of them are earlier in their season preparations that the cobbles dudes who are near their peak. Predictably the teamrosters have also gradually become more climber-heavy with every year.

The introduction of that steeper finishing approach, as challenging as it is, might also be one of the few weaknesses in the race in it's current form. It does seem to have established a pretty set formula for the race. The gravel climbs create a gradual whittling down of the peloton to a select group of about 10 riders or so that come into Siena together. Then it is all about sprinting up the steep ramp towards the square in order to be the first to make the turn at the top because while there is still a good few hundred meters left to the square, the narrow winding roads make it near impossible to overtake without borderline dodgy riding. The only one to manage it has been Maxim Iglinsky in 2010 but with a tiniest bit of bad luck that could have turned into disaster and polemica instead of a brilliant win. Likewise that tough climb makes it hard for anyone to make an attack in the final kms stick, encouraging passive riding in the final approach. The one factor that we haven't really seen in play yet is weather. The rain that turned the Giro stage into (dare I say it?) an epic day of racing has never been a factor yet. Perhaps in a wet edition we will see a whole different race? It wouldn't make this the first race with two completely different faces depending on weather-conditions.

The other major thing standing between this race and full classic-status worthiness is the fact that the organizers only allow for a smaller field of riders. Citing logistical issues with bringing a full size field and race-caravan on the very small and narrow roads around Siena they only invite 14 teams to ride. This means that it will certainly never be eligible for World Tour status and it can never really claim to have a fully competitive field. Notable absentees this year include, Sky, Rabobank, Omega-QS, Lotto and SaxoBank and there you find some of the dominant riders this spring so it's hard to argue that the race features a top field. It seems a shame but if the organizers have made a correct evaluation of the safety and fairness issues there is something commendable in not expanding the race beyond the current format. The prestige of the race will have to be judged accordingly though.

So what about this years race? What can we expect from this edition? Well firstly, it will be the first time we will have the opportunity to see the race live, previously having to be content with post-race highlights. Presumably we should get to see the final three or four (depending on the pace of the racing) gravel sections in the live broadcast. Racing-wise, like so many races this year, the big question will be if anyone can touch last years winner Phillippe Gilbert. He won the race on his first try and indeed he seems custom-built for this course (which course does he not seem to be custom-built for?). Is he in form yet? In the Omloop we never really got to find out due to a mechanical but past experience tells us that Phil rarely shows up to any races without at least some race-winning form.Looking at the BMC roster is scary as usual with Strade Bianche vet Ballan, Evans, Pinotti and in-form Van Avermaet lining up alongside Gilbert. Going up against them will be a Garmin team with two riders well suited to this race, Ryder Hesjedal and Fabian Wegmann. Hesjedal is something of a specialist in this race always there or thereabouts while Wegmann has already podiumed here once and is probably looking to get off to a good start o his new squad. Stetina, Martin and Maaskant are all competent support with capacity to be factors in the finale as well. Liquigas are bringing both Nibali and Sagan, both legitimate contenders, and to spice things up there is recent Laigueglia winner Moreno Moser making his first appearance in a major race.

Other names worth looking out for on Saturday include Movistar's italian champion Giovanni Visconti , Francesco Ginnanni of Aqua&Sapone and Astana's Gasparotto and Kessiakoff for example. TeamType1 have secured an invite for the second year. Bertogliati had a good showing for them last year and this year they also have Julien El Fares who was on good form in Haut Var and likes these kinds of finishes. They could both do well on Saturday. Radioshack are bringing some dude called Cancellara or something and apparently he's pretty good? Seriously though, Cance is one of the riders who has probably been taken out of contention by that finale, I can see him going into the finish in the lead group every time but I can't really see him winning anymore. For guys like him to win now it's going to take a real long range attack. I'd sure love to see him try though.

So whether you think this is a real classic yet or not, this will be a race you won't want to miss. It really has something unique that no other race has. Besides, racing in Italy, when did it ever disappoint?

* The word classics isn't un-complicated. While most english speakers associate the word with a certain status and history, for the dutch-speakers a classic is more or less only a word for "one-day race".