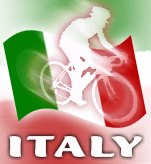 On a final climb where most of the GC favorites played an active role, Vincenzo Nibali launched the one attack that proved decisive. He took the stagewin 15 seconds before what appears to be the main rivals for the final GC, Roman Kreuziger and Chris Horner. Horner stays in the lead with a 5 and 12 sec lead on Kreuziger and Nibali respectively. Michele Scarponi was dropped from the group of favorites but recovered nicely and stays in the top 5 overall.