Share All sharing options for: Tirreno Stage 6: J-Rod Flies Away 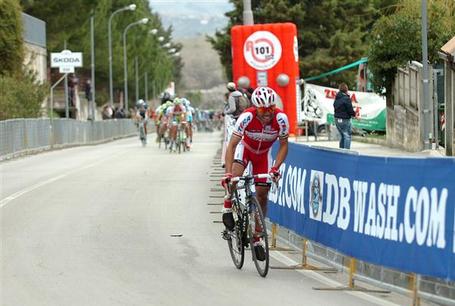 Joaquim Rodriguez of Katusha resumed his old habit of winning a stage of Tirreno-Adriatico with a solo victory in Offida, Italy today. Twice in 2008-09 he scored impressive wins at Montelupone, and while today's course was less inspiring, Rodriguez' effort wasn't. The Spanish star galloped away from the reduced field of overall contenders under the 1km banner with a blistering acceleration, and nobody got his wheel again, as he hung on for victory by a handful of meters. Liquigas' Vincenzo Nibali took the consolation prize ahead of Danilo DiLuca of Acqua e Sapone, with Chris Horner of Radio Shack-Nissan-Trek protecting his overall lead by finishing fourth. Horner, Nibali and Roman Kreuziger, all strong time triallists, should stage a whopping battle in tomorrow's closing crono. Results: