Paris-Nice: Wiggins has his Moment in the Sun

Share All sharing options for: Paris-Nice: Wiggins has his Moment in the Sun 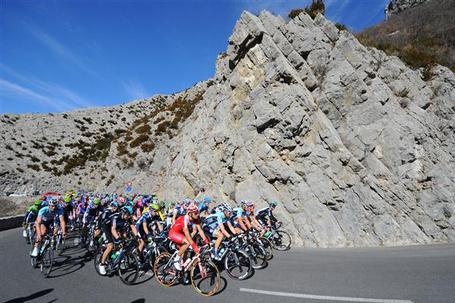 On Sunday Bradley Wiggins won the final time trial up the Col d'Èze at Paris-Nice and sealed his overall victory. Wiggins seized the Yellow Jersey of race leader on the second day of the race, and never let it go. In a pattern, he no doubt hopes to follow in July, Wiggins won largely on his strength in the time trials.

"If I can win Paris-Nice, I can win the Tour de France," Wiggins told The Guardian.

People! It's March! Let's not get carried away!

Wiggins beat a strong, but by no means July-strong field at the race to the sun. Lieuwe Westra finished second overall at 8 seconds, Alejandro Valverde finished third at 1:10. Westra gave Wiggins a solid challenge on the Col d'Èze and finished just 2 seconds behind Wiggins on the stage. Westra also won the challenging climbing finish in Mende.

The young American Tejay van Garderen began Paris-Nice with hopes of chasing the Yellow Jersey. Van Garderen, he wants to win, though his legs aren't quite up to the task just yet. Van Garderen's slide down the overall classification began in Mende when he finished just over 30 seconds behind the leaders. On the Col d'Èze, he finished fourteenth, 1:15 behind Bradley Wiggins. Van Garderen managed fifth overall, which really, is a nice result when it comes right down to it.

For Levi Leipheimer, who sat close to the overall for much of the week, Saturday's stage from Sisteron to Nice meant the end of his hopes. Leipheimer had a disaster day. He crashed not only once, but three times on the descent off the Col de Vence. Valverde's Movistar team drove the field hard on the descent, which prompted some riders and fans to cry foul. That's bike racing, sometimes. The strong do what they can, the weak suffer what they must.

Leipheimer reached Sisteron more than 16 minutes behind stage winner Thomas De Gendt. In Nice, he managed 22nd on the Col d'Èze, but it was surely not what he'd expected back in Paris when the race began.

Since the announcement of this year's Tour de France course, Wiggins has ranked among the top favorites. The course this year does the climbers no favors. Eat your heart out Andy! Wiggins will love the endless kilometers of time trialing come July. So too will Cadel Evans. Where is Evans, anyway? Evans, he's taking it tranquilo and racing Tirreno-Adriatico. No early-season hijinx for him.

Anyway, it's a long time until July. Really, I can't think that far ahead. I think I know what I'm having for lunch, maybe.

Bradley Wiggins is the second-ever British winner of Paris-Nice. Forty-five years ago, Tom Simpson won the Race to the Sun. Whatever happens down the road, Wiggins rode a near-perfect race this past week. His opening time trial put him close to the race lead, then smart riding put him into the Yellow Jersey on the time bonus. He defended well on the key climbing stage in Mende. Then, he punctuated his performance with a stage victory on the Col d'Èze. Really, it doesn't get much better than that.

Here are the final results for Paris-Nice.