Share All sharing options for: The Olympics' 50 Craziest Stories, by Les Woodland 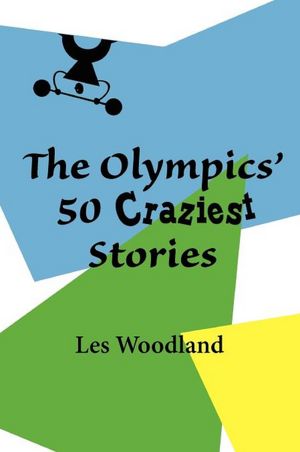 Title: The Olympics' 50 Craziest Stories
Author: Les Woodland
Publisher: McGann Publishing
Year: 2011
Pages: 158
Order: McGann Publishing
What it is: A compendium of crazy stories collected from the history of the Olympic Games.
Strengths: Woodland's stories are entertaining and cover a wide variety of sports and the whole history of the Olympic Games.
Weaknesses: It is what it is - a light and slight glimpse behind the Games' curtain.

2012 is an Olympic year. I know, that one totally slipped under the radar, caught you totally by surprise, but it's true: the Cold War's five-ring circus - now re-branded as global business's international school sports' day - is washing up in London come Summer. So I guess it's high time we started to get excited about the Olympic Games. And what better place to start than a compendium of eccentric stories from down through the history of the modern Olympics?

Not unlike his The Crooked Path To Victory, Les Woodland's The Olympics' 50 Craziest Stories is a collection of, well, crazy stories, all joined by the theme of the Olympics. As well as the 50 craziest stories, Woodland tosses in as many and more daft tales, and all sorts of trivia about the Games. All told there's easily a couple of hundred tales told in The Olympics' 50 Craziest Stories. If that seems crazy then it's no more crazy than most of the stories Woodland tells.

One of the funny things about Woodland's book is that it shows the lengths some people will go to in order to take part in the Games, and the lengths others will go to stop them taking part. How unsporting the Olympics have always been. There's the story of Hermann Ratjen, who competed in the 1936 Games as Dora. Ditto Mark Weston who competed as Mary. There's the story of the attempted knee-capping of Nancy Kerrigan. The story of the French skating judge who sold a gold medal to the Russians in return for the Russians fixing a gold for France. The more you read stories like these, the more you wonder why people rate the Games so highly.

Some of Woodland's stories are cycling related. There's the tale of Pierre Trentin and Giovanni Pattenella's 22 minute sprint in the 1964 Games: those were the days before epic track stands were banned by the powers that be, before lesser nations were expected to simply concede defeat by leading Chris Hoy out in the sprint for the line. Or accused of cheating for daring to sprint from the gun.

My fave cycling story comes from 1896, a year I seem to have found myself stuck in recently (an Irishman, Harry Reynolds, won the World Championships, another Irishman, Teddy Hale, won the Madison Square Garden International Six Day Race and Bordeaux-Paris was won on a bike that didn't have a chain). This particular story concerns Edward Battel and Frank Keeping. Two Brits. Domestic staff on the Athens Embassy. Who, hearing about the Games, decided to chance their arms in the cycling events. Baron Pierre de Coubertin & Co had no issue with their taking part. But their home nation did. They didn't like the cut of Keeping and Battel's jibs. Not the right sort of people to represent Queen and Empire. Oiks. Proles. Commoners. So the rules about amateurism were called upon. Battel and Keeping were told to piss off, in the politest possible terms.

Then the world got to hear of Battel and Keeping. Even then ordinary people knew than amateurism was shamateurism, a cheap and nasty way of keeping the wrong sort of people in their place at the bottom of society's ladder. The world pointed at Britain and laughed. And mocked. And laughed some more. Displaying considerable lack of backbone and a not very stiff upper lip, the Brits backed down and Battel and Keeping were permitted to represent Queen and Country on their bikes. And a jolly good show they put on too, bringing home silver and bronze and proving to the world that the Brits were up there with the best when it came to this cycling lark.

It is to be hoped that Battel and Keeping were better rewarded - and - remembered that a Frenchman called Vasserot. He won a silver medal during the Paris Games in 1900 but didn't discover this fact until 1965, when the French Olympic Committee realised the old codger was still kicking around. Apparently this Vasserot hadn't even realised he'd taken part in the Olympics: he thought he'd just turned up for some race in Valenciennes.

All told, I'm no great fan of the Olympics. But I'm not quite in the same camp as the Dutch queen, Willhelmina, who, in 1928, when the Games were being held in Amsterdam, decided to decamp to Norway so as to avoid the Games's opening ceremony. Was it because the city had a mayor like Boris Johnson? Not quite. Apparently Queen Wil believed the Games were a celebration of paganism (given the sacrifice today being made to Mammon in the name of the Games, you do wonder if maybe she had a point). She also had a problem with women taking part (as did the mad Baron, Pierre de Coubertin, and the cycling-loving CEO of Vatican Inc).

Whether you're a fan or not of the Games Woodland's book is an entertaining little jaunt through the seedier side of the Olympics and the ideal tonic for all the bullshit that's quadrennialy spread around as the Games approach, all that crap about the Corinthian spirit, the glory of the Games and how it's the taking part and not the winning that counts. The Olympic Games have only ever been about one thing: winning at all costs. As Woodland helps to demonstrate in The Olympics' 50 Craziest Stories.