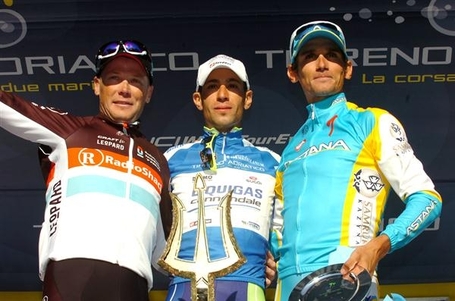 Liquigas captain Vincenzo Nibali seized the overall victory at Tirreno-Adriatico and staked his claim to potential big success on the stage race circuit with a strong time trial in San Benedetto del Tronto today. Coming into the finale six seconds behind overall leader Chris Horner of Radio Shack-Nissan-Trek and a second behind Astana's Roman Kreuziger, Nibali finished ninth on the day, 20 seconds behind stage winner Fabian Cancellara, well ahead of both Horner (+0.40) and Kreuziger (+0.47) on the nine-km circuit. Horner was far from upset with the result, coming so early in the season, and on the heels of an eight-month layoff following a crash in the 2011 Tour de France.

Horner's teammate Cancellara continued his strong spring with a thoroughly unsurprising victory in the discipline he has so dominated for much of the last decade, while another R-N-T squad member Daniele Bennati rode an intriguingly strong race for second on the day. The two now turn to the classics season in prime condition and with big ambitions.

Nibali, meanwhile, came up big again in a stage race, albeit a far less significant one than the Vuelta he dramatically won 18 months ago, or the Tour de France that looms in his near future four months from now. And to be clear, a 9-km crono effort does little to foreshadow success on the long time trials of the Tour, and Nibali's history of crono success is more clear at the shorter distances. But Nibali is a fighter, and so far at least his career has unfolded very differently from that of Kreuziger, his former teammate who once said Nibali has a "small engine." If that were true, it says even more about the Sicilian's head, or heart, or both. 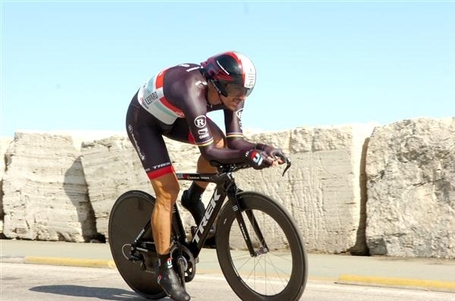