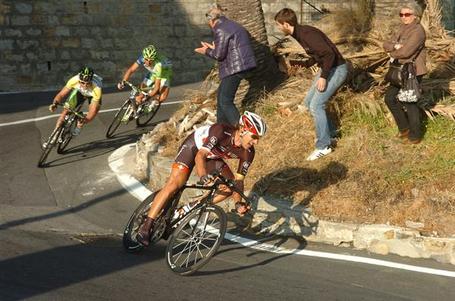 Simon Gerrans of GreenEdge defended Australia's suddenly burgeoning record of Classicissima success by coming past Radio Shack-Nissan-Trek's Fabian Cancellara in the closing meters, finishing off a three-man break from the Poggio for the victory in Milano-Sanremo. Liquigas's Vincenzo Nibali triggered the winning move with an attack near the summit of the iconic final climb, and first Gerrans and then Cancellara seized the moment to form a breakaway. A reduced peloton of a dozen riders, led by Katusha and Oscar Freire, came within a whisker of closing the gap, but they left it too late. Gerrans had sat firmly on Cancellara's wheel, and came around the Swiss Bear just in time for a half-meter win.

The peloton was somewhat intact entering the Poggio. World Champion Mark Cavendish of Team Sky fell off the pace early, on the climb of Le Manie with 95km to go, and when the gap grew to over 1.30 it was desperation time. He had a handful of teammates trying to pull him back, and celebrity company in the form of Tyler Farrar of Garmin-Barracuda, but the group never rejoined. BMC lost Philippe Gilbert in a crash on the Cipressa, which saw a dozen or so riders unhitched from the pack at the wrong time, including Garmin's other hope, Heinrich Haussler, and former Giro winner Danilo DiLuca of Acqua e Sapone. But the remaining heads of state were primed and ready in the 40+ riders leading the charge.

Valerio Agnolli and Angel Madrazo enlivened the Poggio with an early acceleration, with Madrazo extending it after Agnolli. With 2km to the top Vincenzo Nibali accelerated with Simon Gerrans, while Fabian Cancellara responded to get on their wheel. The three went over the top with 5" lead, followed by Katusha and Freire. Nibali and Gerrans stayed on Cancellara's wheel as they came off the Poggio with a 12" gap. Katusha continued to lead the chase, but had Peter Sagan of Liquigas in their wheels, and John Degenkolb of 1T4I threatening to steal the sprint, if it happened. It never did.

In the closing km Gerrans did take a short turn at the front, while Nibali steadfastly refused, knowing he had no chance in an even sprint. Gerrans knew he did, and Cancellara knew that his only prayer was to stay away, something he and his massive engine could assure. So the two kept up the pace, and in the end Gerrans had the legs and the timing to finish it off.

The win is easily the highlight of Gerrans' career. At 31, the Aussie is off to a fantastic start after winning the Tour Down Under. He's shown solid classics chops recently with a second place in the GP Plouay last summer. But this is his first time coming anywhere near the front of a Monument. With Matt Goss winning last year, there is continued joy Down Under this morning, and maybe a little relief as newcomers GreenEdge have planted themselves firmly into the center of the Spring Classics conversation. Podium here, full results on the flip: