Friday Review: Cobbles! And the other things we did!

Share All sharing options for: Friday Review: Cobbles! And the other things we did! 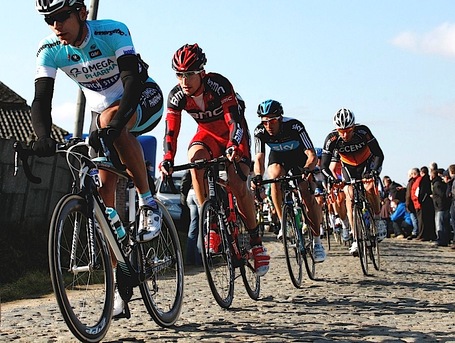 It's Friday! TGIF! That means there is racing tomorrow! Yes!

But you don't really think that's all that we've been up to, do you...?

I could start off by talking about something other than cobbles. But, that might get me lynched in this particular cafe. So I should point out that we had not one, not two, but three (three!) cobbled races over the weekend. And what did we make of them?

Well, Sep Vanmarke is evidently the next big thing. He did win Het Nieuwsblad after all, which is kind of a big deal. Especially because he is young, young, young! Oh Sep, don't let the pressure get to you! And, oh, there was smack talk between him and Boonen. Maybe. Who knows? I don't, I speak not the Flemish. It may have just been congratulations.

If you were attentive, you realized that les dames also raced a Het Whatchamacallit, which Loes Gunnewijk won. The Green Edge gals are so killing the guys in the results so far.

I hear Kuurne-Brussels-Kuurne has cobbles and climbs and cobbly climbs too, but they must not be too bad because Mark Cavendish won there. Granted, he could totally school me on some cobbled riding, so maybe I shouldn't stereotype?

We had one last fling in Belgium with Le Samyn, which you should have watched just so you could see Frites Man. And also because Arnaud Démare won there. I told you it was a good place to find up-and-coming talent, didn't I? Unfortunately, being young also means you have craaaaazy victory salutes. Like, what is he, an airplane?

We chatted with Robert Penn, author of It's All About the Bike. And we also looked at bike art. Yay, bikes!

After we looked at pretty bikes, we jumped into the collegiate racing season. Sometimes, racing at the back is a lot more fun than it sounds. Not that Evie Stevens would know, she was too busy winning behind to spend time in the autobus.

Now, go forth and enjoy your weekend. But don't forget, there is moar racing too! There is the venerable Paris-Nice starts Sunday. So watch it. Or learn all about hyphenated town names instead. There might even be a preview hidden in those words.