Heigh-ho, heigh-ho, the cobbles are back! There is only one thing wrong with Dwars door Vlaanderen, and that's that it is on a Wednesday where I can't quite get away with boozing up while watching the race. Everything else about it is totally aces though. Hellingen? Check, 13 of them. Cobbled sectors? Check, three of them. Enough loops, roundabouts and turn arounds that the map makes you totally dizzy? Check. Plus, cobbles. Cobbles rock.

For those of you not completely fluent in the language called Dutch (or Nederlands, Vloamsch or Diets), Dwars door Vlaanderen means Straight through Flanders which is a bit of a deceptive name considering they only go through a little tiny bit of Flanders, but I'm willing to ignore that minute flaw on account of this race being awesome.

Below the fold I give you a wee overview, featuring all your (ok, all my) favourites participants. I also go off on lots of tangents cause that's pretty much what I do. 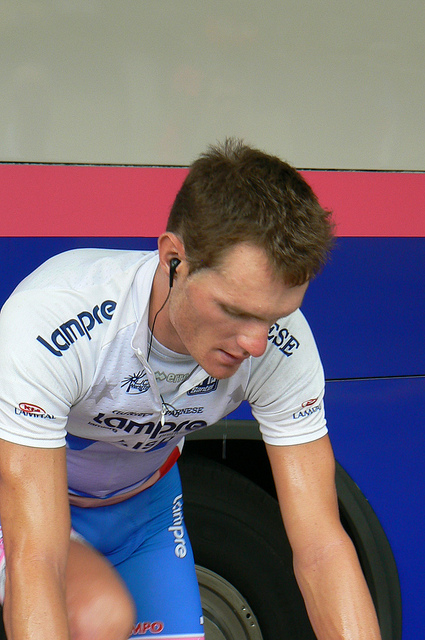 We'll start with the big name with the fewest cards to play. Of course Saxo can claim 'bad luck', but really, is there a better example of the tale of the eggs and the basket? I don't think so. Who do they have left? Well, Troels Ronning Vinther is an awesome name. That's all I've got. Oh, I also wished they'd move Karsten Kroon from the bench, cause he's on my VDS team and I'm still 165 points behind dj.

On to our brown helmeted friends at Ag2R then. I can't believe only five teams were smart enough to pick Kristof Goddaert. I can't believe I didn't pick Kristof Goddaert. I'm an idiot! I mean, he's a former TSV'er who, in his first year with the development squad got a 6th place in Le Samyn, a 12th in Scheldeprijs and a 9th in Paris-Tours. He's got top 10 placements in Paris-Bruxelles, Gent-Wevelgem and... Dwars door Vlaanderen. That's perfect for me! Also, he seems to in general not give a shit about GT racing. I'm telling you, perfect.

Another possible Ag2R wildcard is Lloyd Mondory, who is on only one VDS squad, despite getting top 20 in no less than five different Belgian classics last year. Seriously people, it's not looking like we know anything about cycling, so far. But, I do admit it's not always easy when riders can just flip between invisibility and normal life, like they own some kind of goddamn Harry Pottercloak. Take Maxim Iglinksiy for instance. In 2010 he was aces. In 2011 he was absolutely nowhere. So, logically, he should be back this year, right. A 2nd in Strade Bianchi seems to support my hypothesis. If we're going to a sprint - please God don't let it end in a sprint - then Jacopo Guarnieri is the Kazakh pyjamaboys best bet. 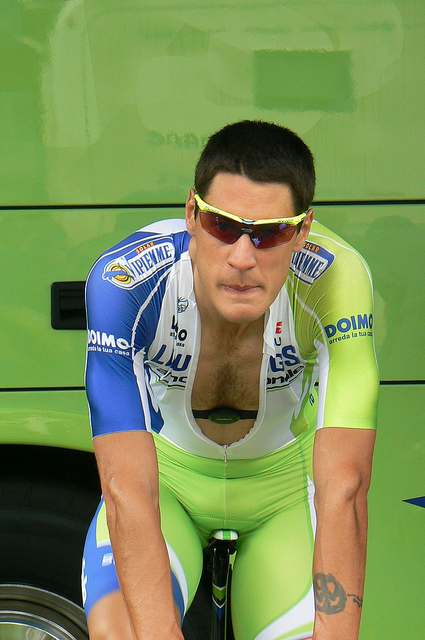 But if it does go to a sprint - please God don't let it end in a sprint - then GreenEdge has a pretty damn decent chance here. Cause Matthew Goss and Aidis Kruopis are both pretty swift you know. Their best strategy? Send Jens Mouris in a good break - one that stands a chance, not the first little 'who are you?' escapes - and have their aforemented speedy speedy boys sit back to be towed to the line. If a decision needs to be make towards the very end, Goss for jumping with what might be a winning attack, Kruopis for peloton plan B.

What other sprinters are there, you ask?

Why do you ask, by the way?

I mean. Surely. Surely you're not hoping for this to... end in a sprint? Right?

Where were we? Right. Other sprinters. Katusha has the fearsome twosome of Oscarcito "let's play some tennis bro!" Freire and Denis Galimzyanov, together with the not quite as fearsome Alexandr Kristoff. A propos to nothing, they also have a kid called Marco Huller about who I know absolutely nothing, so please, if you do, educate me. Movistar's fast man is, of course, José Joauquin Rojas.

An Post - Sean Kelly's designated sprinter is the English-language journalist's worst nightmare Gediminas Bagdonas but I'm willing to bet all my chickens that at one point in the race we'll see super-über hardman Nico Eeckhout go for an attack. Cause people, that dude is crazy HTFU. I'm assuming NetApp (for Jerome Baugnies, who is all kinds of awesome you know) and Spidertech (for Guillaume Boivin, who is precisely as fast as Phinney) will gun for a sprint also, but really I don't know the other guys in their squads very well. Though Simon Lambert-Lemay sounds like he should own a castle, not ride a bike. 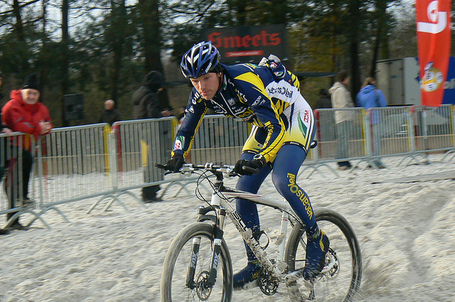 Speaking of sprinters, Vacansoleil have Kris Boeckmans who is a) fast, b) a former TSV kid so I kind of really like him, Thomas De Gendt who is only outtrumped in awesomeness by master Sep, Johny Hoogerland who is crazy and therefore must be cheered, Frederik Veuchelen who likes to attack and who showed up for Tombo's charity race (that's him above), and Lieuwe Westra who was so busy cheering a stage win that it probably made him lose a GC win, and I like happiness.

Question: when did this team get so awesome? Cause I totally missed that moment.

Speaking of missing something, why does Rabo have all their sprinters on the bench? Theo Bos, reserve. Graeme Brown, reserve. Mark Renshaw, reserve. Michael Matthews, reserve. I mean, shouldn't they at least put one of those in the actual team? I get trying to play the Matti Breschel card - by the way, do you know the story of Breschel's fanclub? - but shouldn't you have something of a fall-back option?

Cause that whole hard man attacks - fast man sits back plan often works quite well. OPQS can do that with Sylvain Chavanel and Gerard Ciolek (don't laugh, he knows what winning is again); Sky with Juan Antonio Flecha and well, not Cav or EBH cause they're also with the reserves, but maybe with Matthew Hayman? Garmin can act likewise, with Seba Rosseler and Sep Vanmarcke for attackiness (and maybe even Martijn Maaskant if I fell asleep and this is 2009 again), Heinrich Haussler (I refuse to add the G, I'm sorry) be something in between and Tyler Farrar to sprint. And, lest I miss them (I don't know how I could possibly miss them, them being so fluorescent and all), Filippo Pozzato to attack and Oscar Gatto to sprint for Farnese Vini. 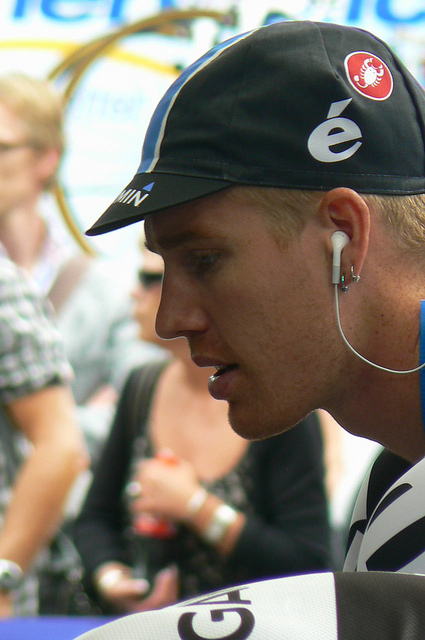 But you know who's really going to win?