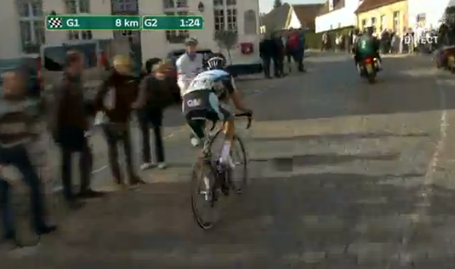 Sep Vanmarcke of Garmin-Barracuda tried to change the outcome with an attack off the peloton on the Paterberg, resulting in an elite chase group with Filippo Pozzato (Farnese Vini) and Jens Keukeleire (GreenEdge) in tow, an effort that joined the remnants of the original escape. But they got nothing organized and Terpstra's 1.20-ish gap held almost all the way to the line. To underline the dilemma their rivals faced, Chavanel eventually escaped the chase and took second in a sprint with Koen de Kort (1T4I), even raising his arms in celebration, presumably for the whole squad. Great day for Belgium's SuperTeam, and for the Dutch rider who secured his biggest victory ever. Results:

Highlight of the Day: 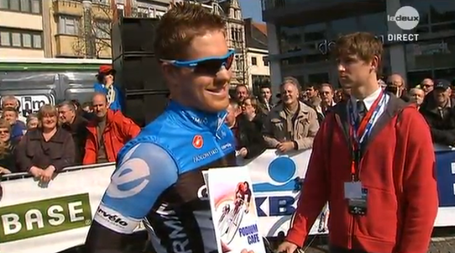