Sunday is such a good Classics day! Over in Belgium, there's Gent-Wevelgem, but the big women's race of the day is Round 2 of the Road World Cup - the Trofeo Alfredo Binda-Comune di Cittiglio. It may not have cobbles, but it has lots of hills, and always explosive racing, in one of the best organised women's races out there. These organisers bend over backwards to help us love their race! Check out their English-language website, facebook, twitter and youtube for examples of how!

Below the jump, I'll tell you more about the parcours - and how to follow the race - but here's a little taster of what's happened in previous years.

And as always, check out and add to the comments for other information you find! EDIT! Monty has already added a ton of links to videos from recent women's races - have a look, they're great!

The race goes right back to 1974, and is named in honour of Italian superstar, Alfredo Binda, who won the Giro d'Italia five times between 1925-33, the first ever multiple Giro winner, and went on to train Fausto Coppi and Gino Bartali. Check out his wikipedia profile and sigh happily!

The parcours are the same as last year, and because this race REALLY loves us, here's their video of what the riders can expect: 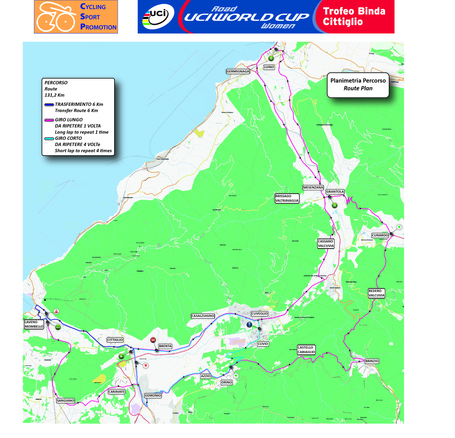 It's Varese province, racing in the hills around Lake Maggiore - home of lovely scenery and climbs to burn your thighs. Here's the parcours as described by Monty last year:

From Cittiglio the race follows a long and narrow loop northwards following the valley that leads to the small towns of Germignaga and Luino on the shore of Lake Maggiore, then returns via the climb of Grantola, 4km long with a gain in height of about 200m, which works out at about 5% average. It then heads on to a shorter circuit where the climb of the Orino gains those same 200m but in just 3km, i.e. at 7% gradient, and repeats that four times for a total race length of 121.4km, or about three hours of racing.

You might have noticed the steep descent, with the metal crash barriers - this is an especially treacherous moment, where riders come to grief every year. And for the riders who make it to the final lap, that hill is all about attrition. It's a HARD race, and for the last four years, as you might have noticed from the "history" video at the top of the article, it's been dominated by two riders - Emma Pooley and Marianne Vos.

Pooley's signature tactic in this race is a killer attack, and a solo ride to the finish - last year she just would not stop trying, so eventually the peloton, ground down by the rain and having to chase all the early efforts, had no choice but to let her go when she had yet another attack on the flat, while half the riders were eating. They may have thought they could pull her back, but Pooley is damn hard to catch, especially when there are hills. She won solo in 2008, and in 2009 very nearly did the same - only was chased and caught, and the race ended with Vos going head-to-head with Emma Johansson, with Kristin Armstrong and Eva Lutz three and a half minutes behind them. In 2010, Vos won from a small-but-perfectly-formed group, having chased down Olga Zabelinskaya's last-lap attack.

This year? I have no idea! It could be any of them, and I love it like that! You can't go wrong expecting GreenEdge's Judith Arndt and Hitec-Mistral's Emma Johansson to be up in the action - and I can't wait to see what Noemi Cantele does, given a free rein for her brand-new team Be:Pink. Here's the startlist - with a special mention for the fact it's Annemiek van Vleuten's first race of the season, and Kristin Armstrong returning to the European roads for possibly the first time since she had her baby in 2010.

If you want to follow this one, there are a number of ways. As the race is happening, the race organisers' will be tweeting up a storm, giving live, real-time updates on the action. And for those with racing-Dutch, Richard Steege, the mechanic from Dolmans-Boels is fantastic at tweeting updates live from the team car - and given that their star rider, Martine Bras, is always competitive in this race, he's bound to be up in the action. We'll probably have a live-ish fanpost for those who like to follow races this way.

Then there'll be highlights shown on RAISport2 at 20:00 CEST - that's 7pm BST, 2pm USA Eastern, 11am USA Western, or 5am Monday for Australians in Melbourne and Sydney (sorry guys) - and we'll have a livethread up to follow that, with NO SPOILERS! for those who can ignore the internet!

And you know the rest - if you find anything else out about the race, add it to the comments - and keep checking back for everyone else's updates. This is going to be a good one - and if you have your appetite whetted, and are wondering what's next for the women after this, check out my "10 women's races you shouldn't miss" post - thankyou!