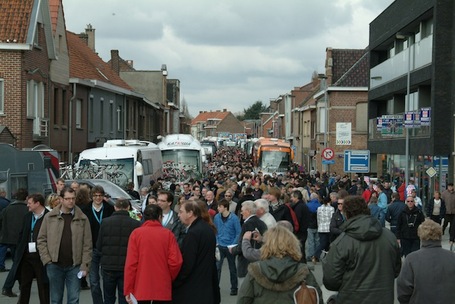 Tomorrow in Harelbeke marks the 55th running of E3 Harelbeke, formerly E3 Prijs Vlaanderen. Another name that applies is the Best of the non-Monument Rest of the Spring Classics scene. And everybody knows it.

Gent-Wevelgem knows it. For the past several years they have tried to muscle the E3 out of their way. Why? Because Gent-Wevelgem is connected to Flanders Classics and the E3 isn't. Each race has its own local organization, and the good folks of the Koninklijke Veloclub Het Vliegend Wiel in Wevelgem are presumably motivated by nothing more sinister than a desire to make their race as big a deal as possible. But they've used the muscle of Flanders Classics to go after E3, nearly killing it off last year, til the UCI stepped in and fixed things. Yes, you read that sentence correctly.

How is this possible? To the flip!

A lot of you know the history, so I'll keep it brief. Gent-Wevelgem is one of a handful of post-WWII races to come on line in Flanders, resulting in a spring cobbles season. [Technically GW actually had some earlier pre-war editions, though with amateurs.] GW was a weekend race, then on Wednesday between Flanders and Roubaix, before wrestling free of that sandwich in 2010, when it became the Sunday race a week before De Ronde. Prior to then, E3 Prijs, named after the opening of a highway that's now the A14, owned the pre-Ronde weekend with its Saturday running. By incorporating a heaping helping of the Flemish Ardennes, the race attracted the lion's share of guys focused on Vlaanderens mooiste. GW, which tours flatter West Flanders (and has its own brilliant, unique character as a result), can't offer the same level of Ronde tuneup.

In 2010, with the two races going head-to-head on the same weekend, a few teams skipped E3 entirely, but the biggest names like Boonen and Cancellara rode hard on E3 Saturday and used GW for some cool-down miles, leaving the real contest at GW to the more sprinterly inclined. Last year the UCI points system started changing team behaviors. GW was included in the World Tour, E3 was not. Some, like Cancellara, stuck with (and fricking crushed) E3, but Boonen was ordered by his team (desperate for WT team points in spring) to ride GW instead, despite being very open in his preference for the E3 miles. "Boonen ordered out" is a dangerous precedent to any going concern within Belgian borders, and the race started making threats about needing to shut itself down.

In stepped the UCI, which came up with a shockingly sensible compromise: add E3 to the World Tour, and back it up a day. Now the races go E3 Friday, GW Sunday. In theory the top riders can ride both. GW and its organizers have accepted this theory, or at least I haven't heard the protest.

In truth, GW have lost the battle. There is no substitute for E3's Ronde-like miles, and Gent-Wevelgem can't add enough climbs (up to 11 now) to dissuade teams from regarding it as more of a versatile sprinters' event. Compare some startlists:

The teams have spoken. Peter vs. Juraj. Couldn't get any clearer.

As far as this year's E3, here is your wildly exaggerated profile, even by wildly-exaggerated-profile standards. Click to embiggen: 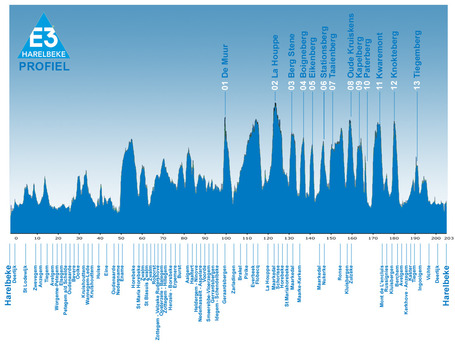 The big story is the in-your-face capitalization by the E3 organizers on the Ronde/Muur exclusion controversy, resulting in the most famous of famed cobbled ascents being included in tomorrow's race. Also fortunately, the Muur has not been sharpened to a point that it will be shredding tires as riders pass over its hallowed slopes, profile notwithstanding. On the downside, Harelbeke is a long way from Geraardsbergen, and at the halfway point of a 200km event even the Muur won't be able to shake things up much. But it will do what it does, looking pretty, and with any luck Screaming Guy and Colnago Sweater Guy have the day off tomorrow.

As far as I can tell, the post-Muur course is identical to 2011, with the remaining dozen climbs coming in the same sequence as before. There are plenty of nasty cobbles -- Abdijstraat, Holleweg, Paddestraat, and some other scattered bits -- but the game will probably be settled on the hellingen. Not that there's anything wrong with it.

This really is my favorite non-monument race of the entire year. If you had to choose one day of the upcoming weekday classics to call in sick, I'd vote for tomorrow. Maybe start looking a bit pale now. See you in the morning.

Oh, and Patrick sends along some E3 publicity posters. There's this year's gem: 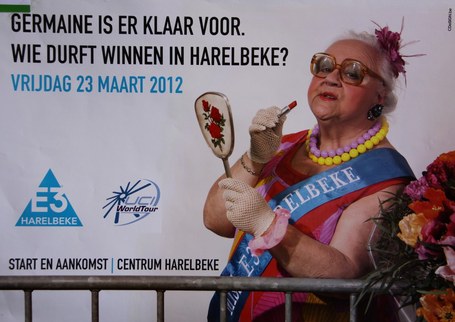 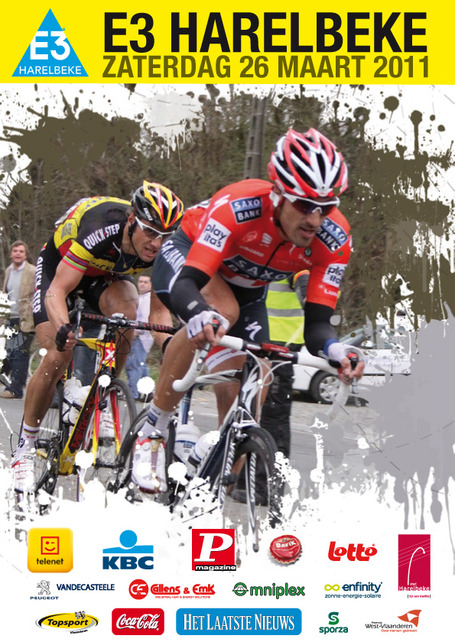 A tad business-like. Which is explained by the fact that they had an original, not especially safe for work, version they needed to replace.