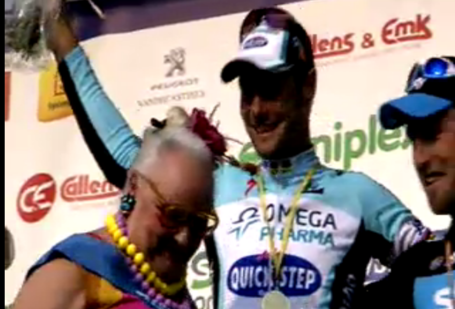 Tom Boonen of Omega Pharma Quick Step sprinted from a large group to win the E3 Harelbeke for a record fifth time, beating Katusha's Oscar Freire by the slimmest of margins. The Flemish hero, who owned this race from 2004-07 and finished second two more times, hit the gas coming out of the final corner in Harelbeke, easily distancing all but Freire, who stayed close but couldn't secure the extra half-meter he needed. Boonen's win moves him out of a tie with Rik Van Looy, the only other four-time winner of the preeminent tuneup race for the Ronde van Vlaanderen.

The finale included about 35 riders, including nearly all of the big names apart from BMC's Philippe Gilbert, who left the race with over an hour to go, apparently feeling unwell. It was a crazy scene in the final hour or so, with Fabian Cancellara -- winner of the last two editions -- attacking on the Oude Kwaremont, then struggling and dropping fast with an apparent mechanical problem, then crashing with Carlos Barredo into some bystanding team folks, then chasing back madly. By the time the dust settled, OPQ's Sylvain Chavanel was up the road with Astana's Simon Spilak and Katusha's Dmitry Muravyev. Sep Vanmarcke of Garmin-Barracuda, seen on the front all day, reacted to nearly every acceleration from Boonen, Cancellara or Leukemans, but ultimately the elite group including sprinters like Sagan, Degenkolb and Boasson Hagen stuck together.

On the Varentstraat cobbles the break went out from 20 to 34 seconds, thanks to some masterful blocking by the Omega Pharma Quick Step domestiques, who were on the front doing something all day. But attacks by Stijn Devolder and Filippo Pozzato on the final climb, the Tiegemberg, cut the gap down to a manageable 12 seconds, and the catch of Muravyev and Chavanel happened with 7km to go. Brilliant, valiant attack there, but the wide roads and pleasant weather made it too easy for the big group to close it down. The last 7km passed peacefully as the sprint became inevitable. OPQ's domestiques did great work all day, and they surely weren't going to let the finale get away from Boonen, who clearly had the legs for this one. Results: