Share All sharing options for: Gent-Wevelgem Is Still Awesome 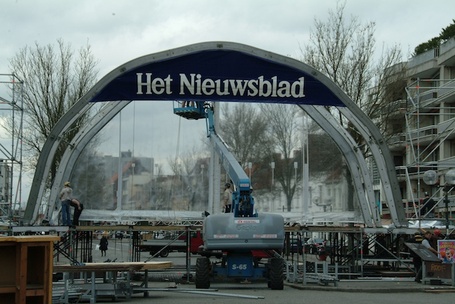 The other day I posted about how the long-running battle for pre-Ronde supremacy has basically been won by E3 Harelbeke, at the expense of Gent-Wevelgem. That's true, for reasons I went into there, pertaining only to which race serves as the key tuneup for the Tour of Flanders. But that was in no way a criticism of Gent-Wevelgem. It's not better or worse than E3... it's different. Gent-Wevelgem is essentially the Tour of West Flanders.

West Flanders is flat, not particularly covered in cobblestones, and full of open spaces for the wind to bore in on you and any excess surface area on your front wheel. Gent-Wevelgem starts in Deinze, spends about 10km in East Flanders, then essentially conducts a tour of West Flanders. It hits the coast, from Oostende to De Panne. It skirts around Ypres en route to Kemmel. It detours into France, connecting with Cassel in French Flanders. It does its thing around the Kemmelberg and Monteberg. But it never engages with the elements of the Tour of Flanders.

What I love about Gent-Wevelgem is that it's not a Ronde van Vlaanderen tuneup. Variety is good, and anyway that box has been checked a couple times before the gun goes off in Deinze. GW is called the sprinters' cobbled classic, because it has a few cobbles and we don't feel like creating its own category, and because sprinters have a chance of winning. That's one scenario. The beauty of the race, however, is the multitude of winning scenarios.

Wind and rain can be brutal in the run out to the coast. Prevailing winds come from the west, and the race turns straight into them, then across them, until reaching Cassel, 137km into the race. In 2009, for example, the peloton was shattered by weather in the first hour, eliminating everyone not in the 30-rider breakaway from contention. On days like this, Gent-Wevelgem is purely a matter of survival.

Other years though, the wind and the resulting echelons may sap some energy but won't necessarily shape the race. In those years it's up to the late climbs to sort things out. The organizers keep adding more distance and more climbs in the hopes of stringing out the field, as the succeeded in doing in 2010. Of the 11 climbs, nine happen in the space of 40km, including two ascents of the Kemmelberg. In typical, less brutal conditions, this spate of climbs invites attacks by the regular classics guys, and if the sprinters are inattentive or not properly organized, the race gets away.

Two years ago they stayed away, with Bernie Eisel outsprinting a quartet of Sep, Gilbert and Hincapie, the result of an awesome combination of attacks, monkey business, and Matti Breschel mechanical issues. Last year Quick Step held things together for their captain Boonen, who made the best of being ordered off E3 by winning the sprint over Tyler Farrar.

This year there will be HUGE motivation on the part of the sprinters' teams. The weather couldn't be nicer, so the chances of eliminating Cavendish and the like early on should be nil. Having Cavendish as the elephant in the room might sound like the race will be on lockdown, but in reality it makes for a fascinating final hour. Cav is such a force that even his rival sprinters will be desperate to get rid of him before the finale, rather than a normal sprintfest where everyone agrees to stick together and take their chances in the last 200 meters. After his poor performance in Milano-Sanremo his rivals will be out for blood on the Kemmelberg and other climbs. If enough of them make moves, it could definitely work.

Sprinters like Freire and Goss have clearly shown their ability to handle short climbs, along with classics-types who can sorta sprint, like Breschel and Gilbert. Farrar and Greipel aren't quite in Freire's class on the hellingen, but they're much more likely to get through than Cavendish. So a modest attack can drop Cav but still keep all of these guys -- and their teams -- in contention.

How many teams does it take to drop Cav? The answer is, a lot. Because the descent off the Kemmelberg, while being kind of a nightmare (at least in the past), prevents the uphill gap from extending much. Got 10 seconds at the top of the Kemmelberg? Don't expect to have it by the time you're pointing the front wheel for Wevelgem. I've never... no, I can't say it. Oh hell, I'll just say it: I've never ridden the Kemmelberg. OK? Happy now? So I don't know how awful it is to descend. I just know that for some reason these guys get down it pretty quickly since it was patched up four years ago. And I do know from extensive experience that if you're a bigger rider who lets out a gap on a short hill, it doesn't take much to close it up coming down.

Get thirty seconds on Cavendish at the top? Sure, you'll start the run for the line with a gap, assuming the Monteberg doesn't change anything (this year it comes right after the Kemmelberg). Want to keep your advantage to Wevelgem? Get a big enough group. On a day where there's no tailwind to Wevelgem, a small, elite breakaway will not hold off Sky's incessant beaters. That breakaway needs a lot of buy-in. It needs Quick Step and Katusha and Garmin and BMC and Lotto-Belisol. It needs some combination of power riders who won't mess around, like we saw in Milano-Sanremo after Le Manie. Because in nice weather, you're probably choosing between a big sprint and a medium-sized one.

Yep, I may not love this for the same reasons as E3, but I defo love this race.