Last year Tom Boonen had to forego his E3-prijs in favour of Gent-Wevelgem, because a slumping Quick-Step needed the WorldTour points to give them a slightly better team car position ahead of RVV and PR. This didn't make Tom particularly happy, but he went to Gent anyway. And he won. In a sprint, beating Bennati and and Farrar.

Gent-Wevelgem is often won in a sprint. Point in case: Mario Cipollini is one of four recordholders here, with three wins each (Merckx, Van Looy and Van Eenaeme are the other three). Sure, there are hellingen along the way, but the final one, the Monteberg, is 32km from the finish line. So while Friday's E3-prijs is genuinely preferred for some last minute RVV-finetuning, Sunday's race is a lot more sprinter friendly. That doesn't necessarily mean it will be boring though, oh no. Friday's race ended in a sprint, and that was the best day of cycling I've seen in a long, long while. Possibly since last year's RVV.

So who will win? Let's find out, below the fold. 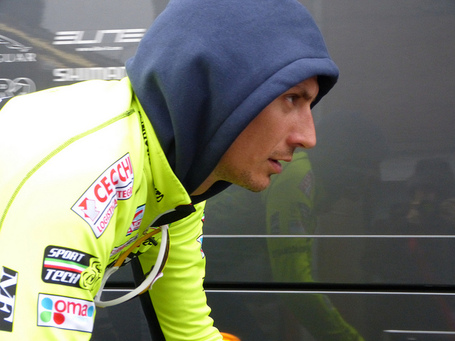 Pros: He's a Tom Boonen in winning form. He feels great. He looks great. He is great.

Cons: He already threw down the hammer on Friday, and doesn't always race to win. Winning this Sunday isn't important, winning the two Sundays after that is. But when he doesn't race for himself he does often help someone else on his team get a win. With Chicchi, Steegmans and Ciolek the OPQS line-up isn't exactly lacking in sprinters either.

Subconscious prediction: he'll be at the front of the peloton trying to bring the break back, and then he'll drop back down the peloton. No use risking a sprint-crash the week before Holy Week. OPQS will try to win with Chicchi.

Pros: he knows this race, knows how it works and how it's raced. Sure, he's only raced it twice, but he got a 9th and a 3rd place, which isn't shabby. Farrar lives in Gent (or Ghent if you like more consonants in your toponyms), so he's fairly familiar with the roads. Plus, there's no Sep Vanmarcke on Garmin's team to steal his American thunder.

Cons: He hasn't been setting the world on fire much so far this year. He's never been a multi year-long winnar, but being outsprinted by such impressive names as Alexei Tsatevich and Saïd Haddou isn't really awe-inspiring.

Pros: He's Mark Cavendish. And his minder Bernard Eisel is in great shape.

Cons: His minder is probably in better shape than he who he is supposed to be protecting. Having an off day can happen to anyone, but proclaiming yourself the big favourite and then ending up being the worst rider in the peloton on Le Manie, that's just fairly ridiculous. His super talented (or so people keep telling me) wingman Boss Hog isn't in great shape either.

Subconscious prediction: He'll blow up and get dropped in the hellingen, and then blame it on that guy by the side of the road who looked at him funny. But he'll be back winning by five bike lengths by the time we get to TdF and Olympics.

Pros: MSR must've given the de facto Aussie national team a boost of confidence. On top of Simon Gerrans actually winning it, Goss' own performance there wasn't too bad either.

Cons: he's only ever once gotten a cobbled classics result worth mentioning: 3rd in the 2009... Gent-Wevelgem... 53" behind Boss Hog and Kuschynski. I don't really remember that edition, to be honest.

Cons: In E3 he had a shit day with lots of unluck. The day after there was pain pain. Dam crash meant that even sleep you bad, and when he woke up he felt like a truck ran over him.

Pros: Swiss bears, like most wild animals, are twice as dangerous when wounded, and Fabs definitely haveth the anger in the belly now.

Cons: Like Tombo, he sometimes takes the second day of a two-race prep weekend off.

Subconscious prediction: He'll test the legs on the early hellingen and that's it. RadioShack will put their money on Bennati and Gallopin, who are both in excellent shape.

Pros: The magic marker with the super-healing collarbones is looking good. Point in case: he even attacked on Friday! I know, I fell off my couch too. Plus, with Kevin Hulsmans and Oscar Gatto he actually has good helpers with him.

Cons: The final hill being 32km from the line is maybe too far?

Pros: He started the year flying, with five wins before the Euro season got under way.

Cons: Since the Euro season has gotten under way, the winning has stopped. With Jurgen Roelandts out Lotto have lost a very important classics pion, and they doesn't exactly have the depth of field to just make up for one man going missing.

Pros: If he's there, he'll try to win, and if he tries to win, he usually gets close. His second place sprint in E3 showed he's in great shape.

Cons: Even whe's there, he's sometimes not really there.

Subconscious prediction: he won't remember that he's there. But Galimz will.

Pros: John Kittel is actually two people, Marcel Kittel and John Degenkolb, which is always better than just one person. Also, one of them is on the same level as Sep, apparently ;)

Cons: They're young. Like, real young. And that means that mistakes come often and easily. It's how they learn, right?

Pros: Petacchi is ill, which is awesome because it means Lampre won't be distracted by trying to get their fading star a result. And dislike him as much as you will, Hondo has the experience to help my boy Bole if need be.

Cons: He's fast, but he's not faster than Cav. And GW may not be hard enough to drop everyone faster than him. Also, Grega better hope forgetful Freire shows up, cause an awake Freire does pretty much the same as Grega, but better.

Pros: He's a TSV graduate. Hey, that's a huge pro in my book.

Cons: He went down in MSR, and he went down in Dwars. The Dwars crash was apparently pretty bad, bad enough for Boeckmans to DNF. He'll start, but how much the crash'll still bother him is pretty much unknown. If he's still hurting too much, Vacansoleil will have to shift focus to Marcato, who isn't slow either, or guys like Lieuwe Westra if they're in the mood to do their crazy attaaaaaaaaaaack! thing.

Pros: arguably the most talented new kid on the block, if you can still call him new. His devil horned first lieutenant Daniel Oss is really rocking - see what I did there? - too at the moment.

Cons: as far as cobbled classics go, Sagan hasn't shown all that much. Yet, perhaps. Sure, you see his face and you hear his name - partly cause Michel Wuyts really likes to shout it - but in the results department there are no trophies yet. Of course, there's a first time for everything, and the time might be now... This con isn't turning out to be very con, is it? 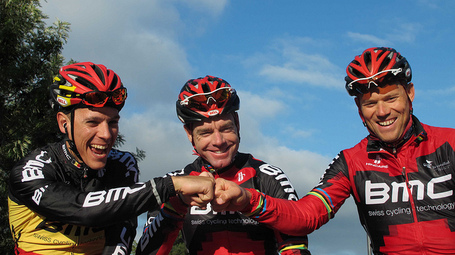 Cons: I don't buy that he's sandbagging. The Gilbert I know races at the front and races hard, if he can. He impresses, he scares his competition and he dominates. If he can. I believe that he has way too much honour and competition in him to ride at the back of the peloton and DNF, if he can prevent it at least. Sandbagging? Nope. Just out of shape.

Subconscious prediction: Phil won't feature. Again. And we'll know, cause the camera's are on him for like 1/2 of the total tv time. BMC will have to think really hard to find a plan B, but I somehow think they'll manage (for the record, BMC line-up: PhilGil, Ballan, Blythe, Burghardt, Hincapie, Phinney, GVA, Thor). Still. OPQS - 22 wins. BMC - 1 win.

Pros: He was once really good at this kind of stuff. Like seriously, I-might-demand-leadership-next-to-Cance kind of good.

Cons: And then he went to Rabo. Kidding! Just kidding! Then, his achilles actually became his achilles' heel, which I always think is wonderfully ironic, not in the way that I'm amused by his pain but that I quite like the symmetry of an achilles achilles heel.

Pros: He seems healthy again. And in theory he has a really great support team with guys like Tankink and Boom, and the heaps of experience of Paul Martens. And he can totally get out of having to do any work if he gets in a break if he says "sorry guys, we wanna sprint with Renshaw today. yeps, that's the plan for us!" Whether or not it actually makes sense to pick Renshaw over Breschel in GW is another debate, but it's a credibly enough explanation to do fuck all in a break.

Other random contenders for fourth place

Yauheni Hutarovich (FdJ), or however you want to spell his name. Leonardo - I don't do drugs Pigeons, I swear! - Duque (Cofidis). Kristof Goddaert (see my E3 rant). Jose Joquain Rojas Gil (I will never understand how Spanish names work).

- I'm very pleased to see Dries Devenyns back on the startlist after his PN crash, and hope he's fully fit for the Ardennes classics.

- Could Aidis Kruopis please get some points here?

- Question: is there any type of race where Thomas Voeckler doesn't show up?

- It's now past 4am. My sleep schedule is so messed up.

Full startlist here (that's a pdf file, should you care).