Share All sharing options for: Boonen Again! Tombo Joins the Greats in Wevelgem 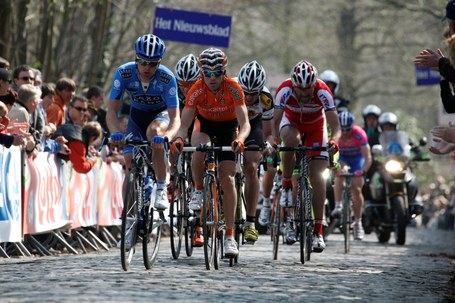 Tom Boonen of Omega Pharma Quick Step scored his second major classic victory in three days with yet another great team effort and another sprint to take his third career victory in Gent-Wevelgem today. Boonen launched himself with 200 meters to go from a 20+-rider leading break, powering straight up the center line to outkick Peter Sagan of Liquigas by a bike length. Matti Breschel of Rabobank took the third podium place.

Boonen's win was his second historical effort of the week. On Friday he became the winningest rider in E3 history with his fifth win; today he joined the winningest riders in Gent-Wevelgem history, one of five riders to win three times. Once again he had his team to thank, as they kept him in position even with their other sprinter Francesco Chicchi dropping out. Most of all, when the race split up, OPQS made it stick.

It was gruppo compatto, minus a small break, nearly all day coming into the second passing of the Kemmelberg, and Sky had Mark Cavendish near the front of the race when the action began. Two remaining riders from the early break, Anders Lund of Saxo Bank and Jon Izagirre of Euskaltel, began the Kemmelberg with 2.50 on the pack and were still away after a relatively calm passing of the race's biggest obstacle took place.

Fabian Cancellara countered a brief move by Matti Breschel and sped away from the peloton on the flat roads after the final hill, the Monteberg, taking Peter Sagan and a handful of other non-favorites with him. They couldn't quite stay away, but behind them the peloton split in two and Cavendish was on the losing end. About 25 riders formed the first chase of the two leaders, with Quick Step driving things once they collected Cancellara. Behind, Cavendish waited for a larger group to catch on and put his Sky beaters on the front. The split was 25 seconds as they passed under the 20km to go banner. Farrar, Boonen, Boasson Hagen, Gatto, Sagan, Oss, Freire, Goss and Bennati were among the sprinters who stayed up front, along with the big classics names like Cancellara, Breschel and Ballan, making for a lot of mettle in the lead effort. By 17km the advantage pushed out to over 30 seconds and the two leaders were caught with 16km to go. By the 14km mark, the gap was 49 seconds and the game was up.

With 12km to go, fate again struck the Radio Shack-Nissan-Trek team as their sprinter Bennati suffered a flat. Tony Gallopin was on hand to lend a wheel but it was up to the team car to tow Benna back in range. Katusha seized the advantage and took up the tempo as the race thundered toward Wevelgem. Bennati rejoined with 8km to go. From there it was just a matter of time til the sprint wound itself up.

Behind them Cavendish made a solo dig, a move that only underscored what a bad day he was having. His fellow sprinters seemed to handle the split, making the World Champion's inattention look that much worse. He will have his revenge in the Scheldeprijs, but this is the bigger target for the fastmen, and the greatest sprinter saw his serve broken.