If you know anything about women's cycling, you might be forgiven for thinking "Marianne Vos, she's won everything!" - but surprisingly enough, there are still some races where she hasn't graced the top step - Flanders, for instance! But it won't be easy for her to change that this Sunday - ask any of the women's riders which race they'd really love to win, and unless you're talking to one of the tiny skinny climbing types, there's one common answer - Ronde van Vlaanderen!

It's not surprising - it's a killer race, tough as hell, with everything you'd expect - cobbles, hills, and the exhilarating atmosphere when the men's and women's courses intersect. I'll tell you all about the parcours below the jump, and later in the week, who to watch out for in this race. But first, here's how last year's race played out - or, if you prefer it in English, fast forward to 13:46 on the David Harmon-narrated version

Of course, that's the old course - this year we're in a loop starting and finishing in Oudenaarde. The course is pretty different from the men's race. You know how the men's race looks like it's been created by giving a toddler a crayon and a map? (and that's a GOOD thing!) - well the women's is easier to follow. Here, I'll show you.

The men's race is 255km, and looks like this - starting in Brugge and going through Roeselare, before hitting Oudenaarde and spaghetti-ing all around the area. The women's race is simpler - 127km, starting in Oudenaarde, missing that first stretch, and some of the climbs like the Koppenberg (boo!) but they do share some aspects of the route.

So that's the seven climbs in 62km, and then after the final descent, a flat 12km run-in back to Oudenaarde. Or just look at it on the race maps: 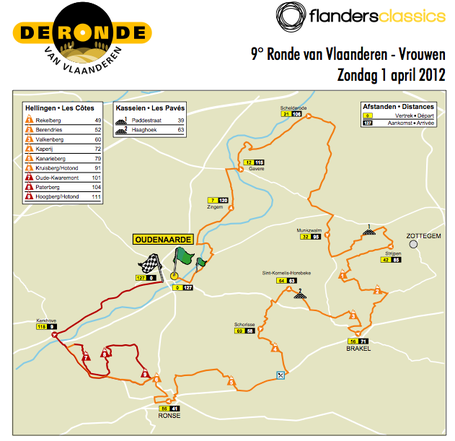 tl;dr? It's hard as hell, with lots of climbs, and craziness!

According to the race timetable, the women will start at 10:30 am (half an hour after the men start in Brugge), and are due to finish between 13:46 and 13:56, just before the men pass through Oudenaarde for the third time.

As with the men's race, it's a new course this year, and while they've ridden the northerly part before, the southern part, around Ronse, is new to the race. I can't reiterate enough, everyone will want this race - it's part of cycling mythology, it's one of the few chances to cycle in front of these huge, passionate, insane crowds, and it's the third round of the Road World Cup!

To follow the race, the best bet will be listening out for updates during the men's race, and via twitter - I recommend Dolamns-Boels mechanic Richard Steege, Hitec Products-Mistral Homes manager Karl Lima and Specialized-lululemon soigneur Beth Duryea - all three deserve a medal for how they hep us to follow races!

You can see the startlist here, and later on in the week, I'll tell you a bit more about which riders to watch out for - but in the meantime, anything more we find out about the course - including riders' views on it, as they get their pre-rides in - will be added to the comments!