Share All sharing options for: Hincapie's Ronde Record Would Cement His Legacy 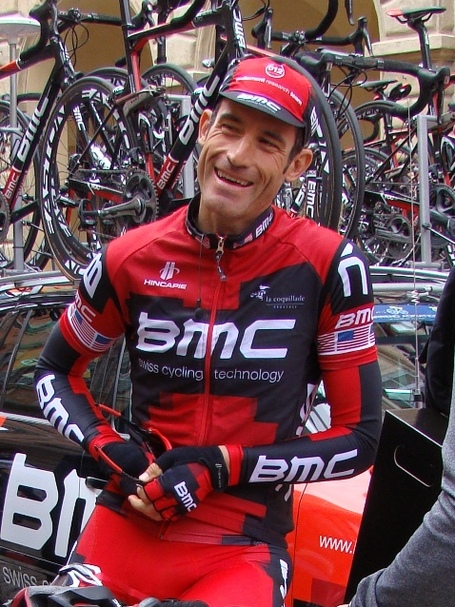 Barring any misfortune (knock knock) George Hincapie will take part in and hopefully complete the Tour of Flanders for the 17th time in his career on Sunday. If he makes it to Oudenaarde he will surpass the record set by Alberic (Briek) Schotte for the most completions of de Ronde van Vlaanderen. And believe me, any time you are mentioned in a sentence with the words "Ronde" and "surpass Briek Schotte," it's a big, big deal.

This accomplishment, if it happens, will be the cherry on top of a truly outstanding career on the cobbles. By any measure Hincapie is the greatest classics rider in American history. He is the only American ever to grace the podium of de Ronde (3rd in 2006) as well as the sole American podium finisher in Paris-Roubaix (2nd in 2005). His win in Gent-Wevelgem in 2001, outsprinting a five-man break including Leon Van Bon and Steffen Wesemann, ranks as the greatest spring classics victory by an American rider, save perhaps for Lance Armstrong's lone victory in La Fleche Wallonne. [Or I suppose Tyler Hamilton's Liege-Bastogne-Liege, but let's not go there.]

Hincapie ranks as one of the sport's all-time great grinders. Schotte started a record 19 Rondes, finishing 16, and is considered the personification of the race. Hincapie now stands tied with Schotte at 16 finishes, followed by Frederic Guesdon at 15, then Adrie Van der Poel. Hincapie is also on course, with luck, to set the record for Tour de France appearances, also 17, which would put him ahead of Joop Zoetemelk, and five other riders one further behind. George already owns the record for most consecutive finishes, 15, which he'll be looking to extend as well. No single rider appears near the top of both of these lists. George is about to be #1 in both. That's not just perseverance; that's mind-blowing.

In neither case is that "participation" record misleading. True, he never won either the Tour or de Ronde (yet), unlike both of the men he's set to pass, and his legacy includes an element of "almost." But he was hardly a tourist in either France or Belgium, riding both with great distinction. Tour de France finishes alone speak volumes, but Hincapie is credited with four Tour stage wins (3 TTTs and his famous mountains gallop in 2005) as well as being an utterly invaluable summer teammate during the Lance era and for his two subsequent HTC and BMC squads.

Meanwhile, in Flanders his record of finishes is littered with top tens -- seven to be precise -- including three top fives and one podium. He came closer at Paris-Roubaix, second in 2005, and he's racked up 13 finishes in 15 starts so far there. But if Hincapie once chose the Hell of the North as his top prize, it's arguable that Flanders has always been his best chance for the ultimate classics glory. He stays in contention, even to this day, and the luck that has taken away a few shots at the Big Cobble in France has been far kinder in Flanders.

For my money, what Hincapie really represents is an American Flandrien, or certainly the closest we've come to having one so far. Whether he makes the cut is for people to argue endlessly; there is no denying his lack of wins, and at least in the time I've been scrutinizing these races, a period coinciding with the careers of Boonen and Cancellara, he hasn't ever been the single strongest guy in the race. But he's always in the next cut. Moreover, he does something so few of our boys have learned to do, which is race like a native. No, he isn't super-aggressively attacking the front of the race, he is probably a bit more calculating than your prototypical Belgian. But his positioning and instincts for the cobbled classics, an attribute that Americans have long struggled to develop, are up there with the top locals. He knows the roads, he excels at the endless corners and changes of pace in Flanders. He races from the very front. He's even become a sought-after teammate, by sprinters and cobbles youngsters alike, and his ability to tow Mark Cavendish into contention during his HTC days was legend.

This tactical sense is what keeps him a threat to win Flanders even to this day. No, I'm not saying he's a favorite; it's too easy to look at his age and track record and say "no way." But after finishing sixth last year he's in with a shout. The argument for Big George in 2012 rests on two bits of evidence: last year's performance and this year's team situation. On the latter, he was slated to ride in support of Philippe Gilbert, with the idea that if he's up front in the final 10k then anything can happen. Now, with Gilbert starting in questionable condition, Hincapie's responsibility to look after someone else is maybe not so certain. Maybe the decision to free him to ride for himself comes a little earlier in the race, if not the night before. Yeah, I know, teams with several threats always just say all options are on the table and we'll see how the race goes. But as long as Gilbert was going well, nobody was riding for George.

Then there's last year... arguably as good a shot as he's ever had to win. Five seconds behind the winner is his narrowest margin of defeat in his 16 tries. Moreover, if you think about how he can win, it basically comes down to sprinting from a small group, ideally with some avantage, like a leadout. He's not as fast as Boonen, but he'd have a chance, as opposed to going on a solo attack, which we've never seen him do that I can recall. Well, last year was the first time in all those years that Hincapie found himself looking at a sprint for the win. He had Ballan setting him up for just that small bunch, and if the race hadn't splintered slightly in the last 3km that's exactly what would have occurred. Sure, the guy is 38 and his Paris-Roubaix results seem to be going downhill, but to dismiss him as a non-contender on those bases, ignoring how close he came to winning last year, seems ludicrous.

Hopefully the steady stream of Americans "discovering" the classics will produce some big winners before too long, but even if/when that happens, we may still never see another George Hincapie. Trailblazer, grinder, tactician -- his impact on American cycling and particularly Americans in the Classics will last a long, long time.