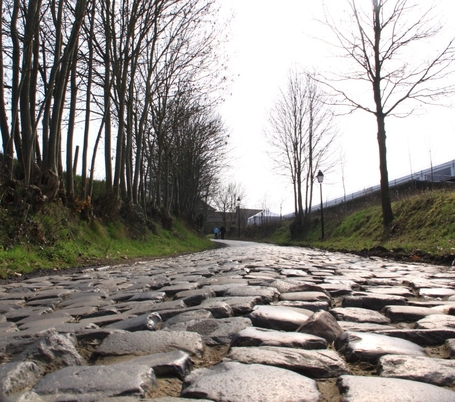 No topic has been as hotly debated in the off-season as the total revamping of the Ronde van Vlaanderen parcours. Cries of outrage over the exclusion of the climax-point of the race in recent history, the Muur in Geraardsbergen have been ringing all winter and show no signs of going away. But lets ignore the politics for the moment and focus on the facts of this years race.

The main change is the fact that Oudenaarde sought and were awarded the honor of hosting the race finish. Being situated right in the center of the flemish ardennes, to the west of the old finish in Ninove, the finale of the race naturally moved to the cluster of hellingen south of Oudenaarde. These hills have always been at the heart of the race and now their importance has increased even more as they lie closer to the finish.

Most comments on the new course have focused on it being much more brutal than in previous years, mainly because of the triple passes over the Kwaremont & Paterberg but how big is the change really? On the macro level the difference isn't huge. This year is 256.9km compared to 256.3 in 2011. The number of climbs is down from 18 to 16 this year. Listed cobble-sections are the same number and the dreaded Haaghoek is out this year. They hit the first climb after 70 kms last year, this year it comes after 109kms. From the last climb to the finish there are 13kms of flat compared to 12. All in all, on the surface the differences seem negligible. So what happens when you look closer?

The first thing you notice is that they have trimmed some of the fat. There are fewer climbs but the race is thrown headfirst into the tough Taaienberg/Eikenberg/Molenberg triple leading into a more mellow intermezzo of climbs before the finale. Just as usual the Oude Kwaremont should signal the start of the real hostilities and likewise the Koppenberg is placed similarly and in the case of poor weather it could be a race-splitting climb.
Then at the decisive end of the race some of the less taxing (and un-cobbled) climbs have been taken out of the finale, Leberg, Valkenberg and Tenbosse are all paved and not the most selective. Bosberg was defined mostly by it's place nearest the finish but as Gilbert demonstrated last year, even there it wasn't tough enough to make for a very good launchpad for late attacks.The race has been won there, most famously by van Hooydonck but that was many moons ago. So, before there were two really fierce climbs after 200 km, Molenberg and Muur-Kapelmuur. This weekend we will have 2xKwaremont, 2xPaterberg plus the Kruisberg and Hoogberg. Granted the last two aren't cobbled, nor are they supersteep, but they are long, very long. Leberg,Valkenberg,Tenbosse were 950+540+450 meters. Kluisberg/Hoogberg are 2500+3000 meters. Add to that the Oude Kwaremont which is 2200m with 1500m of jagged, lumpy, soul-sucking cobbles. That is a shit-ton of leg-sapping and attack-inviting climbing, all after the point where most races have already finished.
Another significant factor is the condensation of the finale. There will be roughly one hour more of racing before the riders hit the categorized climbs but once they do enter that zone the hits will come relentlessly and there will be very little time for recovery. One feature that we are used to seeing is the opening and closing of gaps. Groups will lose contact on a climb but as the action settles at the front there is an opportunity for riders to re-connect and the race to come back together. This will be much harder this year and with that comes an even more increased importance of positioning. Going into any climb after Kwaremont further back that 10-15th place will potentially be a mistake that you cannot recover from. The natural effect of that is that team-helpers will be that much more vital.
So what does it all mean? Is the race fundamentally altered? Certainly not. The difference lies in degrees of difficulty not in the fundamental nature of the course. It probably will affect the chances of certain riders, for instance it is hard to see the sprintier riders surviving both the longer,heavy climbing and the three ascents of the Paterberg close enough to the front to make the podium. Riders like Farrar, Eisel and Goss won't be making it to the end like they might have in the past. On the other hand, the balance of power between the real top cobble-riders shouldn't change dramatically. The man on form will still be in contention whether on the new course or old, nothing in the coursedesign should alter that. What could be racedeciding is the teamfactor. The rider on the stronger team should have more of an advantage on this course than on the old one. On sunday we'll see.