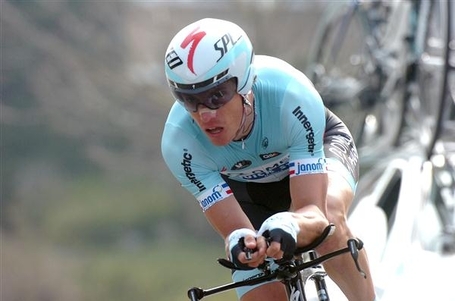 Sylvain Chavanel continued Omega Pharma-Quick Step's hot hand today, winning the time trial in Driedaagse de Panne, vaulting him to the overall win. After Katusha's Alexander Kristoff took the morning sprint win Chava lay 12" off the overall lead heading into the afternoon's final crono. Chavanel beat Lieuw Westra of Vacansoleil by four seconds for the stage win, and nobody else was within 17". Kristoff himself lost over a minute on the stage. Westra's performance gave him second overall, with Maciek Bodnar third at 14". Chavanel's performance was a demonstration of good form headed into the Tour of Flanders, and while recent editions of Driedaagse have been short on overall contenders, past winners David Millar, Alessandro Ballan and Leif Hoste all went on to perform quite well in Vlaanderens mooiste. Results: