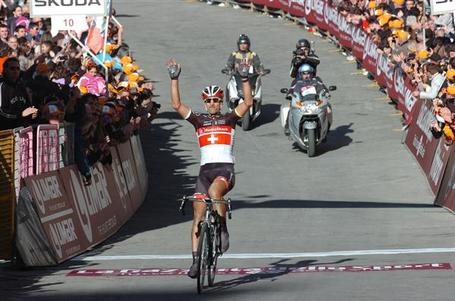 Yesterday we concluded that the finish of Strade Bianche - a steep climb to the square in the center in Sienna - traded competitiveness for spectacle. The sight of dust-covered riders - looking almost like ghosts - emerging from the cobbled streets that wind circuitously through the buildings on the climb to the hilltop was enough to offset how the climb restricted potential winners. The final kilometers were muted as aggression there would be likely met by an implosion on the climb. Advantage Gilbert, disadvantage Cancellara.

Today we were reminded that races do not always play out how we expect them to. The dramatic final kilometer does not dissuade the swaggeringly confident. And so Fabian Cancellara attacked 12.5 kilometers out, on the final dirt climb, to try his hand at a solo escapade into Piazza del Campo.

The Radioshack Nissan Trek boys meant business early on, though perhaps everyone else in the peleton failed to read the signs. Daniele Bennati was solo for the final portion of the race, looking surprisingly quick, if not nimble, up the innumerable climbs that kicked to over 15%.

Behind, everyone looked to BMC. Gilbert, mostly. Especially because he had Van Avermaet and Ballan for company. It seems being a former winner garners you all kind of attention, though you wouldn't know it by how anonymously Maxim Iglinsky rode in the same group with his teammate Kreuzinger for company.

You could be forgiven for not noticing any of these riders. The RAI announcers were determined to paint the race as a three-horse race between Nibali, Visconti, and Oscar Gatto. 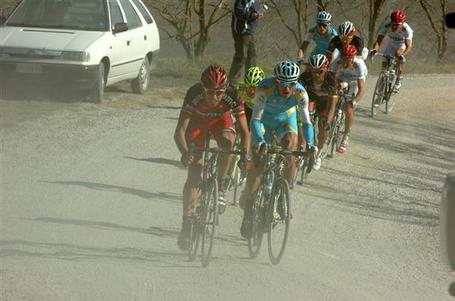 The leaders kick up dust.

That would not last for long.

With 13 kilometers to go, on the final dirt section, Greg van Avermaet attacked. His teammate Gilbert dispatched in the last round of aggression, he tried to assert himself as equally deserving of attention.

Behind, a moment of confusion. Then Cancellara emerged from the group, Iglinsky in tow, and rapidly cut down the distance to the leading BMC rider. Over the top of the final dirt climb, Cancellara was now in the lead by a scant 3 meters. Surely things would come back together, right?

Many tall beings have fallen victim to that belief before. Paris Roubaix 2010. E3 2011. You never give Spartacus an inch, because he'll take a mile.

And thus the pursuit began. Initially the gap was small - 8 seconds, perhaps - and the probability that things would come back together seemed high. The chasing group had been reduced to Iglinsky, Kreuzinger, Van Avermaet, Ballan, and Gatto. 2 Astanas, 2 BMC, 1 Farnese-Vini. Surely they could at least control the gap until the final climb, when the leaders of the larger teams could leap away and catch the fading Swiss rider?

Incredulously, the gap began to grow. 10 seconds. 18 seconds. 22 seconds. Cancellara was aided by some deft bike handling on the twisty descents into Sienna, almost coming a cropper as he narrowly avoided the stone walls and curbs around him. Our leader seemed much less phased by these close encounters than his chasers.

And then there were 4 chasers. In a moment of inattention, Ballan kept turning in a roundabout instead of exiting. Maybe the chasers waited, maybe he was just strong enough to get back on. Either way, we had five riders again shortly afterwards. But there was dissension in the ranks, pulls became shorter and people started looking at each other instead of the red, white, and black dot bobbing along in front of them. The gap grew.

52 seconds now, 2 kilometers to race. 1 kilometer, and Cancellara was climbing the wall into the city center, not the slightest hint of a grimace on his face. If there had been, it surely would have disappeared as he coasted the final 150m across the finish line, arms outstretched and no one else in sight.

Behind, Iglinsky and Gatto dueled going into the final corner. Gatto looked to have the advantage and the inside line, but his bike tried to squirm out from underneath him. By the time he had wrestled it back into control, Iglinsky had the advantage.

Photos by Sirotti, all rights reserved