A closer look at the OPQS RVV line-up

Share All sharing options for: A closer look at the OPQS RVV line-up

With twenty-three victories under their lycra belts so far, Omega Pharma-Quick Step is definitely the team of the year so far. And by winning all the races of De Vlaamse Wielerweek so far (Dwars: Terpstra, E3: Tombo, GW: Tombo, Driedaagse: Chava) they have got to be the most feared team for Sunday's RVV. Their final line-up has been published as Tom Boonen, Sylvain Chavanel, Niki Terpstra, Dries Devenyns, Nikolas Maes, Gert Steegmans, Matteo Trentin and Stijn Vandenbergh. But who are these guys, really? 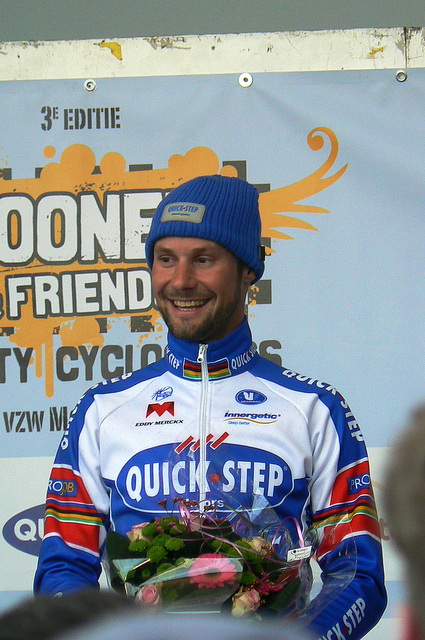 Really? You don't need me to explain who Tombo is, right? The now 32-year old (I can't believe he's 32 years old) started his career in the pro peloton not at TSV, not at Lotto, not at QST, but at... US Postal. For one year, he was on the same team as Lance Armstrong, Floyd Llandis and George Hincapie. He arrived on the scene super style: with a third place in a really, really great edition of PR (dirty faces, Hincapie falling over, the discovery of Tombo, Museeuw's two times five is ten... <- awesomesauce). The rest of the story is well known: three Roubaixs, two RVVs, one world champ title and a green jersey). 2010 and 2011 were marred by bad luck, crashes, shit form and other different kinds of unluck. But now he's back, with more wins this season than the previous two together.

Is there anyone in the world who doesn't like Chava? Races aggressively but not dumb, is all smiles all the time, works for his team despite wearing the French national stripes, and is active all year 'round. Seriously, this dude is awesome. As most Frenchies do, he started with some local teams: Bonjour, Brioches La Boulangère (loosely translated - the baker's danishes) and Cofidis; but in 2009 he hopped the border to QST. Who else felt really bad when he came second in RVV last year? Cause I felt really bad. I wanted him to win! Suffice to say he has what it takes to win. Plus, more hellingen this year is better for Chava, who climbs good enough to win Brabantse Pijl and TdF mountain stages.

Most remarkable fact about Nikki Terpstra? He's a Dutchie who's never ridden for Rabo, Vacan nor Skil. I know, wtf right? Instead he spent most of his time at a German team. Team Milram even. I know, wtf right? He is definitely no stranger to the Flemish cobbled classics (you remember Dwars, right?), and though I don't see him winning the other teams really should think twice about letting his break get too much time. He's the shadow man's shadow man at OPQS, and if you can have the Dwars-winner be your third card, that's pretty freaking aces.

Now we may be moving into more unfamiliar territory for some, but not for me. I've liked Devenyns for years. The man has a university degree (I like boys with brains) and knows how to fight. Off the bike, too. In 2007 he got a pro contract with Lotto. He started in Etoile de Bessèges, crashed and broke his arm. A month later he was back out training. He got hit by a van and spent a day in a coma. A build up of fluid in his brain, on both sides. No surgery possible. Just wait and hope. In 2008 he crashed and broke his arm, again. But things went better after that (PN crash and consequent shoulder fracture not included).

He's a bit of a jack of all trades (except for you know, real difficult climbing), our Dries. But he'll do cobbles, and Ardennes hills, and races like Lombardia and San Seb, and he'll usually attack while doing so, cause he loves to attack. He's like Philippe Gilbert in terms of what races he likes and is good at, really.

Nikolas Maes' previous team? Top. Sport. Vlaanderen! So yeah. Maes rocks. He's a sprinterlike type, really, but he's not afraid of a cobble or two and he's been a really, really great domestique so far this year. Really. Working hard, bringing back breaks, getting in the right echelons, doing his share. Plus, he has great angerstare. 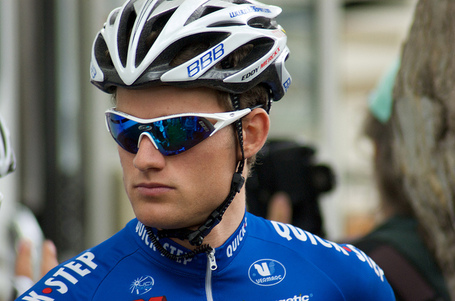 Fabian said he had unluck after E3. Fabian doesn't know what unluck is. You know who knows what unluck is? Me. Cause my upstairs neighbour is truly the shittiest guitarist in the world. Someone else who knows what unluck is, is Gert Steegmans. I mean, who else gets his own personal tornado? In the words of Dirk Demol: "Tree branches flew in the air and a second later Gert was lifted in the air too. He was blown away from the road and tumbled over and over many times. I've never seen such a thing in my life." I mean, that's just freaky. He spent half a year by the Russian sidelines out of principle. And in last year's Tour he crashed together with Boonen, and broke his wrist. Unluck I tell you. But he's a good rider, really. He'll be a workhorse, but one that ought to last a good while into the race.

How many neo's do you think there are in RVV this year? Not too many probably. That might be a cool thing to look up. I think I might look that up. Trentin is Italian (just in case the name didn't give it away) and 23 years old. But he has a top 5 in the U23 race on his palmares, which is a good indicator (I only recognize 6 guys out of the top 20 in that race though. I didn't know Demare did cobbles either). He showed up for Tombo's charity cross race too, and was actually not too bad at it, which is a huge plus in my book (if you click this link you will see me shamelessly plug my actual book). But mostly he's probably known for crashing in this year's MSR, where everyone thought he was Tombo for a while.

You cannot possibly not know Stijn Vandenbergh. I mean, the man is a giant. You could probably have two Dumoulins standing on top of each other in a comicbook-style trenchcoat moment, and they still wouldn't be able to steal Vandenbergh's helmet from the top of his head. I mean, look at this Cor Vos picture of Levi riding behind him. Doesn't that just crack you up? I'm a simple person. That's hilarious. He's not just tall though. He's a really hard worker too. He's the guy that's uninterruptedly at the front for the first 100+ kilometres.