Share All sharing options for: Pippo Gonna Bring It? 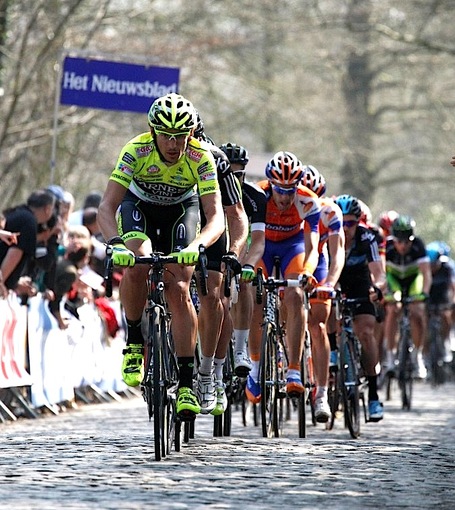 This is what I've been waiting about six years to hear. From an interview earlier this spring now posted at CN, Pippo takes responsibility for his missed chances and vows to be different this year.

That Pozzato marked Boonen out of contention speaks to Pippo's strength as well as Boonen's. If Boonen felt "marked," that's code for "threatened," as in "I'm certainly not pulling that guy up the road." Fans everywhere, especially in Belgium, crucified him for it, while Pozzato explained he was at his limit, isolated, and couldn't do more. I can't speak for Belgian fans, not by a long shot, but I have to wonder if a lot of their anger had to do with wanting someone of Pippo's class to race up to his ability, as opposed to just partisan concern for Boonen. Pippo the former Lefevere development project, protege to Boonen and Bettini, had a gift and he wasn't using it. Flemish fans -- not a monolith but generally known to appreciate foreigners who race the right way -- didn't like what they saw after Pippo left his Belgian team.

[You have to wonder how things would be different if he'd never left Quick Step. Moot question maybe, if you assume he had to leave, though Lefevere has often carried multiple captains. Anyway, no team races as rightly in Flanders as they have. You have to think he'd have been coached very, very differently all those years.]

Now, at long last, we get some insight. Pozzato sounds like he harbored a good deal of insecurity in those years as a leader, exacerbated by conflicts with Tchmil at Katusha and off-bike distractions. And now, having hit his low point, he is bouncing back. He sounds like a different guy -- no excuses, all responsibility. His actions betray a determination not seen in a long time. No fan of cycling can scoff at a guy who raced a week after breaking his collarbone, out of dedication to his new team and to the cause of righting his ship while he can. Pozzato hasn't exactly blown up the peloton, but he's taken a few digs as his form has come around. It sounds like he's peaking for Flanders. If he really is right in his mind, if he's really changed, that's just one more HUGE element in play tomorrow. No matter what you think of the guy, the race is better for having him up there, fighting with the giants.