Saturday March 3 2012. After a plane hop from SLC to SJC, a short bus ride and a train transfer, Jono Coulter of Vanderkitten-Focus picks me up and deposits me into the home of Katheryn Curi Mattis who is counting time. "Ladies 10 minutes. Bags, T's, makeup. Let's go. Ladies, 5 minutes." Jono vanishes into this swirl of activity and I stand out of the way as 12 women grab gear and head for cars.

I briefly meet Dave Verracchia the founder of the Vanderkitten label. I land in a fire engine red Volkswagon piloted by Jenn X Reither. Three cars rally off in caravan. Well sort of, we lost contact and had to chase back on. A little GPS and we had a win. This is my introduction to the 2012 Vanderkitten team camp. The ladies have been going at this for two days prior to my arrival in Santa Cruz, with gear fittings, team rides, meetings and such. Coulter has been to the airport, or train station repeatedly through out the week. From this point forward I will get an inside look at how the team prepares for the 2012 season, which they will officially kick off at the San Dimas Stage Race.

The team is a mix of Kiwi, Aussie, Swiss, US, and UK talent. The members are chosen for ability on the bike, their personalities in the peloton and to represent the Vanderkitten label which is aimed at women in active sports. "We're athletes on the bike, but we're girls who like to paint our nails too" quipped Reither at the introduction party. Don't allow the pretty faces and painted nails, yes they were painted, lull anyone into thinking these ladies aren't here to work. Over the next three days I witnessed a team building as Dave Verracchia and Jono Coulter, co-owners of the Vanderkitten-Focus franchise attempt to overcome the tumultuous end of the initial Vanderkitten three years ago. New to the squad this year, Kate Chilcott (New Zealand) ponders the array of choices presented by shoe sponsor Vittoria Focus Bicycles provides the Izalco Team 1.0 to Vanderkitten. The bikes are built with 3t cockpit, Shimano DA, TRP Brakes, Fulcrum wheels and Kenda rubber. The frameset features size specific tubing and a proprierary fork design. Not attempting to be lightest out there, just the best out there Focus strives to bring a well designed and build frameset to their riders. 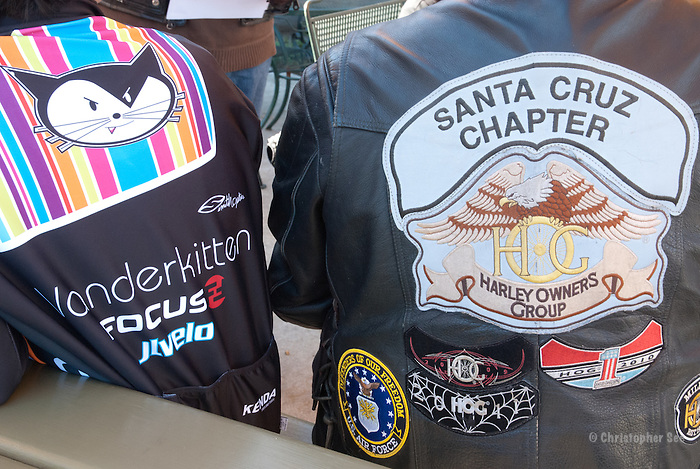 Emily Collins a past New Zealand U23 champion reflects on tea Ruth Winder, multiple US junior national champion on road and track. Originally from the UK, Winder moved to The States and began her career on a mountain bike. After coffee and some warm up miles it was business time. Team lead-out and sprint tactics as taught by road captains Mattis and Reither. Quiet roads around Watsonville provided the venue. Starla Teddergreen is looking to return to sprinting form this season. She underwent offseason surgery on her hip. Monday openers on the road to Aptos High School for a lunch rally in support of the high school mountain bike program. Courtney van Dimple (left) is a product of the Mariner athletic program. Courtney's younger sister Camisa takes it to Emily Collins in the mini crit series. Camisa was later DQ'd for improper propulsion of the bike. Pedals must be used no pushing. Kathleen Billington takes the hole shot! A former member of the Danbury Audi squad, east coaster Billington has already brought victory to the Vanderkitten stable this season by winning two stages and the overall at the Tour of Bahamas. Billington also races cyclocross. Courtney left her mark instead and soloed home the win. Following the event at Aptos High School it was back to work for the team. A four hour ride filled the remainder of the day light hours. The camp days were filled with rides, team building, eating, recovery, team meetings and more eating.

There are the members of the 2012 Vanderkitten-Focus racing team. An international flavored group under the leadership of former national champions Reither and Mattis. This is how Verracchia and Coulter enter into the third season of the rebuilding of Vanderkitten.