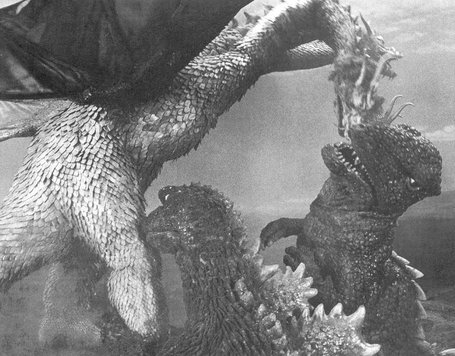 Every Classics season has a theme. At the beginning of the last decade, I suppose it was "what's next?" following the winding down of careers like Museeuw, Bartoli, Tafi and Mapei. When the answer came back "Tom Boonen" starting quietly in '03 and taking hold firmly by '05, the theme for the next several years was "can anyone stop Tom Boonen?" Answer? No, then yes, then his team... by which time the theme was "can anyone stop Quick Step?" Then "can anyone stop Cancellara?" You can sense a pattern here, yes?

This year it's something different, and far awesomer: a multilateral gathering of recent champions in their prime and on a path to excellent form. In struggling to come up with a metaphor, I started with the 1984 NBA playoffs, when you had the league's three most famous franchises, the Celtics, Lakers and Sixers, all stacked and reasonably fresh off championships. I tried the 2007 Champions League (don't nitpick me on soccer please), with strong squads from ManU, Chelsea, Liverpool, Barcelona, and Milan.

But even those examples fail. Stick and ball sports involve two teams at a time, and if there are other great teams out there, well, everybody doesn't play everybody. There is really only one way of putting the upcoming Classics season in its proper context... by looking at the biggest multilateral heavyweight battle in the history of the planet. Yes, I am talking about Destroy All Monsters!

[I'd settle for All Monsters Attack too, but let's stick with the prototype.]

Think about the parallels. With the start of the cycling season, contact with Monster Island -- where the great champions were penned up -- has been severed and the beasts unleashed. Godzilla has attacked and destroyed the Strade Bianche. Newcomer Gorosaurus has surprised everyone, including Mothra, by laying waste to the Omloop. Old favorite Rodan shrugged off KBK without breaking a sweat. Manda and Baragon, both presumably working for King Ghidora, have looked very strong and frisky (with teammate and former world champion Kumonga coming slowly into form). Countless other monsters (Minilla, Varan, etc...) have let it be known that they will be heard from. Apart from Anguirus, who cracked his hip in Paris-Nice, all of these guys are honing in on each other for the ultimate battle, with the Paterberg starring as Mt. Fuji. Is it gonna be epic?

What do you think?

But on almost any other team I'd be gushing about how interesting Greg Van Avermaet looked last year. I might even start reminiscing about Alessandro Ballan's 2007 magic. But no...

First Round Fisticuffs: No wins yet; two fourths and a fifth from Van Avermaet and Ballan in the Omloop and the Strade Bianche.

Ready To Brawl? Don't worry about these guys. Last year at this time Philippe Gilbert hadn't won... er, well, he opened his account with a win in the Strade Bianche, whereas this year it looked like Ballan and Van Avermaet were the protected guys while Phil-Gil bides his time. Anyway, it looks as though Gilbert's quiet start is actually the team's biggest concern. In other words, they have no real concerns.

Aside, why hasn't cycling come up with a name for the Van Avermaet job? The NFL, for example, is great at this: H-back, nickelback, rover, dozens of informal nicknames for certain jobs, all of which sound pretty cool. Van Avermaet has the most interesting job on BMC, way better than any football assignment, covering attacks and if everyone is sitting on Gilbert's wheel, launching his own move to see if anyone has the nerve to let him go. And yet this position needs has no flashy nickname. This has to change. Not decoy; decoys are something that gets shot at. Phantom? Flier? Dagger? Something.

As great as Philippe Gilbert is and as much as the new Ronde looks like his race, the fact remains Phil-Gil only projects to do stuff like what Fabian Cancellara has already done. There's only one elephant in this room so far.

Ready To Brawl? Here's a quick rundown of what we're looking at...

We'll see about that. Daniele Bennati looks like an awfully useful teammate at the moment, something Ballan can attest to from years gone by. One more note about Cancellara: he sounds slightly pissed off about what happened last year, when people ganged up on him. He is indeed, as he will tell you, strong in the head. Very strong. I think I just got a shiver down my spine.

Prior to that, had they put guys up the road, nobody would have taken them seriously -- they're just decoys. Now, Sep Vanmarcke is 23, growing ever more capable, and there is no big star he's absolutely, definitely working for. When he goes on the attack (as he did throughout E3 Prijs), letting him go is a LOT riskier.

Ready To Brawl? As discussed last week, Garmin got a huge shot in the arm from Vanmarcke's early win, and Sep has been sniffing around the business end of the race in Paris-Nice too. That's one win (and counting) in each of the last three classics seasons, not quite in the heavyweight class but a record most of their rivals must envy.

Not sure how much longer anyone can call them "underdogs," but still, expecting them to hold off Omega Pharma Quick Step for this spot in the poll is a pretty big ask. For now, they get the ranking on the basis of the last 20 meters of the Omloop, and before anyone (coughtgsgirlcough) can complain that it's silly to make this call based on 20 meters of racing, well, that's how they decide winners. And don't be shocked to see them still here in April. Van Summeren looks good, as does Haussler. Farrar will do his thing eventually, and Millar and Maaskant provide insurance. But they'd better be flying. When Cancellara grumbles about last year, who do you think he's thinking about?

Tom Boonen has almost never not been among the five strongest guys in the race every spring since 2004... Boonen hasn't lived up to the monstrous expectations in a few turns, but he remains perhaps the last guy you want to tow into the last km anywhere this spring.

First Round Fisticuffs: Boonen second in the Omloop, sprint win in Paris-Nice; Chicchi sprint win in West Vlaanderen; Ciolek with a rare win in Algarve.

Ready To Brawl? Always. Assuming Chavanel is as threatening as ever (a safe assumption after a solid Omloop and three clockwork years at QS), Boonen has the team he needs. Tommeke is also riding with a bit more spring in his step so far -- not that he'd lost it exactly, but there's reason to hope that we're seeing vintage 2008-09 Boonen, not the pressure-laden figure of the last two campaigns. A slight uptick could bump him back to the top of some podiums. And he'd better get to it. Sep is growing up faster than expected.

And if Mark Cavendish is anywhere to be seen in the finale, it's over.

Ready To Brawl? Ah, sure. Sky have been all over the road, towing Cav to one win and seemingly shepherding Wiggins to some sort of result in Paris-Nice. They're looking quite tidy, should make a great show of team strength at Gent-Wevelgem, and pretty much have the Scheldeprijs in their pocket already. But Boasson Hagen needs to resurface at Tirreno-Adriatico. I need a reminder of why this team is truly dangerous, and Flecha doesn't get me there. No disrespect, he's solid, but his record of dropping guys who can outsprint him isn't great.

Their top two guys, Marcato and Leukemans, are the usual suspects of the Cobbles finales, only they don't seem to ever win.

Ready To Brawl? I suppose. Their support guys are constantly making an impression: Westra, De Gendt... they don't sit still any longer than Hoogerland. Marcato seems fine, but the big story is that Leukemans was 11th in today's Paris-Nice stage. A week ago he was worrying if the flu was going to kill his preparation, but he's not only getting in those critical P-N miles, he's doing them with some aplomb. Maybe in a week we'll know if Devolder has anything to contribute. Just gravy at this point.

Ready To Brawl? What the what? How many 20-year-olds hang with the elite sprinters in the long cobbled races? The answer so far is, practically none. But Arnaud Demare has been the biggest surprise this side of Sep. Can they cobble together enough muscle to hang with the big guns in Flanders? Probably not. Chainel seems to be unwell, Offredo a maybe, and Guesdon will be inviting Longo comparisons soon if he keeps it up. But Nokere-Koerse and the Scheldeprijs would be major, and realistic, hopes.

Breschel is a massive talent, and while the responsible thing to say here is all about injuries and uncertainty, I can't shake the memory of him in 2010, looking very much like the next big, big thing.

Ready To Brawl? Good question. Nothing ever comes as easy to Rabo as you expect, and their quiet start is hardly good news. But I'm not panicking yet, after stacking my FSA DS team with Dutch riders again. Boom rode decently in the Omloop and Breschel showed that he had his old instincts, if not quite his old legs. That last bit is the key to their entire spring. By next Saturday we should know a bit more.

Ready To Brawl? Is this the year I finally notice Maxim Iglinsky? He was 8th in de Ronde while I was standing there watching, so you'd think I should have seen him coming. [Stupid Jupiler.] Bozic gives them a sprinter, and plenty of eyes will be on Jacopo Guarnieri, the kid who won a stage in Driedaagse de Panne last year. In terms of overall quality there is a definite dropoff happening at this stage of the rankings, but Iglinsky alone gives them a chance.

Something about the Gorilla strikes me as very confident and anxious to prove himself once and for all. This is a team that won't get much attention, and expectations are dwarfed by OPQS's. So when they win KBK, look out.

Ready To Brawl? Confession, I don't feel like re-ordering things after writing 90% of this post prior to this morning's stage. And Meersman, strong as he looks, isn't on their cobbles startlist, being more of a stage-race climber. Until Jurgen Roelands gets back on his bike, this is a thin classics team. But Greipel keeps them relevant in at least three races.

Dropping out: GreenEdge, who haven't done anything wrong per se, just haven't made an impression yet; Project 1T4I, whose dual sprint hopes have looked a tad slow. [Update!] GreenEdge opened their account with the TTT win, so look for them to crack next week's poll if they crank things up in Tirreno-Adriatico.

Thought about: Farnese Vini, who might have a nice duo working for them if Pozzato gets fit and Gatto can handle the cobbles.