Tirreno-Adriatico Stage 2: Cav Still the One

Share All sharing options for: Tirreno-Adriatico Stage 2: Cav Still the One 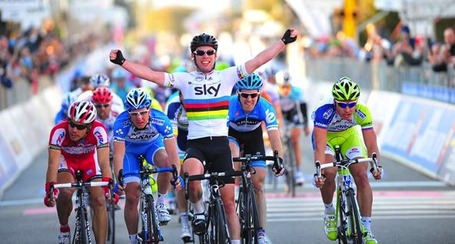 World Champion Mark Cavendish finished off another sprint today, this time by reacting to a nifty Garmin-Barracuda move which put Tyler Farrar in charge of the sprint, perhaps 20 meters too soon. Farrar, who has gotten lost in traffic a few times this season, opened up the charge in control of his destiny, with Robbie Hunter pounding their way for the line, but faded in the last couple seconds as Cavendish came by on his right and Oscar Freire slipped past next to Cav for second. Cavendish, who had one Sky escort left, simply had the superior speed, and shed his leadout, closed the gap on Farrar, and came by for the win.

Pretty straightforward stage today, with two Italians on a looooong, hopeless breakaway til the late stages, followed by the sprint teams getting organized. Sky (Cav) and GreenEdge (GC lead) did the real work, but there were plenty of other teams liking their chances enough to take a turn on the front. Few tried to upset the applecart, though Greg Van Avermaet and Enrico Gasparotto took a brief flier.