Share All sharing options for: Drenthe week! Chloe Hosking wins Drentse 8, and a look ahead to the Ronde van Drenthe World Cup

It's a very special week in the North-East of the Netherlands, as the women's peloton launch the 2012 World Cup with three races.... Drenthe week!

Below the jump I'll tell you all about Drentse 8 van Dwingeloo, and give you a preview of the Ronde van Drenthe and Novilon Eurocup. And if, as in previous years, Saturday's race is going to be shown live, I'll edit it in - if YOU see anything about live racing, or anything else you find that's fun, add it to the comments!

EDIT! There's still confusion about whether Ronde van Drenthe will be live or not. Who knows? If it is, it'll be on RTVDrenthe. The race starts at 11:00 (10:00 GMT, 05:00 USA Eastern, 02:30 USA Western, 21:30 Canberra Australia) and is due to finish roughly around 14:45 CET, so maybe check every now and again from the start? If it's live, we get one of the rare, but always awesome moments for women's cycling fans - livethread!!!

So, Drentse 8 - named after the shape of the course, 47km in a figure of 8 around Dwingeloo, which the peloton ride three times - is probably the flattest of the three races. There were lots of breaks throughout the race, but it came down to a bunch sprint - and it was a huge day for Specialized-lululemon, as Chloe Hosking took the biggest win of her career so far, ahead of World Champion Giorgia Bronzini and living legend Marianne Vos.

Marijn de Vries described the race so well in 140 characters:

As expected: no mercy for each other at International Women's Day. Strange race. Sometimes very hard, sometimes soooo slow... #drentse8

Dutch sprinting is hard - with cobbles and non-stop attacking and today it was complicated by a hailstorm, which can't have been fun. There were so many attacks and catches - the peloton fractured into groups and reforming throughout the race, including an elite group that had including a small group of Marianne Vos, Judith Arndt, Emma Johansson, Emilia Fahlin and Carmen Small McNellis (who deserves a mention for the fact she seems to have been in attacks all day) - I am in awe of the work that must have gone into catching those riders, especially since their teams wouldn't have been doing anything to help! Trixi Worrack (Specialized-lululemon) won the sprint competition (made up of 5 sprint points along the course) and escape artists and groups gained two and three minutes each - including one group that had three minutes at 30km to go - but the chase was relentless, and by 20km to go (or thereabouts, they were caught, and it was all about the bunch sprint.

As Bridie O'Donnell tweeted, it's fantastic to see Hosking win - she's such a tenacious character, who made her own way from Australia to the European peloton.

congratulations to @chloe_hosking taking the win in Dwingeloo! 3y ago she self-funded a season w Holland Moving Ladies, now her 1st big win

If you haven't already watched the video, do it now, and see Chloe crying with happiness at the end of the race!

And look at all the awesomeness in that top 10 - Emma Johansson, clearly recovered from her double collarbone break! Marianne Vos returning to the roads for the first time, after winning the Cyclocross World Champs! And Megan Guarnier, who Jen interviewed very recently! Oh happy days!

I rhapsodised (with videos) about this race in my 10 races to watch in 2012 story, but it's probably time for a proper course preview. It's the traditional route, looking like this: 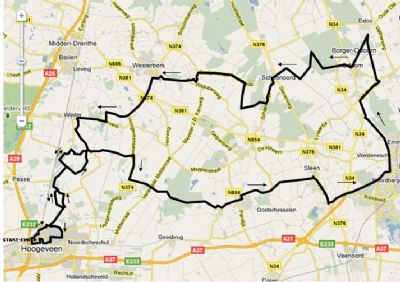 The 132.8km race leaves Hoogeveen and hits the first of three ascents of the VAM-berg 10km from the start, before taking in three cobbled stretches in the first half of the race - sharp, mossy cobbled lanes through Dutch forest, every rider will want to enter first, as these are traditional attack points, and if you don't have position, you can end up with nothing. There are 3.7km at Exloo, 50km into the race, and 5.5km at around 67km. The race then loops back through the Dutch farmland - no more cobbles, but it's flat, open, and there's always a lot of wind - and two more VAMberg climbs ahead.

"What IS the VAMberg?", you might be asking, if this is your first time reading about this race? Well, we're in the Netherlands, and it's mostly flat, except for this one, manmade hill. The VAM stands for "Vuil Afvoer Maatschappij" - "Waste Disposal Company", as it used to be a regional rubbish dump, a real eyesore, until the locals decided to make it into a feature, grassing over it. It's 56m above sea-level, and averages a 9.7% gradient (16% in places at one point!), and you can see the Climb By Bike profile right here.

They hit the VAMberg for the second time at 47km to go, race back into Hoogeveen and then ride out to do it all over again! It's a great place for attacking - and with only 12km left after the final climb, it can be hard to catch escaped riders. It's a race that can go any way - bunch sprint, escape group, solo attackers - which is one of the reasons it's so exciting!

If you're not yet convinced, then you might be by our by-now-traditional airing of one of the best cycling stories I know. In 2010, Café favourite Bridie O'Donnell got lost on the way to the race. And accidentally ended up in the middle of a WWII battle reenactment, complete with tanks. Where there was a radio broadcast going on, which caught one of the most embarrassing/funniest exchanges in cycling. I'm sure she'd rather we forgot all about it, but sorry, Bridie, you are a legend!

So, all in all, fun times ahead, except perhaps for the riders! But it's ok, if riders don't get the luck they wanted, the next day they have another opportunity to try it all over again.

Traditionally this race has been even harder than Drenthe, with four ascents of the VAMberg, and a map that's satisfyingly confusing - but this year it looks more like a simple loop. There are two maps on the racepage - but the racebook makes it more likely that it's143km, four laps of a course that starts and finish in Coevorden, which looks as flat as you might imagine. That will make it an easier race, in one sense, but the women have a habit of seeing that as a challenge and attacking even more than usual! 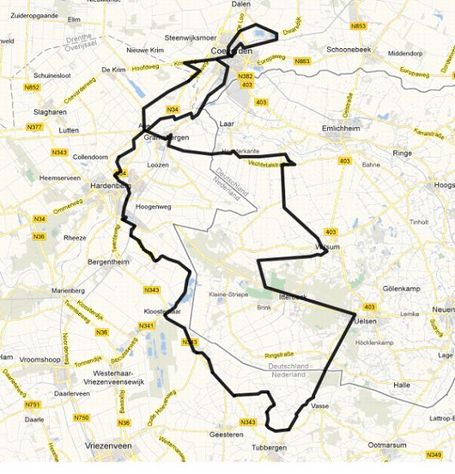 So, that's what we have to look forward to! If you have any questions about any of this, ask in the comments - and as always, keep checking back for blogs, photos, information and anything else we find out about Drenthe week!