Hey! Wake up, get out of your post-cobbles hangover and smell the coffee! The Ardennes are coming! Oh, you need some hangover food to get you through the first part of the hangover and make you feel human again? Okay, I can do that. And what better for hangover food than nice, meaty, gossip with a side of belgian waffles?

What do we have in store? Controversy! Opinionated rankings! And fun in general. So, if you don't want to forget the cobbles quite yet, stop in and see the final run-down of who came out ahead or behind over the past weeks. 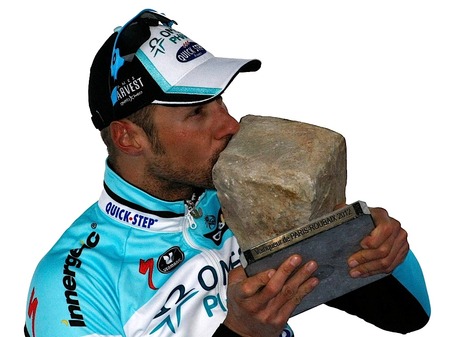 Tom Boonen: I mean, I think I would seriously get shot and excommunicated if he weren't put in the top slot after a historic cobbles campaign. 4 races in a row, two of which were monuments. The only guy to do the Flanders-Roubaix double twice. And to think that he had, according to some, the second longest solo breakaway in recent history? Surprising under the worst weather conditions, but especially so with how nice the weather was on Sunday.

So, where does Boonen go from here? Amstel Gold next Sunday, then a break for a bit. Don't you think he's deserved one? Think of how much pent-up partying there is! Methinks he will need more time to recover from that than a month of racing on the bumpy stones.

Pippo Pozzato: Poor Pippo cannot seem to catch a break. He gets second at Flanders, was the rider who almost cracked Boonen on the Paterberg, and he catches flak? In his defense, the fastest sprinter doesn't always win after 260km, the one with the most left in the tank usually does. And Pippo can be forgiven for thinking his finishing speed - which isn't slow, if you remember - would be sufficient to win the sprint given how close Boonen was to cracking earlier. And how can I consider Pippo a winner after crashing out of Roubaix?

Simple. Pippo is back to his impressive best. That "new lease on life" phrase is hackneyed - certainly - but it does fit. Although if I hear one more "strongest rider" quip involving him or see another praise re-tweet, I'm going to demote him to a loser.

Taylor Phinney: No, Chris did not make me put Taylor in here (though I'm sure he's pleased). But how could I not? Dude was ACES yesterday. 15th in his debut Roubaix after doing a ton of work for the team early on. So much for the 200km barrier and this dude.

Sebastian Turgot: How many times did the dude attack in the last 100km of Roubaix? And he still managed to win the sprint for second? I'm suspicious his bottles were laced with espresso, not electrolyte mix.

Everyone but Phil Gil: Gilbert doesn't look fast, and the Ardennes start tomorrow. Well, kinda, he has til Sunday before they really start... but does that really matter? Everyone else is licking their chops at the thought of a race where the outcome isn't 95% certain on the start line. Especially Andy Schleck.

Fabian Cancellara: While he didn't win E3 or Ghent-Wevelgum, he looked like one of the strongest riders (if not the strongest rider). And then, with 60km to go in Flanders, an errant water bottle in a feed zone toppled this god. Also a loser? Everyone who thought they could beat him at the Olympics - or really anything he wants. Dude has a score to settle and won't take no for an answer.

Team Sky: You have to feel sorry for the dudes. They chased down the dangerous 10-man break in Flanders (did you see Bernie Eisel on the front? Or, specifically, his face... It hurt them to close it down too!) and came away with little. And then when they had the deck seemingly stacked in their favor with 60km to go in Roubaix, they only came away with fourth and caught much of the flak for letting Tom Boonen sneak away. Deserved or not, they've gotten the short end of the stick over the past 10 days, and for that.... they cannot be winners.

Alessandro Ballan: Wait... two podiums in Holy week? Are you kidding me, he's a loser? No, I am not. You see, Ballan had perhaps the worst luck of all the contenders who actually remained in the races. He was in a three-up break with Boonen and Pozzato in Flanders that guaranteed him third place. And then in Roubaix? He catches the flak for letting Boonen slip away with 56km to go. While he is back to his best (lest Mantova actually come to a conclusion?), I struggle to see him winning a monument in the rest of his career. Like Nibali in San Remo, he's the perfect breakaway partner - he'll get you free, he can help set pace, but he'll never beat you in the sprint. Unless your name is Leif Hoste, and we all know not many people own that moniker (or that slow a "sprint").

Also, getting called "third rate", even by crazy old man de Vlaeminck, has to sting.

Cobbles fanatics: You have to deal with Gav's and my love for the Ardennes all over the front page now. Sorry... but not really.

So there you have it. The incomplete ramblings of an under-caffeinated fan. But if I've managed to make someone chuckle or prompt some lively discussion, I will have done my job. Have at me, folks!

Photo copyright by Patrick Verhoest and used with permission.