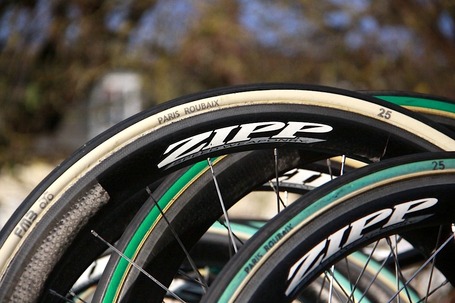 Yes it is time for the skinny guys to have their assault on the Ardennes, but before Jens posts "Brabantse Pijl Live" there is still time for one more post about my favorite race of the year (and every year), Paris-Roubaix. But rather than talking about who didn't do their fare share of pulls, or why Sky couldn't pull back Boonen, or why Euskies even bother to toe the line in Compiegne, let's focus on the important stuff. The bikes.

Bike Radar did a nice piece on the different machines at the start line on Sunday. As always, models were chosen that accommodate larger tires, or offer some dampening properties, or slacker angles. Regardless, in most cases these are not the bikes made for climbing the Mur de Huy. Additionally there were articles about Lars Boom's Giant TCX Advance Cross bike which returns for a second straight year, and is a personal favorite of mine, but we certainly can't ignore the winning bike of Tom Boonen and a new favorite the Europcar Colango Cross Prestige (complete with Campy Canti's.. that I need to have..) ridden by runner-up Sebastien Turgot.

Cyclocross bikes are no stranger to the cobbles of Northern France. And for Lars Boom's 30mm (!) tires, they are practically a necessity. But the trend which I will credit Specialized with, is around the development of race-ready bikes with larger clearance, longer wheelbases and elastomer material at various positions in the frame intended to provide a sort of shock absorber. FDJ's LaPierre Sensium 2 frame also employed a small elastomer element on the seat stay above the brake. The Specialized SL4 Roubaix has an updated design where the frame has larger "zertz" inserts that are no longer housed completely within the outer structure of the frame, but are now wedged in to an open pocket in the frame which I suppose moves them from a dampening plug to an actual suspension element.

The Trek Domane takes this one step further (as was discussed earlier) with a virtually active suspension. Unfortunately we did not get to see it in action under Fabian Cancellara on Sunday. Another bike of interest was the Movistar Pinarello Dogma K, which I am speculating is a supercharged version of last year's KOBH.

Carbon wheels are a permanent fixture now at Roubaix, especially with all the wider rim models available but there were still some sightings of my old favorite the Ambrosio Nemesis, as well as a 23mm wide, boxed rim American Classic offering.

I dropped a hint to my favorite bike on Sunday but what was yours?