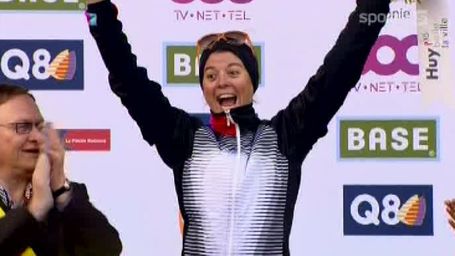 World Cup round 4 - and such a dramatic race, according to the live tweeters Richie Steege and Bart Hazen - for good and bad reasons. I'll tell you how the race unfolded below the jump, with full results - and I'll edit in any video when I find it - and as usual, the comments are the place for post-race blogs, photos and all the other things we find - especially updates on the various riders who DNFed - including Emma Pooley, who crashed early in the race, and then was hit by a race moto in the final loop...

Edit: Video of the podium and the end of the race - thanks Ted!

Edit again: Video interview with Stevens and Vos after the race - and Edit 3! More video below the jump!

The women start in Huy, riding the same last 123km as the men - the large loop with the Côte de Peu d'Eau, Côte de Haut-Bois, Côte de Groynne, Côte de Bohisseau before the 1st climb of the Mur de Huy, then the 31km loop with the Côte d'Amay and Côte de Villers-le-Bouillet, before the final climb and finish on the Mur. It was a nasty day for riding - cold, windy and rainy, and the peloton were nervous, with a large crash in the early kilometres. Valentina Scandolara (SC Michela Fanini Rox) was one of the early attackers, but it was the Australian national champion, Amanda Spratt (GreenEdge-AIS), who made the first break of the day, attacking before the Côte de Haut-Bois, and staying away for over 50 km. Her gap grew to over two minutes, with Inga Cilvinaite (Diadora-Past Zara) and then Megan Guarnier (Tibco-To The Top) chasing her - but we all know what happens in Flèche Wallonne - the Mur de Huy!

By the time Spratt reached the outskirts of Huy for the first time, the gap was dropping fast - and behind her, the big riders, lead by 2010's winner, Emma Pooley, destroying the peloton as they reeled in the young Australian. She was caught, and Pooley (AA Drink-Leontien.nl), Evelyn Stevens (Specialized-lululemon) and Emma Johansson (Hitec Products-Mistral Homes) lead a group of 25 riders over the top of the climb.

The group caught their breath, before disaster for Pooley. She had already had two mechanicals and bike changes in the race, including being hit by a race motorbike, destroying her bike. After all this, she was battered and bruised, and when her rear mech failed, there were no more bikes for her, and she had to pull out - but thankfully with no major injuries - but gutted to have to leave the race, and not get her chance for another win.

The front group kept their pace high - and then at 14km to go, three very dangerous riders were able to escape - Lucinda Brand (AA Drink), Linda Villumsen (GreenEdge) and Clara Hughes (Specialized), soon getting 45 seconds on the group. Hughes and Villumsen are time trial specialists, and working together could be devastating - and Rabobank saw the danger, working on the front until their key rider and defending champion Marianne Vos jumped off after them. Only Evelyn Stevens could match her - and the two riders caught the leading trio at 3km to go!

At this point, it looked like Vos was getting ready to repeat last year's victory and take her fifth Flèche title - but the other riders weren't ready to give up. Lucinda Brand attacked on the slopes of the Mur, and was caught by Stevens, before Vos attacked at the steepest spot. Only Stevens could hold her wheel - and then, as the gradient relaxed, attacked herself. Vos tried to hold on, but Stevens - and the tough race - were too much for her - the American taking her first ever World Cup victory, and the biggest win of her career!

Stevens has been building up to this - finishing second at the GP de Plouay last year, and challenging Vos on the final climb of the Trofeo Alfredo Binda, before a crash took her out of contention. Stevens famously came late to cycling, riding her first race in 2007, and giving up her Lehman Brothers job in 2008. Read more about her in her most recent interview - including more of her story, her Olympic dreams and her lucky, battered sports bra! - and in this interview with her by Jen last year, right here at the Café!

And it seems as though the peloton have finally worked out how to defeat Vos - making her team, and especially her, work hard. Specialized-lululemon had a beautiful race, with riders in all the key moves - the Hughes attack at the end, with Stevens marking Vos, gave them opportunities on all fronts!

It was a great race, too, for GreenEdge-AIS, who rode agressively throughout - and fantastic to see Villumsen on the podium again. Mixed blessings for AA Drink-Leontien.nl - Pooley's mechanical disasters, and Jessie Daams crashed out - but a fantastic result for Lucinda Brand!

Although Vos ended in second place, she extends her already impressive lead in the Road World Cup standings:

Next up, a weekend of sprinty races, with the Omloop van Borsele and GP Roeselare, while the Road World Cup moves to China for the tour of ChongMing Island on 12th May. Vos hasn't ridden this one before - will she change her habits this year, or will it give everyone else the chance to catch up with her?