Share All sharing options for: Winners and Losers: Ardennes Edition 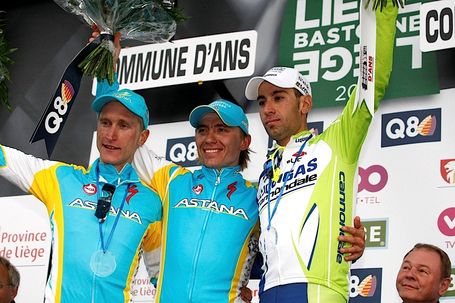 Man, what an exciting Ardennes season. I mean, who could have predicted those races? Except for Fleche Wallone, that is - I think we all knew deep down that Joaquim Rodriguez was going to win that one. At the least, we hedged our hopeful bets by putting money on him too.

One of the reason the past week was so exciting, at least in my opinion, is the bevy of winners and losers we saw that we weren't expecting. Some people were scrambling around and looking under their hotel beds for their form while others looked down at their legs in disbelief. Did they really just do that for me? But, enough with the preliminary words... here are the big winners and losers from the three Ardennes races!

Astana: Man, did these guys put on a show or what? Gasporatto and Iglinski? They're solid riders. Let us not forget how Iglinski has won Strade Bianche before and was second this year or how Gasporatto is a former Italian national champion. But those wins weren't of the same caliber as their wins at Liege and Amstel. Once struggling to justify World Tour status and resorting to keeping Vinokurov on the roster to keep enough points to do so, Astana is now ranked fourth among all ProTeams. Talk about a turnaround. Party time in Kazakstan!

Joaquim Rodriguez: Finally getting the monkey off his back by winning Fleche Wallone. Good thing too, because he imploded in a big way on the Cote de Saint Nicholas the following Sunday.

Fleche Wallone Viewers: Every year, the formula is the same here. Little attacks, nothing to threatening, until the slowest bunch sprint in the world up the Mur de Huy. This year, the organizers got a little tired and added two climbs to the final circuit around Huy. Neither are too problematic for the bunch - about 1.5km at 5-7% for both - but do make the final 20km more difficult. Supposedly, they give attacking riders more ground to play with?

This year, they seemed to do so. Ryder Hesjedal and Lars Peter Nordhaug went on a rampage with less than 15km to go and made the most exciting racing Fleche Wallone has seen in years as they hit the final kilometer with 13 seconds lead. Of course, they needed about 20-25 seconds to have any real chance at winning... but at least they tried, no? I for one approve of this kind of racing by guys who could go top 10 but not win. I'll buy you both beers if you are ever in the neighborhood, k?

Thomas Voeckler: The man with the magical tongue turned the Classics season on its head, placing 8th at Flanders and winning Brabantse Pijl before lining up at Amstel Gold. Punchy riding is what the Ardennes are about, and if there is one thing Voeckler is good at it is punchy riding. But, strangely, we had never really seen him truly mixing it up in the Ardennes races before. But Tommy is riding like a man possessed this year and finished fifth at Amstel and fourth at Liege. Does anyone dare think what this man will be like in France in June and July?

Side note? I think I've been watching Tommy too much this season. I'm seeing a disconcerting number of pictures of me in races with my tongue hanging out these days.

Oscar Freire! We know Oscarito has a good record at Amstel Gold. Despite it being a climber's race and him being a sprinter. He's gone top ten numerous times, but never threatened the podium... until this year. Working for his team captain Joaquim Rodriguez, Oscarito attacked with 7km to go and built up a lead of 20 seconds near the finish as rival teams let him dangle, thinking his ploy to get them to chase was oh so obvious. But Oscarito? He's a strong and resliliant little fellow. We all knew he would get caught and passed on the Cauberg, but we also crossed our fingers hard and hoped he would miraculously win. He didn't do that, but he was only caught in the final 300m and finished fourth. Chapeau! Or whatever the Dutch equivalent is!

Also? Did anyone notice he was 24th in Liege-Bastogne-Liege? In the same group as Frank Schleck. Not bad, good sir. Especially since I'm assuming you were working for J-Rod earlier in the race.

BMC: Wherefore art thou Phillipe? And Van Avermaet, what happened to all the fast you had in March? Gilbert had a strong finish in Fleche... but that is by far the "easiest" of the Ardennes races. And BMC burned up all its riders, including a very on form Tejay Van Garderen, crushing any hopes of attackers in Liege. Surely it would have been better to send Tejay or someone else up the road on/after La Redoute instead of just using them to pull the pack around? At least the other teams would have to bear the burden of chasing then.

Vincenzo Nibali: Almost a winner. After all, he got his best ever result at Liege - or any Ardennes classic - by going second on Sunday. But the way in which he got second? L'ouch. Going solo from the top of the Aux Faucons only to get caught and left for dead with a kilometer to go? Two short minutes from victory? Man, that has to sting.

If there is any doubt in your minds, just look - this face certainly doesn't say "I'm a winner!" 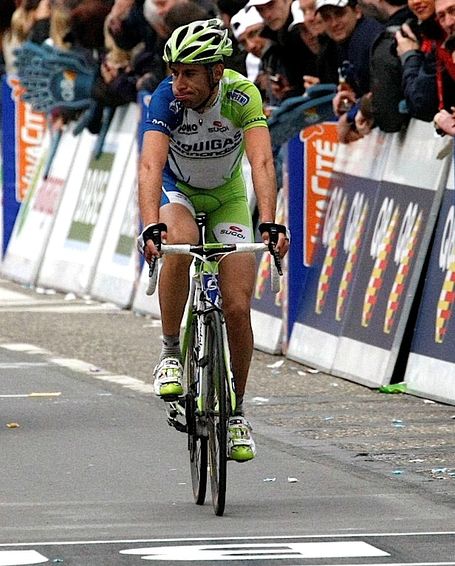 The Brothers Schleck: Andy made a ridiculous attack at Fleche Wallone (want to contest that? Compare it to the timing of Hesjedal's escapade) and was not seen at all any other day of the week. And Frank had all the bad luck, getting a flat in the finale of Fleche and riding with a cinder block strapped to his back in Liege. For all the expectations put on them this week, they fell flat in a big big way. Lets hope Uncle Johan has something special up his sleeve for the Tour.