Share All sharing options for: Talking Giro d'Italia with Peter Stetina of Garmin-Barracuda 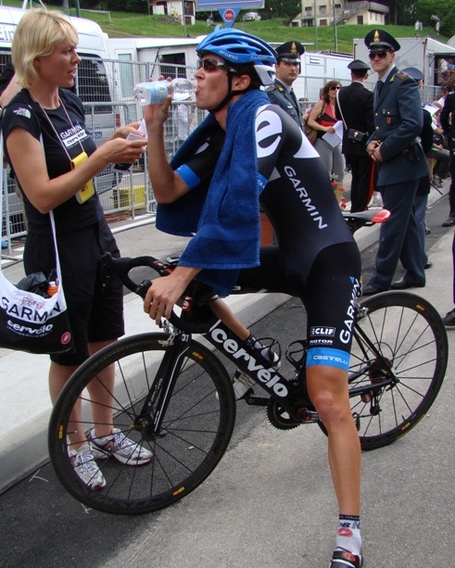 When the Giro d’Italia starts this weekend in Denmark, Peter Stetina of Garmin-Barracuda will be at the start for his second ever grand tour and his second trip to the Italian grand tour.

"I was just on a high all through the Giro last year," he said. "It was like a circus and all the excitement, and I was finally in the big show. I was just so happy the whole time."

Stetina thrives on Italian racing and is looking forward to his return to the Giro. "The passion is really amazing," he said. "The whole country turns pink for three weeks. It’d be cool if you could have a really accurate satellite photo and just see the pink crop up in a line around the country following the Giro route."

Below the fold, Stetina talks about his role at the Giro, why pro cyclists complain so much, and where the high mountain stages are won. Spoiler! It’s not where you think.

At Romandie, Stetina’s role was to go on the attack and try to join the break every day. He spent two days in the break, while Talansky scored a career-best second overall. Stetina expects to ride the Giro more conservatively. “Honestly, I was dead-tired at the end, because I was attacking every day. You can’t do that for three weeks,” he said. “I enjoyed it, but I would not want to do that for the Giro.”

Instead, Stetina will ride as right-hand man to Garmin-Barracuda’s team leader Ryder Hesjedal. “I’m going to stick with him,” said Stetina. Hesjedal, who finished sixth in the 2010 Tour de France and has a stage victory at the Vuelta a España to his credit, will ride for the general classification at this year’s Giro d’Italia. “I have my aspirations for the GC while helping Ryder,” said Stetina. “If I’m helping him, and if I’m really able to help him to the best of my ability, I’d actually be able to have a high place in the GC anyway.”

Among Stetina’s responsibilities will be making sure Hesjedal is at the front when the climb begins. Watch the run-in to any of the major climbs and you’ll see a massive battle for positioning. “That’s 80% of bike racing,” said Stetina. “That’s more than the climb itself.” Many times Stetina has recorded his highest power output of the stage during the ten minutes that precede the finishing climb.

This is where a strong team is essential. “Only the super talented riders can move up and attack later,” he explained. “Usually if you have to spend all this energy moving up, you’re already redlining, while other guys are doing tempo when they start.” If the team leader has to make a big effort to get to the front while his rivals have been sitting in for the first five minutes of the climb, he is going to be at a massive disadvantage.

When Stetina studies the road book the night before each stage, he pays more attention to where a climb starts than where it ends. “I need to remember at what kilometer the climb starts at. The finish is arbitrary, once you’re on the climb, it’s the legs do the talking,” he said. Stetina also studies where the steep sections of the climb are. “You need to know, for example, if it’s bad at the beginning, but it’s okay to go in the red, because it levels out a bit or whatever,” he explained.

The riders tend not to study the course too far ahead of time. “I looked at that cool map that they show with the map of Italy and the lines around it,” Stetina said laughing. He has checked the mountain profiles, but he waits until the night before to absorb the details. “For the Giro, you get a race bible, it’s like a 300 page book, it’s got translations in three languages, it’s so descriptive,” he explained. Because of the level detail, the riders can’t keep the whole race in their minds at once. “We have to study to the T, so it’s like cramming for an exam. You just have to get it all in your short-term memory,” he said. “It’s impossible to remember that five days out.”

Stetina is not sure why Italian racing suits him, but certainly the many climbs are part of it. “I’m not a heavy guy so I don’t have that power,” he said. “If it pitches more toward 10% than 5%, it’s actually easier for me to be at the front.” Stetina finds the racing similar in Italy and Spain. “They really do have an explosion. Italy and Spain, they just do have explosive climbing, which I really like.”

There is also pressure on the legs all day in the modern Giro. Forget what you’ve heard about piano when the cameras are off. Stetina says it is hard all day, which he feels also suits him. “There’s an attrition aspect,” confirmed Stetina. Some riders thrive when the race goes consistently hard, where other riders prefer to ride more relaxed before the key moment of the race. “Guys, who are good at being economy riders, they’re really good when it’s chill, and they can light it up on the final climb,” explained Stetina. “Just the way the Italian racing plays out even before the final climb, it somehow suits me.”

One aspect of the grand tours that Stetina feels he still needs to learn is how to handle the rest days. Every rider responds differently to the stresses of stage racing. For some riders, the rest days mean complete rest. “David Millar doesn’t even touch his bike on a rest day, and that works for him,” said Stetina with a hint of envy.

Complicating the learning curve, there are only two rest days during each grand tour. “You only get two shots at it. The first two weren’t great, so I’ll try two different things this time and see what happens,” explained Stetina. He suspects he is not cut from the same cloth as Millar. “I have a hunch that I’m more on the I have to do three hours really piano. That kind of sucks I have to do more to get the same effect.”

Complaining off the bike is part of the ritual of pro cycling. “As a cyclist, it’s your second job to bitch and moan about every little thing,” he said, laughing. Stetina explains it as a way to deal with the stresses of racing. Instead of complaining about how hard the sport it, riders will find other directions to focus their ire. “I can’t tell you how many times I’ve seen guys go off because there’s no almond milk on the breakfast table. It’s things like that,” he said.

Though the long transfers at the Giro are often a target of rider criticism, they rarely bother Stetina. “I don’t have an issue with the bus. For me, it’s just an apartment with wheels,” he said. “I sit in a big ol’ bus seat and I get coffee, and I have a fridge in there with drinks.” It isn’t all that different than sitting in a hotel room, he says. Stetina also spent Monday loading up his iPad with movies specifically to pass the time during the transfers.

Stetina counts his iPad as one of his essentials for long stage races. He also always packs his own bottle of Chai from Colorado-based company 3rd Street Chai. Stetina is a fan of the Chai latte. “I’ve got a camelback bottle full of Chai concentrate and I just ask for hot milk instead of a coffee and boom!” It is one taste of home that Stetina does not like to live without. “That’s my vice,” he said, laughing.

So it’s off to the Giro for Stetina and his Garmin-Barracuda team-mates. They’ll study their roadbooks each night and go to sleep to dream pink-tinted dreams. And maybe one day soon it will be Stetina’s turn to be the Garmin Surprise, the talented rider who appears to come out of nowhere and finish in high in the general classification. “That would be cool, wouldn’t it? That would be fun, it would be a great story!”