How Cav Won The Green Jersey, by Ned Boulting

Share All sharing options for: How Cav Won The Green Jersey, by Ned Boulting 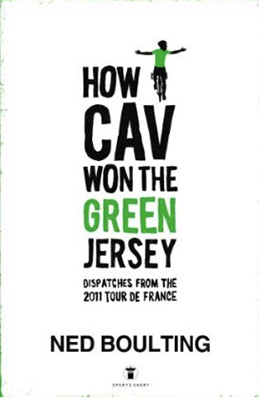 Ned Boulting's How Cav Won The Green Jesey opens with Mark Cavendish in the basement of a Soho pub - the Bar Italia, if you feel like making the pilgrimage - and making an interesting point to the assembled hacks hanging on his every word. He does this by asking them to name the last three winners of the Green Jersey[1]. Boulting, at this point, carries on doodling - a swordfish piercing a football, how very, very Freudian - and fails to answer Cav's question. And that, it seems, is actually the answer. No one knows. No one normal, I mean. Philippe Gilbert is right: the Green Jersey really isn't all that important. And I say that as a proud Irishman who took pleasure in the consolation prize Sean Kelly took away from four Tours de France.

Oh, for sure, it's better than a slap in the face with a wet kipper (most things are, unless you have a fish fetish) but, in and of itself, does the Green Jersey really matter? Well, here let's go back to when Sean Kelly was in his pomp and glory. Because, back then, fuck yeah, that geansaí glas was almost as important as the geansaí buí. In Ireland anyway. Maybe even in Great Britain too, Kelly did speak a form of English, though I think they were hotter on the Scottish-accented polka-dots. And that's the point: when it's one of yours in with a shout of winning, these things matter. These things always matter to the people to whom they matter. And that's why they matter.

And so to How Cav Won The Green Jersey. Once upon a time, cycling books used to be published in one format one year - hardback or trade paperback - and then, the next year, put out in paperback in "new and updated" form. The "new and updated" only ever referred to an extra chapter bolted onto the end - never to the correction of errors in the original text - a new chapter which sometimes tipped the original book over into something it was never meant to be. Now that we live in an iTunes age, where songs have been decoupled from the albums that used to house them and are sold separately, I suppose it was only inevitable that the same would happen with books and individual chapters would be sold separately. Because let's be honest here folks: Ned Boulting's How Cav Won The Green Jersey is really just the extra chapter that would normally be pinned on to the next edition of the original How I Won The Yellow Jumper. Only now it's been decoupled and sold off for a couple of quid a download.

As with Yellow Jumper the text here is interleaved with photographs. Back in the dead tree format of Yellow Jumper the pictures were badly reproduced, here they appear in all their low-fi digital glory. Overall, adding together the photos and the electronic format, the whole thing has the feel of a rather long blog post about it. While Green Jersey is - I believe - the first dedicated digital-format book to make the Café Bookshelf it isn't actually the first book on the shelf to have been read in digital format, several earlier additions to the shelf were delivered in soft copy rather than hard. Overall, in my opinion, the format doesn't really matter much. A book is a book is a book, whatever the medium.

So what is it then? Well it's a 20,000 word ramble through Ned Boulting's very own, very peculiar Tour de France. Or, in other words, more of the same as was delivered in Yellow Jumper. Boulting himself describes the book - booklet? bookella? do these things have a proper noun yet? - in this manner:

"This is the story of the lesser-known heroes; the Johnny Hoogerlands, the Thomas Voecklers, the hitchhikers, the maniac press drivers, Norbert Dentressangle and the greatest ever Tour de France."

Which means we get a little bit about Cadel Evans winning the Tour ("He defended his way to the win. Brilliantly, arguably, but demonstrably short of panache.") and a little bit about Andy Schleck losing it ("I stood talking to him in Paris, worried that I might accidently let slip his nickname, Andy Schleckond."). Then there's a bit of gushing gumph about Cav and Wiggo (and spiffingly self-referential stories of both of them being presented with copies of Yellow Jumper), there's Voeckler ("the plucky French hero") and there's Hoogerland ("His bravery told us what we all longed to hear about the courage of the riders.").

The hitchhiker referred to is some gap-year student - teen-aged mop-headed, blond-haired, draped in a Union Jack: another BoJo in training? - who thought it'd be a really jolly wheeze to hitchhike (well, actually, blag) his way around the Tour de France. The maniac press drivers are from TV2 and Boulting registers his moral indignation at the driving skills of the France Télèvisions crew by poking his head in a car window and telling the occupants he was writing their registration number down. Norbert Dentressangle is, in case you're not aware, a French version of Eddie Stobart. And if you don't know who Eddie Stobart is then consider yourself lucky to have a life.

Since reviewing How I Won The Yellow Jumper I still haven't got around to clocking Boulting - or ITV's Tour coverage - on telly (I'm still allergic to Phil'n'Paul, they continue to bring me out in a strange desire to stab myself with hot knitting needles). To retain the frankness of the last review, I still don't really know who Boulting is or quite what it is he does that seems to have endeared him to such a sizable portion of the English-speaking cycling audience. And that continues to be a problem for, as with Yellow Jumper, some of the humour here really does require you to have watched the ITV coverage of the race. The rib-tickling, thigh-slapping banter between Boulting and Chris Boardman requires that you to buy into the 'characters' portrayed three weeks a year on TV screens in thousands of homes up and down the UK.

Step outside the in-jokes and anecdotes and Boulting's quintessentially English hammed-up amateur abroad schtick ("Look at me, I really haven't got a clue what's going on! How marvellous!") either works for you or it doesn't. That it doesn't work for me is neither here nor there: Yellow Jumper proved to be a popular little book with some and I've no doubt that Green Jersey will go down with them just as well. As with the green jumper itself, this is the sort of thing that matters to the people to whom it matters.

[1] Those Green Jersey winners: You have Wheezy Petacchi in 2010, Thor in 2009 and Freire in 2008. After that it gets easy: Tomeke, Robbie, Thor, Robbie, the other Australian, Robbie and then Zabel's string of successes. Which takes you back to the days of Jaja and Abdu. From there it's a wee hop over Ludwig and you're back in the days of Kelly. And Planckaert, Van Poppel and Vanderaerden. Go back any further and you risk turning in a statto.

You'll find an interview with Ned Boulting on the Cafe Bookshelf.