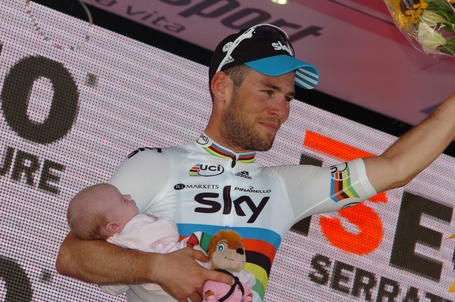 World Champion Mark Cavendish of Sky delivered another stage f the Giro d'Italia today at the end of a perfect leadout following a quirky stage to the coast of Le Marche. Cav fended off a strong challenge from Matthew Goss of Orica, while sprinters Tyler Farrar of Garmin and Theo Bos of Rabobank missed the party. It was a long, flat, dead-straight stage for most of the day as the Giro headed south and east, but as the race approached the coast it headed up some twisting climbs to the Adriatic headlands. There a couple dozen riders came unhitched, coming close to rejoining on the descent but ultimately surrendering in the final 10km as the race thundered toward Fano. Sky massed on the front, and Geraint Thomas dropped Cav off with some 150 meters in perfect postion, where the Manxman has been practically unbeatable in grand tours for the last several years. With the extra incentive of his baby daughter Delilah in attendance for the first time, Papa Cav wasn't gonna miss this one.

No change in the overall. Results!