Viewer's Guide to the Amgen Tour of California!

Share All sharing options for: Viewer's Guide to the Amgen Tour of California! 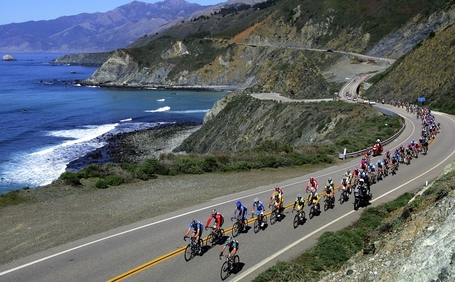 America's Biggest and Best Stage Race* kicks off edition #7 this coming Sunday, with a rolling and rocking course up and down the Golden State's rugged landscape, enough to make the pack sprinter in each of us bleed from the ears. Yep, it's gonna be a shootout, and you're going to watch. Why? Because it's beautiful, easy to follow, and you're at work.** The Podium Cafe will be chock-full of commentary, which you'll casually check in between answering emails. You're going to give co-workers evasive answers about meetings in the afternoon. You might even knock off early a day or two (after quietly slipping into the office early to watch the end of the Giro stage). Admit it. And let me help you...

[*for now] [**Western Hemisphere folks only]

Basta! To the race... Here is our Viewer's Guide to the Cali course. I know there are some bona fide Cali experts out there who can fill in details, but for the big picture, read on.

What's It About? The Levi Leipheimer tribute stage. Leipheimer has built a strong name ID with Santa Rosa, his adopted hometown, which he celebrates with his Gran Fondo. Levi has also won half of the Tour of Cali editions completed so far. His fingerprints are all over this stage, which takes in part of the gran fondo route, a chunk of Highway 1, and about 3000 feet of climbing. Unfortunately Leipheimer is in no shape to do anything on the bike right now.

Who Got This? Erm, it probably wasn't going to be Levi anyway, unless he'd spent the spring at Klodi's sprinting camp for climbers. The up-and-down will dampen the enthusiasm of quadricep muscles across the sprinters' club, but I can think of a few guys (coughPeterSagancough) who should be up to the task.

What's It About? Apparently Aptos didn't pony up enough scratch to get named as the finishing town (Aptos-intolerant?). But in fact the race finishes in Aptos. This cannot be denied. The start in downtown San Fran should make for some lovely pictures, and there will be enough coastal scenery to make you resent California forever. A couple long climbs look scary on the profile but nobody seems to be talking about them.

Who Got This? Same as the day before. Actually, with the grand depart out of the way, a Monday ride down the coast could be pretty, um, non-selective. I can think of worse things than a Kittel-Sagan showdown.

Viewing Plan: Hello Tour Tracker! I wouldn't cancel any meetings, but a conference call with the sound off is a good call.

What's It About? The reverse of the traditional stage that incudes the fairly awesome Sierra Road climb. Well, riding it in reverse takes that out of play, and the organizers have replaced it with Mount Diablo, a California cycling legend known for incomparable views and CHiPs tagging speeding cyclists on the descent. This happens halfway through the stage, however. Patterson Pass is close to the finish and likelier to make a difference.

Who Got This? Climbers could make some noise here, if they're sick of watching sprints develop, and if they like going downhill fast enough. Smart move would be to tell Nibali that the organizers are giving away a giant cannoli to the stage winner.

Viewing Plan: Last hour should be fun. Tell your coworkers you have a brief to write and cannot be disturbed.

What's It About? The one east-side stage, slogging up and down in the Sierra Nevada foothills all day, before tipping down into the Central Valley for another finish in Clovis, a town thought to have disappeared 13,000 years ago when a comet exploded over Lake Michigan. Seriously, this stage will be a geologist's and archaeologist's dream.

Who Got This? If this stage doesn't see a successful breakaway, I will drink the contents of Owens Lake.

What's It About? Pretty flat course tracing the Kern River, meaning it's not technical either.

Who Got This? The GC guys will begin showing their cards, or not (c'mon Gesink!). Dave Zabriskie heads up a pretty decent list of guys who know how to throw down against the watch.

Viewing Plan: It's possible the GC will be pretty tightly bunched, meaning you have to watch the whole thing.

What's It About? Rerun of the queen stage from 2010, although that day ended in a middlin group sprinting it out, with Sagan punking the climbers. The highlights are Angeles Crest and the 40k climb(ish) up to Big Bear Lake.

Who Got This? There is no reasonable argument to be made that this stage will decide anything, but it should get rid of most of the pretenders.

What's It About? The no-doubt-about-it Queen Stage, a virtual rerun of last year's epic ascent, apart from meaningless changes to the start. The warmup happens on Glendora Ridge Road, right from the opening gun, but the main course is the ride to the top of Baldy. This graphic will make Jimbo's eyes vomit:

Who Got This? Hoanah. He said so already.

What's It About? A circuit race around downtown LA, timed to catch people on their way home from Saturday night. It ends three freeway segments from LAX, meaning the traffic standing between the riders and their return flights to Europe is only about two hours or so. Riders will still have time to pick up a pork pie hat in the duty free area.

Who Got This? Last sprinter standing.

Preview of the combatants tomorrow!